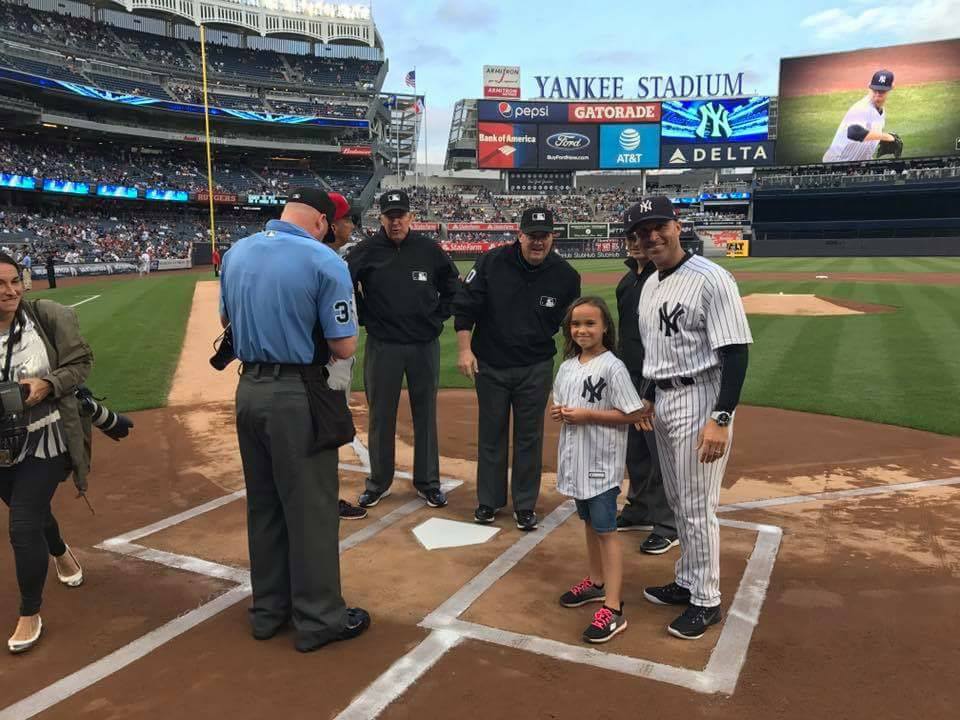 She turned to look at her daughter and saw that she was beaming. When she looked up and saw what the little girl was staring at, she understood. Her daughter always had a noticeable change in behavior when she encountered people like that. But this time was different. This time, the little girl did something her mother never expected. And her actions that day sparked a series of events that would change both their lives.

But this little girl’s incredible story actually began more than eight years earlier – before she was even born. Her mother, Mimi Jimenez, was a police officer in Perth Amboy, New Jersey. She was married to a fellow officer, Thomas Raji. Having been in the force for ten years, Thomas knew how dangerous police work could be. He encouraged Mimi to leave the police department, but she was a strong-willed woman. Then one day, everything changed.

Mimi had two children, Devyn and Gabriel, from a previous relationship. Thomas loved them and cared for them like they were his own. But he couldn’t contain his elation when, in 2008, he found out Mimi was pregnant with their first child. Again, they discussed the possibility of Mimi leaving the force. But it was still early in the pregnancy so no decision was made – until one day in August when fate forced their hand.

On August 22, Thomas and his partner were assigned to transport a prisoner to the Middlesex County Jail. While they were on Route 1 near Woodbridge, a drunk driver ran two red lights and hit the patrol car at the intersection with Green Street. Mimi, who was two months pregnant at the time, lost her 31-year-old husband. The incident forced her to find a safer job now that she was a single mother, but her admiration for police work never vanished – and she passed it on.

Fast-forward eight years, Mimi’s baby was now a beautiful and vibrant little girl named Mikayla. Even though she never met her father, Mimi made sure her daughter knew all about him and the sacrifices he made for his community and his family. Knowing that her mother had also been a police officer, Mikayla had a special place in her heart for the men and women in blue. It was heartwarming to see, but Mimi never thought it would lead to a life-changing experience.

One day, Mimi and Mikayla were having dinner at Villa Borghese, an Italian restaurant in nearby Helmetta. Mikayla loved pizza, so it was always a special treat when her mother took her out to eat some. They were in the middle of their meal when the door to the restaurant opened and someone walked it. Mimi didn’t pay it much mind until Mikayla loudly said “hello” and vigorously waved in the direction of the newcomer. Mimi turned toward the entrance.

The man who had just walked in was Joseph Quinn, an officer from the Jamesburg Police Department who had just finished his shift. When he saw the little girl waving at him, he smiled and returned the greeting. Then he walked over to a table and ordered his dinner. When he was done, he made his way to the register and asked the cashier for his check. That’s when he got some unexpected news.

A Random Act Of Kindness

The cashier told officer Quinn that someone had already taken care of his tab. He was surprised and delighted at the same time. It was not unheard of for someone to pay for a police officer’s drinks or food to thank them for their service. But whenever it happened, it was always welcome and appreciated. Officer Quinn thanked the cashier and left. But that act of kindness stayed with him.

Putting His Skills To Good Use

When officer Quinn went back to the station the next day, he kept thinking about the stranger who had paid his check the night before. Curiosity got the best of him and he decided to do some investigative work to find out who did it. He made some calls, including the cashier at Villa Borghese, until he finally discovered the identity of the good Samaritan.

The person who had paid officer Quinn’s tab was none other than 8-year-old Mikayla Raji. After the officer had come into the restaurant and sat at his table, she couldn’t take her eyes off him. Eventually, she leaned over and whispered to her mother, saying she insisted on buying the officer’s food. Mimi obliged and walked up to the cashier, telling him she wanted to do it anonymously. So she was surprised when the Jamesburg PD reached out to her.

The Jamesburg Police Department wrote a post on their Facebook page where they shared the tale of how Mikayla came to pay for officer Quinn’s tab. “Thank you for buying Ptl. Quinn’s dinner,” it read. “You have an OPEN invitation to stop by Headquarters whenever you want, and this time dinner is on us! Your dad would be so proud of the person you are. If you ever need us for anything, you can guarantee we will be there for you.” The story soon went viral.

Mikayla In The News

After the Facebook post was shared more than a thousand times, several news outlets reached out to both the Rajis and the Jamesburg PD for interviews. YouTube channel “Chasing News” met up with Mimi, Mikayla, and officer Quinn at the Rajis’ house, where Mikayla explained the reasoning behind her good deed. “They work hard and they deserve some respect and for people to do nice things,” she said. The Jamesburg police officers were so touched, they decided to do something nice for her in turn.

Part Of Her Life

The Jamesburg Police Department invited Mikayla to visit them at their headquarters, then took her back to Villa Borghese where they made good on their promise to treat her to dinner. “She has a great deal of pride that her mom and dad were both police officers,” said Jamesburg Police Chief James Craparotta. “She supports the police and feels that we’re a part of her life.” Later, they invited her to be their special guest at the Memorial Day parade. But that’s not all they did for her.

Going Above And Beyond

The Jamesburg PD set up a GoFundMe page to help pay for Mikayla’s education. “The members of the Jamesburg Police Department would like to try and help raise funds for Mikayla’s future education,” the page says. “Mikayla is a wonderful kid with a big heart who loves to do kind things for people.” So far, they have raised $15,000 of their $20,000 goal. And that’s not the only way in which Mikayla’s life has changed.

A Day She Will Never Forget

A few months later, Mikayla and her mom received the surprise of their lives. The New York Yankees had invited Mikayla to throw the first pitch at a home game. Being huge Yankees fans, the Raji family was stoked. “I can’t thank you enough for giving her a day in NY that she will never forget!” wrote Mimi on Facebook. “This is why my late husband Tommy and I loved the Yankees and I have raised our little girl to do the same!”
Must Read
European Space Agency Budget Increases By 10 Billion For The Next 3 Years
Artemis 1 Finally Launches: What It Means For Space Travel And Exploration
Clam Species Presumed Extinct For 40,000 Years Has Been Found Alive