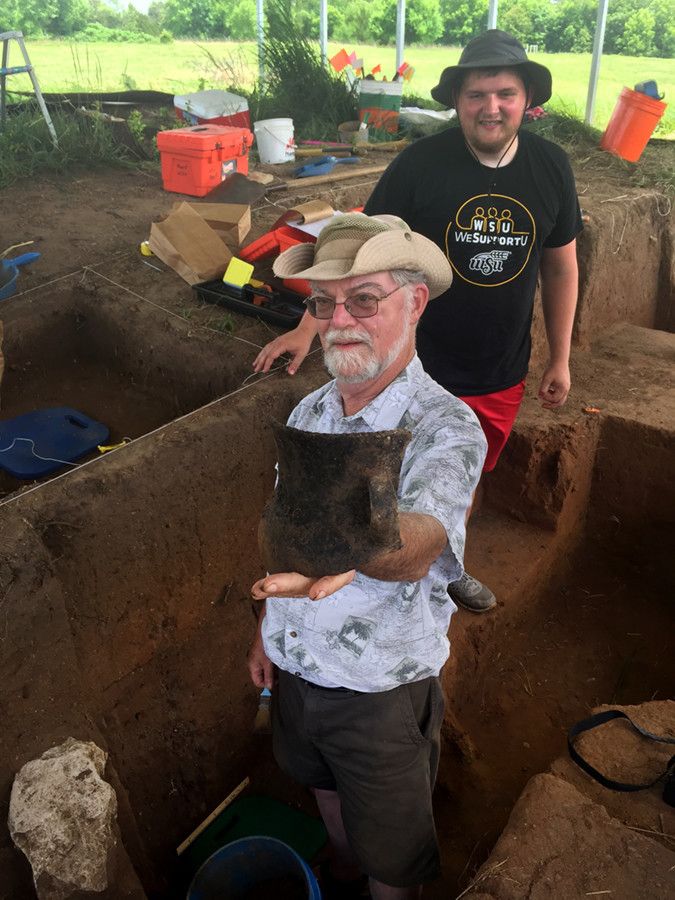 Kansas is famous for being the “wheat capital” of the world. It’s also recognized as the home of Dorothy Gale in “The Wizard of Oz.” But the residents never expected to find this in their hometown.

Donald winced. Stones dug into his knees. His picked the pebbles from the earth with his mud-covered gloves and threw them to one side. Their site had become an area of excavation—sieves, shovels, brushes, spoons—their tools of the trade. They had spent weeks chipping away at the Kansas earth, searching for something, anything that would add to his research. He shuffled to the side. He yelped at the sharp pain. This time, it wasn’t a stone.

Donald Blakeslee could never keep his hands from the dirt. As a child, he would spend his days destroyed in dirt, using whatever he could to get his hands on to get beneath the surface of the earth. For his mother, he was a nightmare. No sooner had she planted new seeds and flowers, Donald would have half of them uprooted again, replacing her seeds with toys and treasure. She thought it was just a phase. However, she was wrong.

As Donald grew, he became fascinated with history. To his mother’s surprise, he asked to visit the library when he was just 5 years old. Instead of popular Dr. Seuss and Roald Dahl books, Donald would march straight to the history section and pick the thickest and oldest book he could get his hands on. As the other kids sat in the children’s section laughing and playing, Donald sat alone in the corner with his newest discovery while his mother chatted to the librarian. But his interest soon became an obsession.

When the time came for Donald to begin school, his mother was worried. He wasn’t one for socializing. And he hardly ever made conversation with their neighbors. Instead, he always had his head stuck in a book or his hands deep in the earth. She hoped that school would make him more confident and bring him out of his shell. But Donald was destined for great things.

Donald was never part of the popular group. He wasn’t good at sports or socializing, but he excelled in his work. It wasn’t long before he began to bring up points in history even his parents had never heard of. “Did you know Cahokia in Illinois is an ancient American settlement?” His mother was always flabbergasted and always encouraging. Unsurprisingly, Donald’s teachers took an interest in the young boy.

Donald thrived in high-school. Finally, he was surrounded by people he could relate to on an intellectual level. He found himself surrounded by older students who were driven and focused on their college goals. His history teacher took the young adult under his arm, sharing books and inviting him to conferences. Donald never thought his interest would pave the way towards his future.

When Donald shared his intent to study archaeology, his peers were skeptical. But his family and teachers weren’t surprised. Nothing interested him more than the past. Every question he ever had, he would search libraries until he could find the answer. History had been his passion since he could read. But he never expected to make his own discoveries.

Donald Blakeslee went on to get a PH. D from the University of Wisconsin-Milwaukee. It was during his studies that he became obsessed with early American settlements, native trails, and sacred sites. He became president of the Professional Archaeologists of Kansas and continues to focus on the protohistoric period, a time between history and prehistory when civilizations had not yet developed a form of writing. Donald had big plans.

Ever since reading of the Cahokia in Illinois, Donald was always curious as to if there were more settlements. Now 75-years-old, Blakeslee has potentially filled a mystery time gap in American history. With the help of researches he met during his impressive career spanning over five decades, Donald believes he has located the place he dreamed of since he was a boy. And it provided plenty of treasures.

Donald used translated ancient documents and multiple forms of technology to locate a site he believes to be the lost city of Etzanoa. The Spanish conquistadors stumbled upon a city in 1601, and documented their discovery. They claimed that the inhabitants “napped beneath trees festooned with tinkling gold bells.” After years of research, Donald was led back to the unlikely state of Kansas. But what why was it the “lost city” of Etzanoa?

Since the Spanish conquistadors, many explorers have continued to search for the vast city. Less than a century later, French explorers returned to the area. However, the population had been decimated by foreign European diseases, leaving the city in ruins. The people of Arkansas City have been finding artifacts for years. But it was only when a young boy’s metal detector beeped that rumors of the possibilities spread.

For years, the residents of Arkansas have been pulling “tons” of artifacts from the earth. But one young boy found much more than he bargained from with a metal detector. Instead of usual spears and knives, this boy managed to locate a Spanish cannon shot. His discovery only reinforced Donald’s research. He knew he had to get digging.

“I wanted to see if the archaeology fit [the Spanish conquistadors’] descriptions. Every single detail matched this place,” Donald explained the undeniable similarities. The inhabitants were described as “sturdy and gentle.” In contrast to their tattooed faces, the community was friendly. That is, until the conquistadors began to take advantage of their kindness. Some of Donald’s findings were amazing.

Although the people of Etzanoa either fled or died hundreds of years ago, their impact on the earth remains. Donald used magnetometers to find “thatched, beehive-shaped houses,” storage areas, and even fire pits deep beneath the earth. He and his team now excavate the site, digging for more discoveries that would help them understand the native’s way of life.

Thanks to the conquistadors’ documents, and the discovery of the Etzanoa, Donald has been able to put together pieces of the lost city. “Lots of artifacts have been taken from here. Now we know why. There were 20,000 people living here for over 200 years.” He now believes the city was populated by farmers and hunters, and spanned across 5 square miles. Donald has finally managed to find the mystery city he’s been infatuated with since he was a boy. Without a doubt, this discovery will bring him great joy and begin to fill in the missing blanks in American history.
Must Read
European Space Agency Budget Increases By 10 Billion For The Next 3 Years
Artemis 1 Finally Launches: What It Means For Space Travel And Exploration
Clam Species Presumed Extinct For 40,000 Years Has Been Found Alive