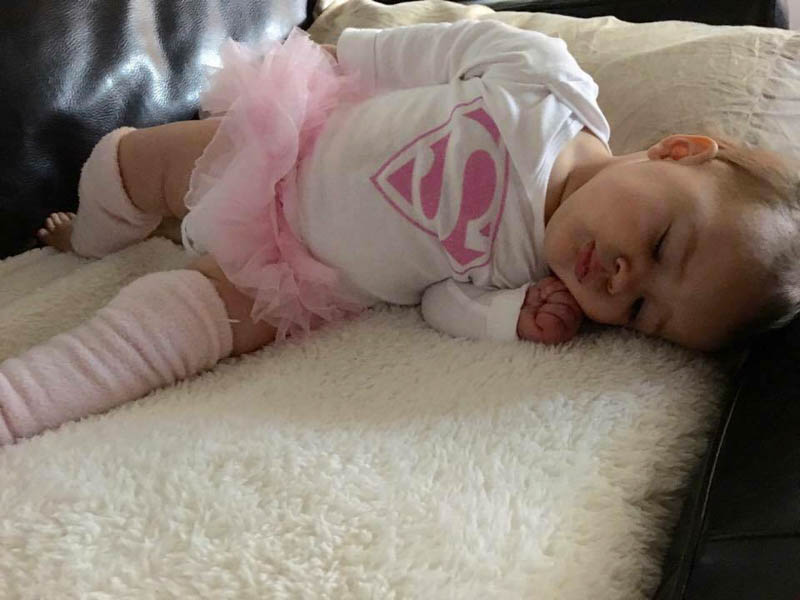 A Blessing To All

Joey and Kirsten Masciantonio were elated to welcome their baby girl, Gianna into the world. But this joy was quickly stripped from them as Gianna was diagnosed with a dire condition at only 4-weeks-old. Joey knew there was only one hope for his baby girl. She needed to be taken to the pope. But this desire in itself was riddled with complications. However, Joey knew he had to try and thankfully, he did.

The Masciantonios were a happy, devoutly Catholic family. The couple was thrilled when they found out Kirsten was pregnant. They had been trying for a child for a while. And so, the news was incredible, to say the least. When she was born, baby Gianna was the picture of beauty to her parents. They could not believe their blessings as they held the tiny miracle in their arms. But little did they know, this happiness would soon be short lived.

The first four weeks the couple spent with Gianna were sheer bliss. They could not believe how perfect she was. She seemed to be a blessing baby as she hardly fussed. At four weeks, the couple took Gianna back to the hospital for her visit. But on this visit, their lives would change dramatically. And it all began with the doctor asking them if they were aware of any hereditary illnesses within either family.

The Masciantonios never realized that something was peculiar about their baby. To the naked eye, Gianna looked to be the vision of health. But shortly after birth, doctors took a look at the infant. And they did not like what they saw at all. The family’s doctor’s heart sank. He had no idea how to tell the new parents what he had just discovered. But, he knew that he had to do so, and quickly.

Doctors informed the Masciantonios that Gianna had Juvenile Xanthogranula (JXG). This is a skin disorder which occurs in children under one. The child will grow tumors around their head and neck. But Gianna was a rare case. Her tumor had developed on her brain stem. Gianna’s central nervous system was beginning to be affected by the tumor as well. And the doctors advised the couple to begin to make arrangements for Gianna’s funeral.

Amazingly, baby Gianna made it through her first 15-months of life. The baby had undergone numerous chemotherapy treatments in order to shrink the tumor. And it appeared to be working! But only for so long. The doctors could not give any solid proof that Gianna would survive. But one day, Joey saw something that made him flip. The pope was coming to America! Joey knew what he had to do.

Will They Even Make It

Upon hearing Pope Francis would be visiting Philadelphia, the Masciantonios were elated. This was within driving distance of their home. But doubt quickly settled in. They were unsure of whether they would be able to present Gianna to His Holiness. The Catholic community would surely be out in full force that day. But then, the couple received a phone call of reassurance. The phone call that would change their child’s life forever.

Connections In The Right Places

The Masiciantonios had a friend in high places. Donny Asper was a close friend of the family’s. he was also an FBI agent put on pope security detail for his Philly trip. Donny knew of the plight of Gianna. As such, he gave the Masciantonios a call one afternoon and encouraged them to attend the procession. However, even with his assurance, Joey had reservations he was not sharing with his wife.

Joey wasn’t sharing everything with his wife. Deep down, he was riddled with suspicion surrounding the day. He did not know if taking his ill daughter into the crowded, hot streets of Philadelphia was the wisest choice. It was far to travel with their terminally ill child. But when he expressed his concerns to the medical staff, they convinced him otherwise. As such, the Masciantonios packed up and shipped off to Philly.

Remarkably, the couple made their way to Philly in record time. A trip on highly congested roads that would normally take them an hour at best took them only thirty minutes! But the blessings continued to flow. As they arrived, the couple found a prime parking spot. Something that is unheard of in busy cities. But the pair were even more surprised by the incredible spot they landed along the parade procession. They were front and center. And then, the most incredible thing occurred.

Head of security for the day, Domenico Gianni, was scoping the crowd at the right time. As he scanned the perimeter, he noticed the little girl hoisted into the air. He stopped the proceeding and approached the parents. Domenico took Gianna in his arms and gently took her to the pope. He raised to baby to the pontiff. The pope tenderly kissed the baby’s forehead, and she was returned to her parents. Then the miracles began to flow.

Days after encountering Pope Francis, the family made their way to another of Gianna’s chemo sessions. Post being kissed by the pope, Gianna received two further treatments. The little trouper seemed to be hanging in there. Then it was time for her MRI. The scans were run on the infant’s brain to see how her tumor had developed. But what doctors saw defied any logical explanation they could fathom.

Medical Anomaly In The Making

Upon reviewing her MRI results, doctors were utterly baffled by what they saw. Gianna’s tumor had almost disappeared completely! It was nothing more than a haze on the MRI results. The medical team could not understand what they were seeing. It was as though they had scanned a completely different baby. And when they shared the news with Kirsten and Joey, the couple were amazed. But there was even better news to follow.

The doctors then shared Gianna’s prognosis with the Mascciantonios. And they could not believe what they were hearing. Initially, when diagnosed, they were told their baby girl had only a few days to live. Weeks at best. And now, the doctors said Gianna would live on to lead a healthy, normal life! The pair could not believe what they were hearing. And they had only one thing to say when asked what they thought of her recovery.

The couple can’t explain how their child was healed. The only thing they attribute her recovery to is her encounter with Pope Francis. One little girl who had been diagnosed as terminally ill left doctors amazed. And the only thing that had happened was she had received a kiss from His Holiness. The couple is even firmer believers now than before. And Gianna is a true, walking miracle.
Must Read
Human Geneticists Finally Apologize For Horrific Past Experiments On Humans
The World Is Now 90 Seconds To Midnight
New Study Suggests Teacher Evaluations May Perpetuate Academia's Gender Biases