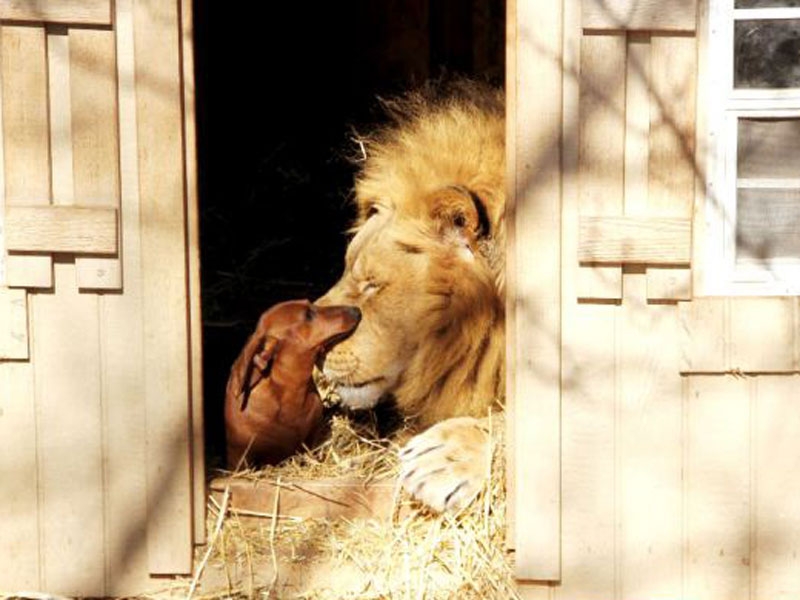 Everybody held their breath as they watched, mesmerized. It was an eerie feeling as the park went completely silent. He held tightly onto the leash, waiting to see what would happen but ready for a quick reaction if things went south. Then the two pairs of eyes met and spent a few seconds sizing each other up. Finally, one of them made the first move. And what happened next was something no one could have predicted.

Not Your Average Cats

Only a few months before, John Reinke had no idea he’d find himself in that situation. He had just welcomed to feline cubs to his house – but these weren’t your typical house cats. It was a tiger cub named Tony and a lion cub named Bonedigger. You see, John takes care of rescued young wild cats at his home in Wynnewood, Oklahoma. Previously he had also hand-reared two tiger cubs called Tippy and Orlando. But this new pair was something special.

John hand-fed Tony and Bonedigger formula and raw meat, groomed them, and played with them. The two cubs, despite being different species, soon became like brothers. They loved frolicking around and play-fighting with each other and also with John. Tony was the more playful of the two and sometimes got a little too rough with John. But Bonedigger was always there to keep his feline buddy in check, snarling at him so he wouldn’t hurt John. And there was a reason for that.

Not Fit For The Wild

Bonedigger was brought to John because he couldn’t survive in the wild – he was born with a metabolic bone disease. This rare condition meant his bones would grow a little deformed and more brittle than those of a normal lion. Bonedigger would have to live his entire life in captivity and away from bigger, stronger animals that could hurt him. Thankfully, he had found someone who understood what it was like to live with a disability. And that someone was John.

Long before he started taking care of big cats, John had always lived on the wild side. One day in 1994, he went bungee jumping. The trap door malfunctioned and he fell 55 feet to the ground. He survived but broke both his feet, his hip, and his back. The doctors told him he would never walk again, but he’s a very stubborn man. Through physical therapy, he regained the use of his legs. But he kept suffering from infections and soon he received some life-changing news.

Both of John’s legs were amputated at the knee. But this only made his resolve grow stronger. He started taking care of young wild cats, and soon it became his passion. He developed a particularly strong bond with Bonedigger, probably because they both understood what it felt like to be physically different from others. But these were big cats, after all, and he couldn’t keep them in his house forever. Luckily, there was a perfect place already waiting for them.

Aside from taking care of young cats in his home, John also worked as park manager at the Greater Wynnewood Exotic Animal Park. This would become Tony and Bonedigger’s new home, where they’d have big, grassy enclosures to roam and play. Tony was taken to meet the other tigers in the park, while Bonedigger got an enclosure all to himself. But, despite having a lot more room, he wasn’t happy.

Bonedigger missed his play pals Tony and John, and soon he became really lonely. He would pace around the enclosure and bite at the fence. But John knew he couldn’t put Bonedigger with other lions or tigers as he was likely to get hurt. That said, he didn’t want him to languish in his loneliness. And that’s when he got an unorthodox idea.

Aside from all the wild animals in enclosures, the park was also home to a pack of four dachshunds: Abby, Milo, Bullet, and Angel. They were considered the park mascots and roamed around freely. They were extremely friendly, not just with humans but with all the other animals in the park. Abby was the pack leader and the most fearless of the four. This gave John an idea.

John put Abby on a leash and went into Bonedigger’s enclosure while another keeper held onto the young lion. The two stared at each other for a few seconds, until Abby started jumping around, clearly wanting to play with Bonedigger. Suddenly, the lion pulled away from his keeper. It was a tense moment as neither men knew if he was about to attack Abby. But what happened next was completely unexpected.

Bonedigger actually moved away from Abby, and it seemed he was scared of her. Abby didn’t let up, though, and soon the young lion’s curiosity got the best of him and he slowly approached the wiener dog. Once he got closer, he started sniffing her as she wagged her tail. Excited, Abby started running around in the grass, and soon found Bonedigger’s stash of toys. The lion ran over to protect his things, then Abby licked him on the nose. That’s when John knew his plan had worked.

After the awkward initial meeting, Bonedigger decided he liked Abby after all. It was incredible to see how this tiny dog was so unafraid of a lion who, although still young, could seriously hurt her. John says it all comes down to her cluelessness. Apparently, dachshunds aren’t really aware of their size, so they aren’t daunted when they come up against bigger animals. And Bonedigger, who was craving a new playmate, found in Abby the perfect companion. And soon it would become a pride.

Bonedigger and Abby were moved into a bigger enclosure where Abby got her own bed alongside her new best friend. Soon, the other three dachshunds were introduced to Bonedigger, and they all got along swimmingly. They became part of his pride and he became part of their pack. They run around playing and chasing each other, and they’re never apart – except when John has to clean their enclosure.

Can’t Stand To Be Apart

Every once in a while, John has to enter the enclosure to trim down the grass and get rid of weeds. The dachshunds love to attack the weed-whacker, so John is forced to take them out. Bonedigger spends the whole time pacing around the fence, crying. “As soon as I’m done weeding, I let the weenie dogs back in and he counts his weenie dogs, makes sure they’re all there, and just loves all over them,” he says. But Abby’s definitely the one he loves the most.

“I think there’s a bigger bond between Abby and Bonedigger than the other three weenie dogs,” says John. “He even bites at the fleas like you see dogs do with each other. It’s just crazy what they do.” And he feels their relationship is a lesson for us all. “He’s a wild animal, but he can be tamed. The weenie dog is a tamed animal, but it can be wild. There’s a little bit of each animal in each one of them.”
Must Read
Genome Studies Manage To Find A New Branch Of Fungal Evolution
European Space Agency Budget Increases By 10 Billion For The Next 3 Years
Artemis 1 Finally Launches: What It Means For Space Travel And Exploration