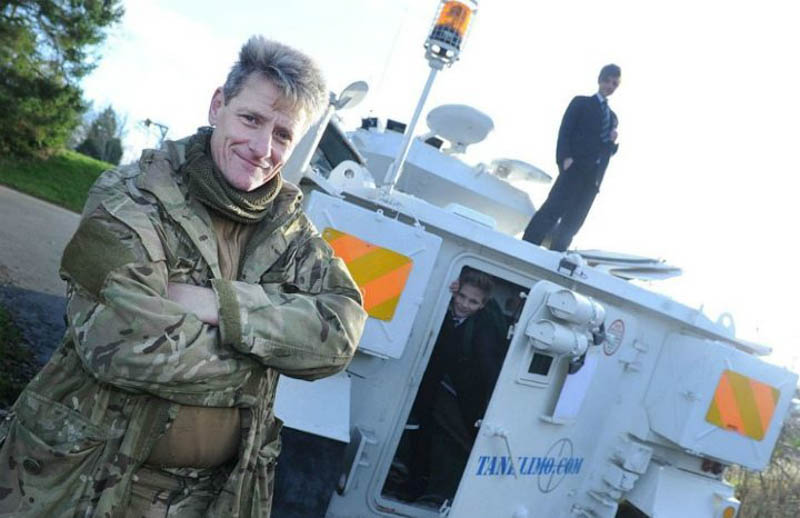 As Nick Mead reached into the old fuel canister, he had no idea what to expect. His hand briefly brushed against something smooth and cold. Alarmed, he yanked it out immediately. Who knows what lurked in the tank after what they had just found in the other canister. Nick had no idea what he had gotten himself into. All he wanted was the tank. He had never bargained on becoming an instant millionaire by doing so.

A Man Of Mystery

Nick Mead was an average English bloke. Residing in Northampton, England, he seemed like your ordinary guy. However, he did have one part to his character that made him stand out from the rest. Nick had a passion for tanks. So much so, that he began to collect old armored vehicles. But this quickly developed from a passion, into something far darker.

Nick’s passion quickly grew into an obsession. And he quickly began to acquire more and more collectible vehicles. But this came with a hefty price tag. Collecting tanks and other wartime vehicles were not the cheapest hobbies around. These collectibles quickly began to burn a hole in Nick’s pocket. Especially since once acquired, they did nothing more than stand around. But then, Nick had a crazy idea. But it was so crazy that it just might work.

Nick knew he needed to start making a profit off of his prized possessions. But war museums were so dated and boring. But then he had a stroke of genius. What if he turned it into a first-hand experience? Nick was thrilled with this idea. As such, Tanks A Lot was born and introduced to the public. Soon, members of the community were enjoying rides in veteran war vehicles and thrill seekers came from far and wide. But one day Nick saw something that would change his life forever.

One day, while browsing through e-Bay, Nick came across a rare find. He stumbled upon a listing for an old Soviet T-54. This was sure a collector’s item. And Nick knew he had to have it. Quickly, he entered into negotiations with the seller. But the man drove a hard bargain. He wasn’t merely looking for monetary compensation. When he learned of Nick’s profession, he insisted on doing a trade for the tank. And so, Nick had a tough choice ahead of him.

A Compromise Is Met

After much deliberation and sleepless nights, Nick agreed to the seller’s terms. As such, he bid farewell to two of his finest vehicles in exchange for the T-54. But Nick knew something the young seller did not. Tanks are often used to transport valuable goods and people during times of war. And the T-54 was a common vehicle used during the Iraq-Iran gulf war of the nineties. However, Nick did not expect to stumble upon the eerie find in one of the fuel canisters.

Nick and his team had a set routine when acquiring a new vehicle. They would check the tank from top to bottom, looking for faulty part or hidden gems. And it just so happened that the T-54 was filled with the latter. One day, his crew was taking apart the fuel canisters of the tank. However, one seemed to be out of service. When removed, Nick was astounded by the weight of the canister. But when he opened it up, he was not ready for what he found.

Reams and reams of old bullets fell from within the canister. Nick was astounded at the hidden arsenal. He also was cautious of it. Old bullets were incredibly sensitive pieces of war memorabilia. If treated incorrectly, they may go off, causing mass destruction. As such, Nick went straight to the authorities to declare his find. But now Nick knew something. He knew that the tank was used as a keepsake hideaway box.

There Must Be More

Nick knew there must be more hidden within the tank. As such, he and his staff went to town on searching every nook and cranny of the vehicle. He couldn’t afford for old arsenal to be left within the tank. If a civilian became maimed by something he had missed inside the vehicle, he would be held accountable. And so, the great search began. But Nick was not prepared for what was found next.

Not Ready For This

Finding the next bit of hidden treasure wasn’t as hard as Nick thought. The team came across another faulty fuel canister. But this was different from the one before. It took two staff members to pry the canister off of its holding bracket with crowbars. This canister seemed to weight a ton. Quickly, Nick bore a hole in the bottom of the fuel tank to see if he could reach inside. He thought he’d find guns to accompany the hidden bullets he had found earlier. But this tank held a far richer keep.

As Nick slid his hand across the smooth surface, he got an instant thrill. Quickly, he latched onto the bar and pulled it out of the canister. This discovery sent him reeling. In his hand, Nick held a gleaming gold bullion. He absolutely could not believe his luck! Nick marveled at the bar and showed it to the team. This inspired them to hoist the canister out to see what else was hidden within. And this is when things began to heat up.

One of Nick’s engineers began to reach into the fuel tank. And it seemed every time his hand came out, it was holding another bullion. In total, the tank contained five gold bars! This was estimated to cost a whopping $2.4 million. Nick was baffled by the monumental find. But now, he was plagued by his conscience. Whatever would he do with this treasure?

Everything in Nick’s being wanted to hold on to the bars. But he knew this was not morally sound. Nor safe. If he kept ownership of the bars, he would put his business and family at great risk. He would be a target for crime should anyone learn of his bars. As such, Nick decided to call the local police force. But still, he needed to know what would become of the bars.

Nick was given a receipt by the police who then took the bars into police custody. The authorities would try and find the rightful owners of the goods. But what would happen should no one claim them? Nick was not sure. But still, for safe keeping, he kept the receipt of the bars in a bank vault. Authorities came back with a baffling theory on who the previous owners may be.

What Ever Will Happen?

The police shared news which Nick sure was not ready for. They speculated that the owner of the gold may have been Saddam Hussein himself! This type of tank was favored by the war veteran during the Iraq-Iran war of 1990. Plus, his troops were known to pillage the rich Persian Gulf. However, to this day no solid claims have been made and the ownership of the bars still lies in question.
Must Read
Three Indigenous Tribes In The United States Will Get $75 Million For Relocation Due To Climate Change
A New Supercomputer Simulation Animates An Incredibly Accurate Look At Universal Evolution
Genome Studies Manage To Find A New Branch Of Fungal Evolution