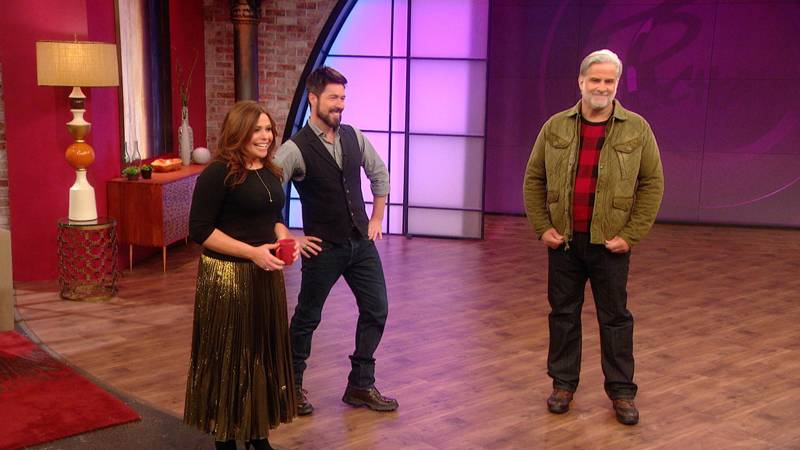 Not The Man She Knew

Karen couldn’t believe her eyes. The man she had known and had been married to wasn’t the same person anymore. That man was gone. She held her hands to her face that was in an “O” of surprise. The hot studio lights were beating down on her relentlessly, and there were so many people around her. She suddenly felt like she would faint from the sheer shock of it all.

Ian Cook was an unassuming man from Connecticut, and it showed. He worked in utilities and felt no need to keep up appearances. In his line of work, he didn’t feel any need to make an impression on the people around him. Unbeknown to him, he was nevertheless a startling sight. He had grown a little paunchy and hadn’t bothered to shave his face or cut his hair in years.

It was a normal day for Ian, and he was quietly going about his business. Out of the blue, his phone rang. He was surprised to discover that it was his ex-wife on the other end of the line, and she had an unsettling request. She asked him to do something that he would never have considered before. That is, until now.

He couldn’t believe what his ex-wife was asking of him. “How could she?” He wondered angrily, And how dare she? She who had walked out of his life years ago now wanted him to do something unthinkable, and she had meddled in his life to get what she wanted. He felt betrayed and trapped. Little did he know he didn’t have a say in the matter.

After arguing with Karen, his ex-wife, on the phone Ian felt a small kernel of outrage bubbling up inside him. She had tried to use soothing words, but he was having none of it. All the sugar coating in the world couldn’t mask her patronizing attitude, and he knew she was just trying to get her way yet again. Ian was a mild-mannered man, but he felt something snap inside him.

He Wouldn’t Go Down Without A Fight

Ian’s ex-wife wanted him to change his appearance. He couldn’t believe she could be so controlling. It was his body, after all, and he could dress and have his hair any way he wanted, thank you very much. So he flatly told her he wouldn’t do it. She had never had a problem with his hair when they married. He was annoyed beyond belief. Until his teenage sons came home.

Benjamin and Cameron, Ian’s 16-year-old twin sons, were at an age where they were very concerned about appearing “cool”. They often looked silently at him, and he could feel their judging eyes move from his worn jeans to his unshaven face and the shock of silver hair he wore loose about his shoulders. They even jokingly gave him a nickname: Gandalf the Grey.

Ian was at a crossroads in his life, and he knew it. His teenage sons had become too embarrassed to bring girls home to meet him. While he didn’t think appearances were important, he knew that they were at a tender age and his grungy look would only ostracize them and open them up to ridicule at school. It was a hard decision, but one he had to make.

Ian called Karen up and admitted defeat. And while the whole situation felt demeaning, he knew it was the right way to show his sons that he truly cared about how they saw him. Maybe he had let his hair get a little out of hand, he thought to himself. But he wasn’t ready for how people would react when he walked out on stage.

Karen had, out of sheer desperation, signed Ian up for a “manover”. She had begged him to cut his hair for long enough and now she had pulled out the big guns. Ian, herself, and their sons were waiting in the audience to see Ian’s life-changing transformation. But the man who strode onto the stage was not her husband.

Ian walked into the blinding light, and there was a collective exhalation from the crowd. Rachel Ray, the star of the show, made a squeal of delight. Ian stood in front of the audience and felt like a weight had been lifted off him. Technically, it had. He was now a dashing silver fox, with his hair shorn to just below his earlobes and slicked back. His beard had been trimmed, too, and it had taken years off his face.

Karen couldn’t believe the vast improvement that a haircut could make for her husband. He was rather handsome, she thought wistfully. Rachel Ray prodded her and asked if she had any designs on him now that he looked so gorgeous. Ian stopped that line of questioning with an adamant “Noooooo.” His sons were looking at him in disbelief, and he knew he had done the right thing.

Style expert Kyan Douglas stood back to admire his handiwork. His careful scissoring and clothes selection had worked wonders, and the man who stood before him was no longer lost in that unkempt mane of shaggy hair. He even held himself differently, as if he really had become a different person. Ian’s strong jawline was accentuated by his shorter beard, and his eyes sparkled with pride.

Aside from the obvious haircut, Kyan also picked out clothes for Ian to wear that were naturally flattering, “This is some sort of military green, quilted and cropped-cut jacket,” he said. “If you go for a cropped waist and solid jacket, you’re creating structure.” Kyan shares some expert advice for men: “Basically, he’s a big and tall guy. The secret is…if you are of big or tall size…is to incorporate some structure into your look”.

Ian’s life-changing transformation has left millions of people stunned, and he is extremely happy, too. Rachel Ray pointedly asked: “Ian, my first question to you is you comfortable?” to which Ian replied by saying, “Yeah, I’m very pleased with everything.” Hopefully he will have more luck with the ladies now, especially as getting back together with Karen is off the table.
Must Read
European Space Agency Budget Increases By 10 Billion For The Next 3 Years
Artemis 1 Finally Launches: What It Means For Space Travel And Exploration
Clam Species Presumed Extinct For 40,000 Years Has Been Found Alive