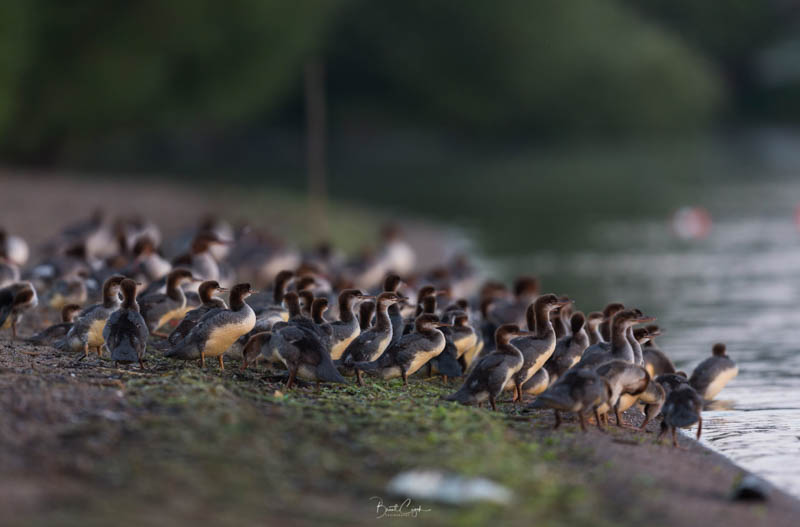 One Heck Of A Matriach

One mama duck took the cake for mom of the year. Nature photographer, Brent Cizek, stumbled across a phenomenal sighting on one outing. One duck at a local pond was making her way across the lake. But what was strange was what was behind her. This mother duck had a mass following of ducklings in tow! Brent could not believe his luck. Immediately, he took out his camera and snapped away. But when he looked at his pictures, he was heavily disappointed.

Brent took a look at his camera roll and saw only one image had turned out semi decent. He was dismayed at this. But in all fairness, he had only taken one lens and camera that day as he wasn’t expecting to shoot much. Furthermore, his eight-foot plastic boat was experiencing heavy chop from the water. But when he counted the number of ducklings following the mama duck, he totally flipped.

In this image, Brent managed to do a headcount of roughly fifty ducklings. The sheer size of this brood blew his mind. Brent knew what he had to do. He had to get back out on the water with decent equipment. He was determined to track this phenomenal mother duck down and capture her properly. So, a week later Brent packed up and headed to the lake once more. but this time, mama duck exceeded all his expectations.

Luckily for Brent, the conditions on his second visit were idyllic. But now to find the duck! Brent boated around for a few minutes. And then, as luck would have it, he spotted the incredible brood once more. Brent high tailed it to the ducks. But did his eyes deceive him? There seemed to be a substantial amount more ducklings that the last visit. Quickly, Brent began to snap once more. But when he did a head count this time, he was blown away.

When Brent counted this time, he could not believe his eyes. It appeared that the mother duck now had a brood of seventy-six strong! Brent was gobsmacked. But soon, the impressiveness of the photo gave way to another emotion. Curiosity overwhelmed Brent. He could not believe how one duck could be mother to so many ducklings. He had to get to the bottom of this phenomenon. So, he did the only thing he could think of.

Brent began to research furiously. He sent his photo through to Yale ornithologist, Richard Prum. On reviewal however, Richard was of little help. He suggested that this was “an extraordinary sighting”. But went on to mention how one mother could not physically sit on so many eggs at one time. However, Brent had one more card up his sleeve. Brent was looking for the man he knew could give him answers.

Brent sought out David Rave. David is a wildlife manager. He is responsible for the Bemidji region for the Minnesota Department of Natural Resources. David shared something fascinating with Brent, answering all his questions. The duck in question was a Common Merganser. These ducks, like some other birds, create creches for their young. All mothers leave one matriarch duck in charge of their babies. But the reason for this is even more fascinating.

The Common Merganser duck choose their matriarch wisely. She must be an older duck with experience for rearing young. This gives all babies a better chance at survival. Whilst the tots are at creche with grandma matriarch, the mom ducks get some much-needed time. During this time, they will generally go off to shed. Something they would not be able to do if responsible for offspring. This knowledge inspired Brent to do something.

Mom Of The Year

Brent decided to release his photo series on his personal website. He, and many other around the area, have dubbed the matriarch duck as ‘mom of the year’. In order to rear so many offspring, she must be! Brent’s photos received a massive response on social media (almost as big as the duckling brood). People loved this inspiring mama duck. But this mother duck did one more thing.

“It kind of compels you just to look and wonder: How?” Brent shares. People still speculate over this incredible bird now. Often Lake Bemidji is filled with eager observers, keen to spot the ducks. Have they grown in size since Brent’s last series? Nobody knows. But one thing’s for sure. All those ducklings are in very good hands. They must be for that mama duck to have accrued so many!
Must Read
Genome Studies Manage To Find A New Branch Of Fungal Evolution
European Space Agency Budget Increases By 10 Billion For The Next 3 Years
Artemis 1 Finally Launches: What It Means For Space Travel And Exploration