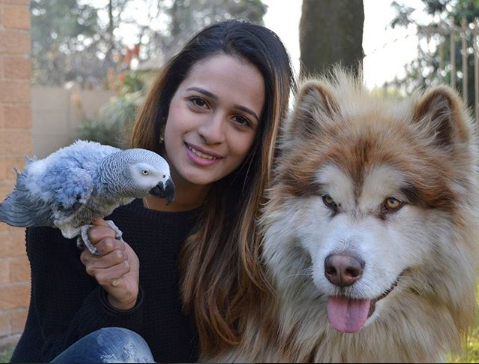 Yumna thought she knew everything there was to know about motherhood. She read the books, watched tutorials and even attended classes. But there was one aspect that no one could help her with.

Yumna thought she knew what she was getting herself into. She had done the research, read the reviews, searched the internet for a suitable breed. She made all the necessary purchases—dog bed, collar, lead, shampoo, engraved tag. She thought she was ready for the commitment. But as he began to outgrow his bed and collar and lead, she began to worry. Then, the unimaginable happened.

When Yumna Saloojee managed to get herself into a stable job and a comfortable financial state, there was one thing on her mind. Some had a long mental shopping list—handbags, shoes, jewels, tech, but this South African woman didn’t care for any material possessions. Ever since she was a girl, Yumna dreamed of having a companion. Her parents thought the years would bring her sense. A dog was a lifetime commitment. But the opposite happened.

Yumna wasn’t fussy when it came to dogs. As long as it had four fluffy legs, she was happy. She was the person who stopped to rub every animal she passed. When the time came for her to adopt, she had to choose a breed. Most consider the size of the animal before adoption. Chihuahua didn’t need much food or space. Irish wolfhounds required hours of exercise and a large amount of food. How could she just choose one?

Yumna scoured the internet for weeks on end. If she was doing this, she was determined to find the dog of her dreams. She searched hashtags and scrolled through hundreds of pictures on Instagram—beagles, huskies, pugs, boxers, shih tzus, dalmations, terriers, collies. The more she searched, the harder it was to choose. Then, her pupils widened.

Yumna jumped with delight at the picture of an Alaskan malamute. The tiny puppy on her screen was the cutest creature she had ever seen. She immediately googled the breed, bookmarking pages and sharing information pages with friends and family. Their wolf-like facial markings and long coats intrigued here. Where were these beasts from?

Alaskan malamutes are the oldest Arctic sled dogs. Thousands of years ago, the dogs were used by Eskimos travelling from Siberia to Alaska. They were also used as protection against polar bears, and to hunt and catch seals. Once upon a time, these canines were the most valuable companions in the Arctic. But Yumna had never even heard of them before. Where could she find one?

It took many calls and emails but Yumna eventually tracked down a breeder whose female just had pups. Yumna ran out the door so quickly, she only realised her shoes were untied when she arrived. The pups were only two weeks old. They were little balls of fur, snuggled against their mother but the runt was struggling to climb over his brothers and sisters. She reached forward and lifted him into her arms. When he looked up at her, her heart melted. This was her dog. But he was so weak and tiny. Would he make it?

“I fell in love the second I held him,” Yumna shared. Unfortunately, Yumna had to say goodbye to the love of her life, who needed more time with his mother. Her heart ached more and more with every passing week. She showed a picture of him to every dog owner she met in the park. “He’s called Tydus. It means great, giant warrior,” she couldn’t contain her excitement. When the big day finally came to pick him up, she was in for a surprise.

Yumna knew Alaskan malamutes were big dogs. When she brought Tydus home for the first time, he had already grown six times in size since the first time they met. He quickly got acquainted with his new home. Yumna pulled out all the stops with a personalised bowel, a soft bed, and a basket of toys to keep him occupied. Yumna thought she was ready for parenthood but she was in for a massive surprise.

Alaskan malamutes are famous for their friendly personality and intelligence. Tydus had a big personality—forever playful and cheeky. He was hard work, but he was worth it. As the months went by, Tydus continued to grow, surpassing every dog in their area. Male malamutes usually weight 85 lbs and stand at 25 inches. “Giant” malamutes can sometimes reach 140lbs. Still a puppy, Tydus weighed an impressive 120lbs. Yumna had her hands full with this lively dog.

Yumna had to train Tydus; fast. More of a bear than a dog, the friendly giant was too friendly with strangers, often jumping up to greet them before knocking them to the ground. Tydus was never shy. He loved attention but Yumna worried he would accidentally hurt a child while out for a walk. “His fluffiness is the first thing that catches attention, then his size,” she explained. His frame and energy levels continued to grow. But Tydus was a very smart, young boy, and he loved his treats.

Although Yumna managed to train Tydus how to behave in public, he’s still her big baby. His hugs knock her to the ground and he jumps on her lap just as he did as a puppy. Unaware of his size or weight, Tydus can’t help but show his affection. He still plays, runs, and jumps, just as he did the first time he arrived home for Yumna. Now 4-years-old, he still hasn’t grown out of his playful ways.

“I don’t think he will get any bigger now, and that’s okay. I might get crushed if he does!” Yumna has managed to train this giant warrior. But in the comfort of their own home, he still remains the playful puppy she fell in love with all those years ago. Yumna always knew her boy was special. She decided to share him with the world. And when it was time to welcome a new member to the family, he couldn’t have been more excited.

Yumna and Tydus adopted Trez, the Congo Afraican grey parrot. Yumna decided to share their small family portrait online and became an overnight sensation. The “Trez and Tydus” Instagram account now has over 150,000 followers, all infatuated by their unique little family. Yumna always knew Tydus was special, so she was happy to share him with the world. “Wherever we go, even just for a walk around the block, we get stopped and asked about his size, age and most often, ‘What breed is he?’ I guess it’s not often that you see a lion-dog walking the street.”

“If his looks didn’t get your attention, his personality definitely will,” Yumna explained. “He has an amazing soul that earns everyone’s affection. He’s a little charmer … or giant charmer.” Their small family has become an internet sensation, sending hearts all over the world into overdrive. And Tydus has no problem sharing the spotlight with his best-friend, Trez. These two are definitely destined for fame!
Must Read
Genome Studies Manage To Find A New Branch Of Fungal Evolution
European Space Agency Budget Increases By 10 Billion For The Next 3 Years
Artemis 1 Finally Launches: What It Means For Space Travel And Exploration