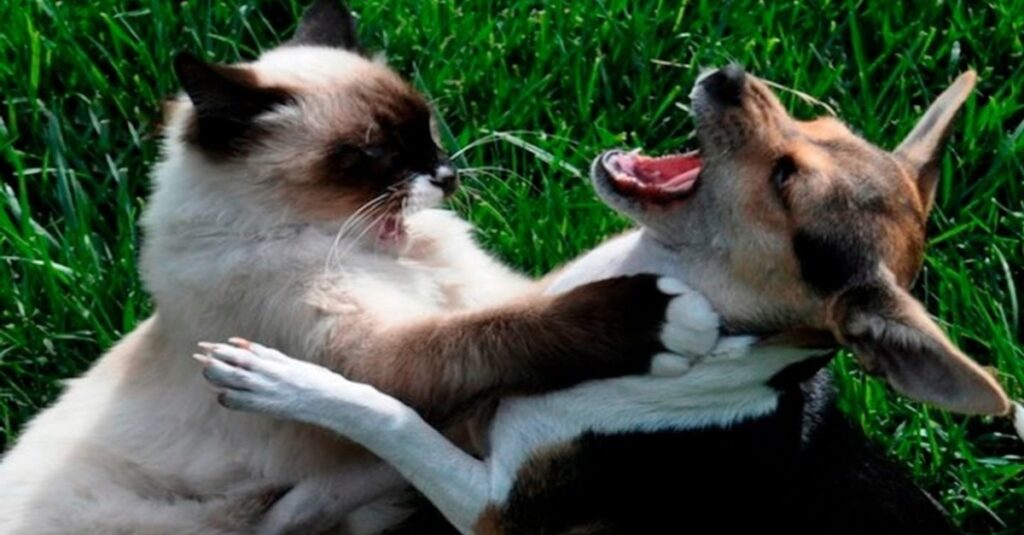 Even when animals are domesticated that doesn’t always mean that they get along with everybody. Especially when these animals have to interact with others. Take a look at some adopted pets that aren’t so happy about living together. Just as this little pooch was sitting down, enjoying his own company, this cat calmly walked over to him and clapped him on the face for no reason. The dog simply stood still. They had a brief stare off before the cat turned and continued on its way. It would be nice to see dogs fight back sometimes…

Come At Me Bro! 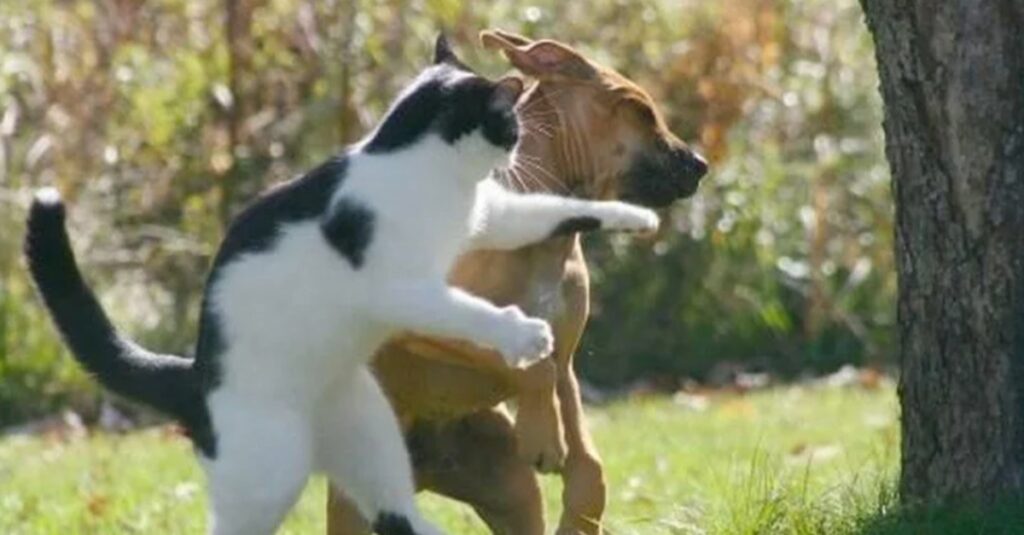 This is another photo that proves our point. This little puppy ran up to this cat ready to say hi to him. But the cat completely misunderstood him and gave him a solid hit to the jaw. His stance was saying “Want more of this? Come at me, bro!”. But of course, cats don’t talk and well, this confrontation ended as abruptly as it began. Unlike this next photo that simmered in tension.

You May Not Enter 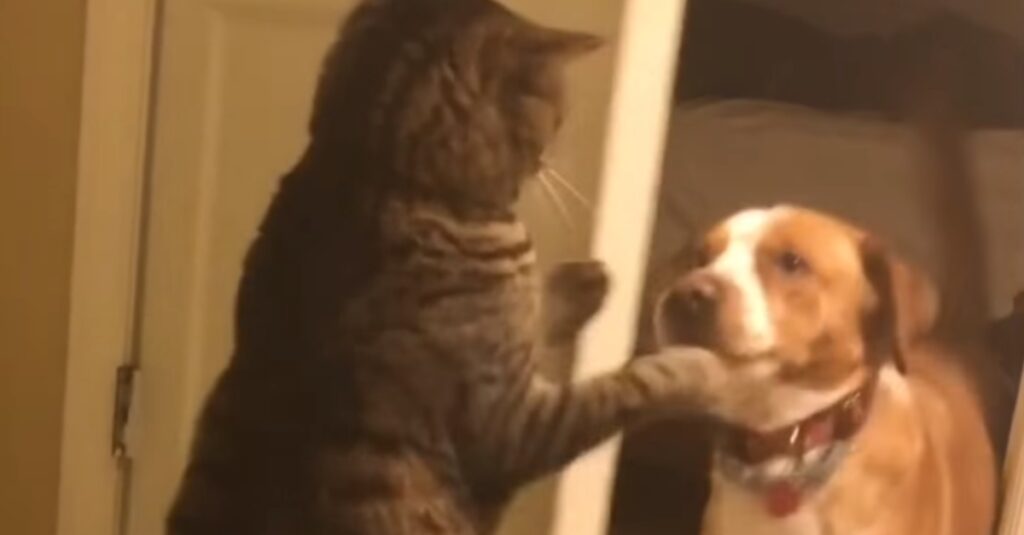 This cat understands himself as the master of the house. His owner laughed as she wouldn’t let his poor dog brother pass. The dog didn’t know how to deal with the situation as it got more tense with every passing second. But the cat wasn’t backing down… 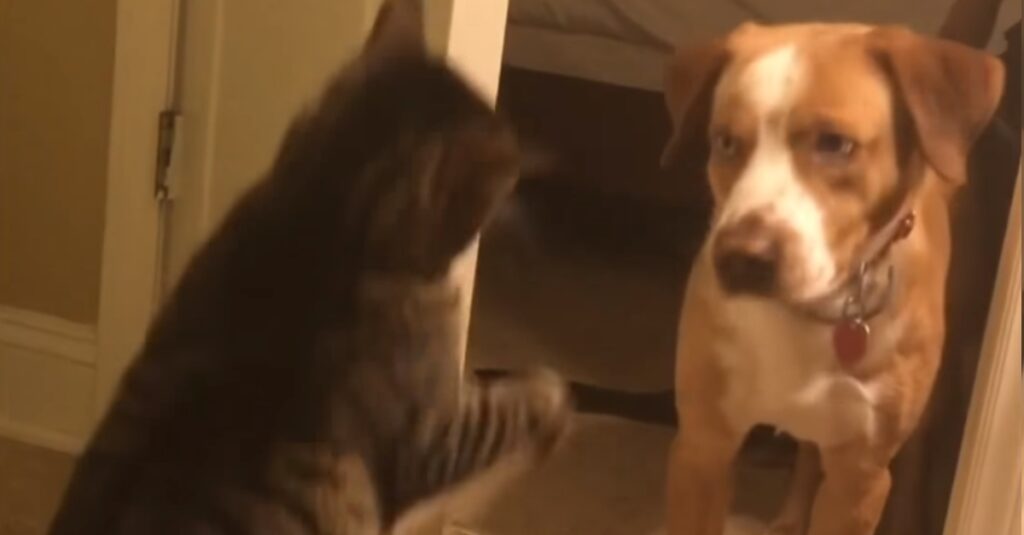 You can see the dog plotting his revenge for this as he stares at the cat with searching eyes! The cat held its position until it eventually got bored and walked away nonchalantly. The owner laughed as the dog seemed to look relieved to have made it past this ordeal! 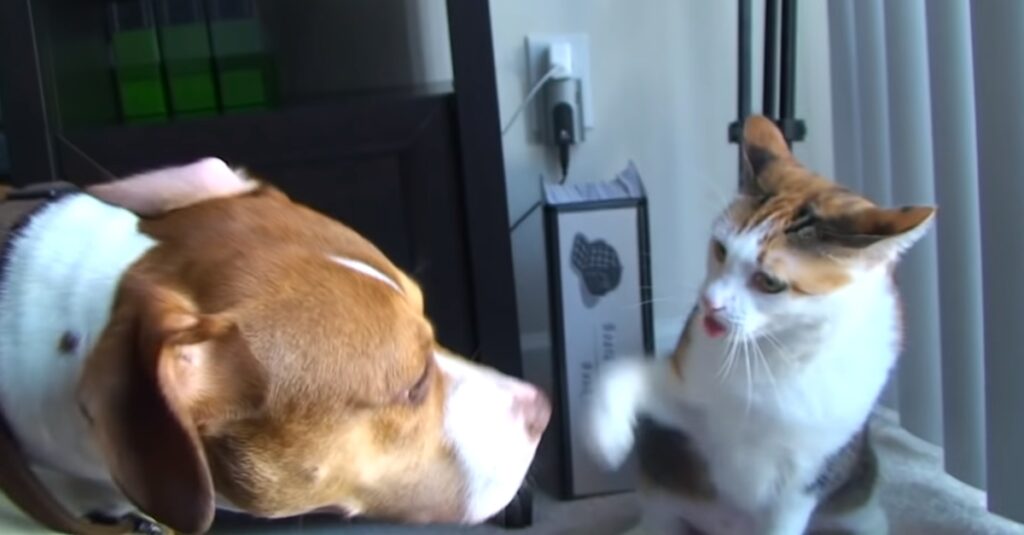 This cat doesn’t like to be surprised by his sister. She snuck upon him while he was napping and turned around like a ninja before delivering a light slap. His sister was so confused at his reaction that she decided the next best thing to do would be to just act normal… She froze and carefully averted her eyes away from her angry brother. All she had to do was act normal and the situation would completely dissipate! The owner filmed the encounter with a muffled laugh as her dog’s plan began to work like a charm when the cat calmed down. 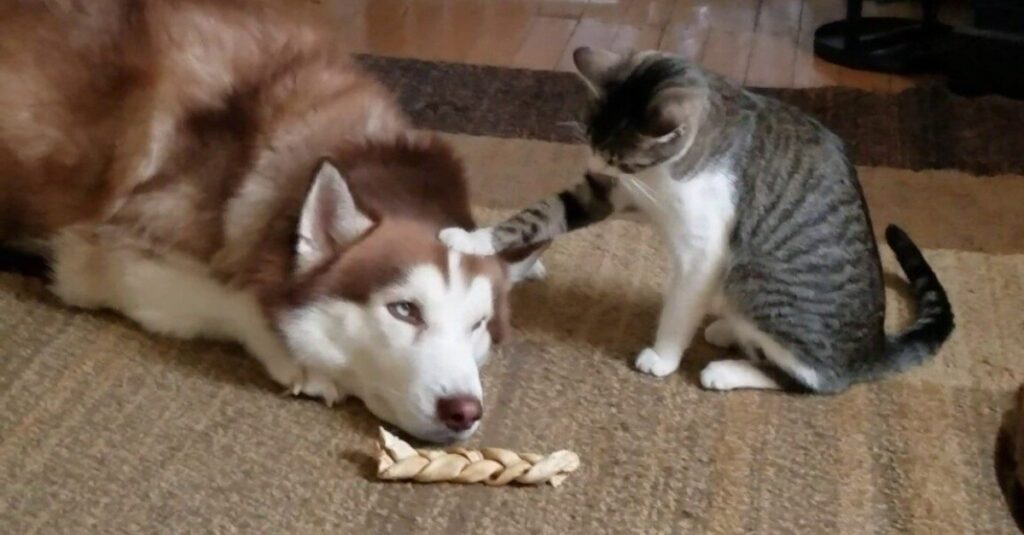 This cat shows no mercy! The best part about having siblings, after all, is the confrontations that build your character! However, we’re not sure if this big doggo knows it’s four times the size of its big sister. Her submission to this bossy cat is hilarious! 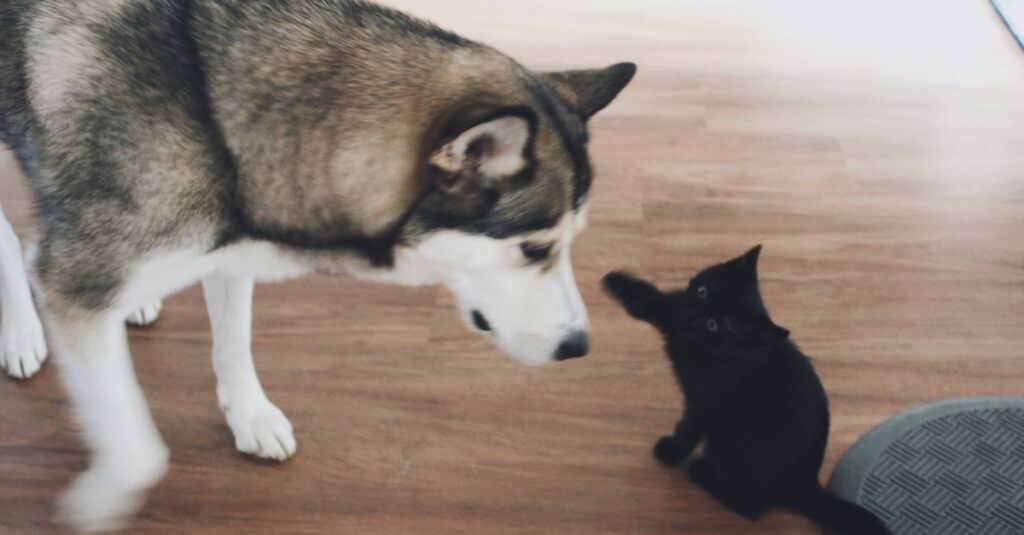 No matter how big you are, if your opponent is fiercer and meaner than you, you might run to mom for help and that’s exactly what this pooch did! This is an 80-pound dog terrified of his new little brother. But this next little pupper has no fear!

I’ve Had Enough Of This Child 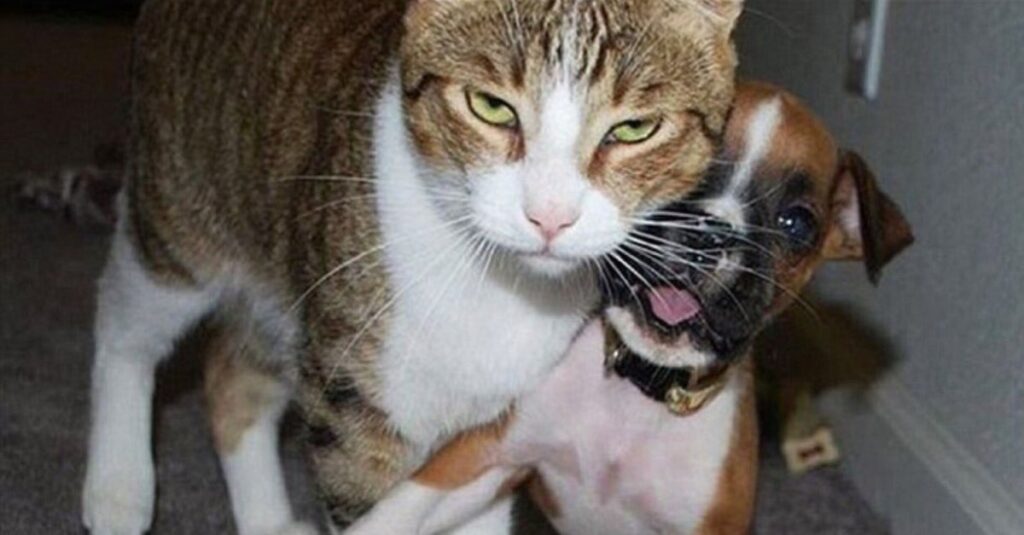 Some dogs seemed to be born absolutely fearless, just like this little bundle of joy. This puppy was so excited to have an older sister that she couldn’t contain her excitement. Her day is filled with trying to play with her sister cat, yet it’s not too hard to guess who isn’t very happy about that…

I’m Gonna Get You

It’s not uncommon that siblings fight, but sometimes it hits breaking point. That what’s happened here when a play fight got out of control! Their owner posted this photo with the caption “They fight like this all the time. Later they’ll be curled up beside each other. It’s a war or snuggles type deal”. But this one is a love or hate type thing… 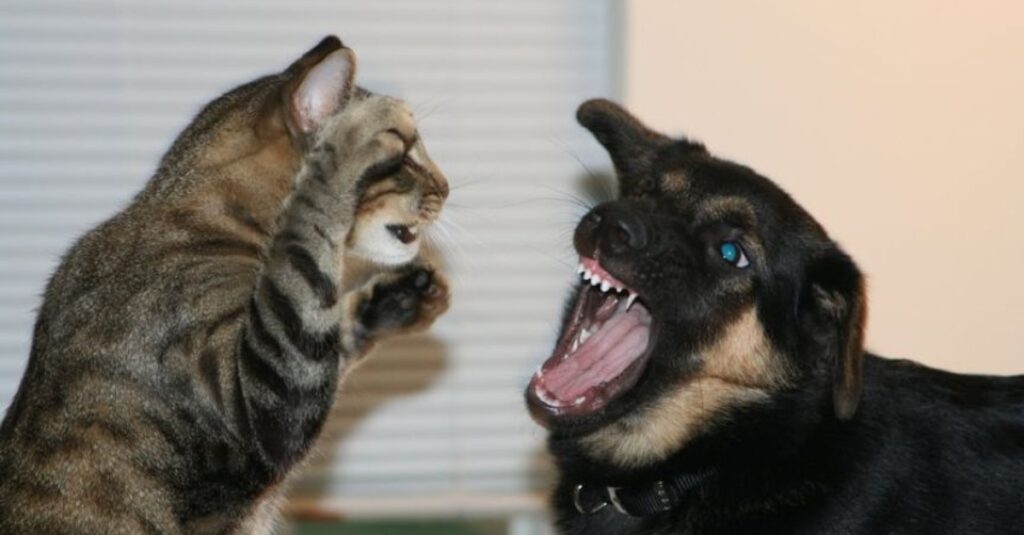 When your sibling is being sweet and loving with you, it’ll always raise one question in your mind, ‘What do you want?’. This dog received a surprise attack when his brother suddenly pounced on him after sweetly walking up to him. Is it just us or do cats seem to be the instigators so far?

She Stole My Bed… Nothing is as annoying as when your sibling helps themselves to your things without even asking! But what if they helped themselves to your bed? This is the face of a doggo where his bed was stolen in broad daylight by his sibling and he knew he needed moms help! What patience, but perhaps not as much patience as this cat… Look at all the open space on that couch. Now, look at where this dog decided to plop his big behind. Besides grabbing the armrest, his sibling didn’t seem to mind the extra weight on top of him much. We wonder how long it took for the cat to decide that he actually wasn’t okay with being a resting place for his siblings behind! But while we’re on the topic. It’s not often you find an irresistibly comfortable place to rest. So when you do, it’s best to hold on tight. Especially when that place is on the top of your sibling’s head! This is a hilarious photo of a very patient dog and his little mischievous sister! Although cats have a bad reputation for starting on their dog siblings, dogs are no angels. And sometimes they might even deserve a little reminder to leave the cat alone. This dog kept playing chase with her sister until her mom had to come and tell her to stop. The poor little cat! Saying that however, it’s also true that it’s no ones fault and their differences simply come down to a personality trait. Cats are mostly laid back, relaxed and observant. Dogs on the other had are excitable, playful and love to interact with things. This make dogs more often than not, one annoying sibling for cats to put up with! Going home after been fitted with a cone collar at his worst place on earth is already stressful enough for a dog. But coming home to a cat that doesn’t care makes it a losing situation! There’s simply no time to unwind and relax when your share your home with a cat who will remind you of their superiority any chance they get! That’s why this next photo is hilarious! It’s rare for dogs to establish their own superiority against a cat who seems to reign above them all. They’re just not as silly as dogs. Yet, when you get a chance to subtly remind cats of how equality works, you should take it. This is exactly what this funny dog did. But don’t worry it wasn’t personal, or so we think!
Must Read
Genome Studies Manage To Find A New Branch Of Fungal Evolution
European Space Agency Budget Increases By 10 Billion For The Next 3 Years
Artemis 1 Finally Launches: What It Means For Space Travel And Exploration