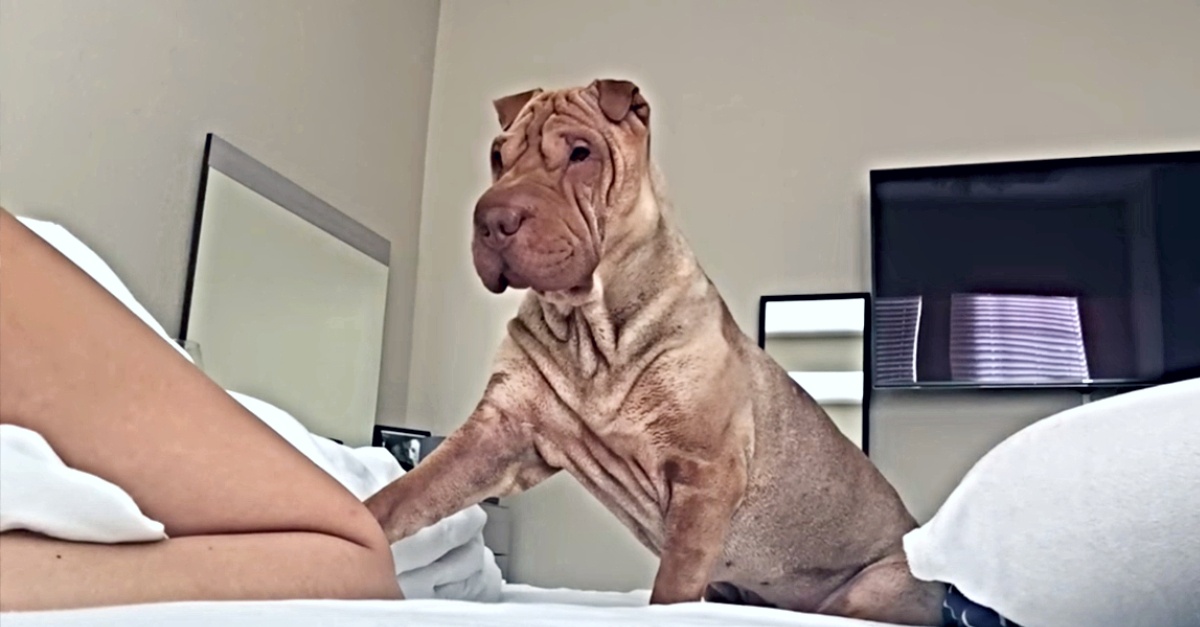 Giving a shelter dog a loving home can be one of the most rewarding things you’ll ever do in your life.

But, sometimes, an adopted dog’s behavior can surprise and even scare you. When this dog brought his old habits into his new home, his new owners were left baffled, and more than a little frightened. Our couple understood how important it is to adopt a new dog instead of buying one, so they decided to visit their local pound in search of a new addition to their family. The first dog they met seemed happy, affectionate, and sweet.

Little did they know, he would begin to show his true colors soon enough. They were about to get a lot more than they had bargained for…

He Seemed To Be The Perfect Fit 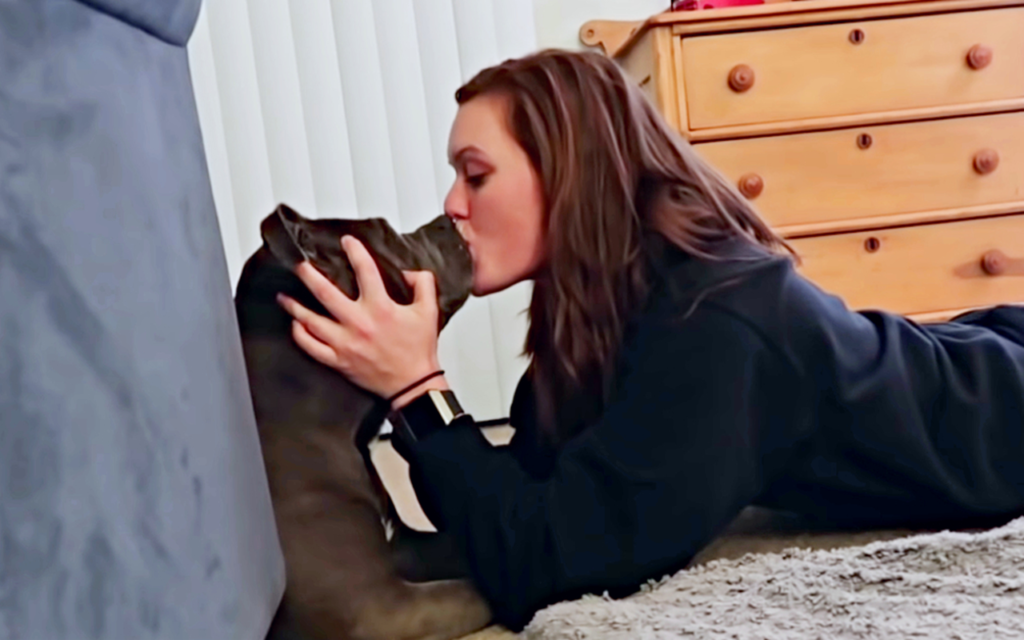 The new pup seemed to love his new home. But there was a noticeable change in his demeanor as he began to settle into his new family. It wasn’t long before his owners noticed that he had a startling habit.

During the day, the pup acted normally, but at night he would show his frightening flaw. The couple knew that this strange trait was a quirky one for a dog to exhibit. 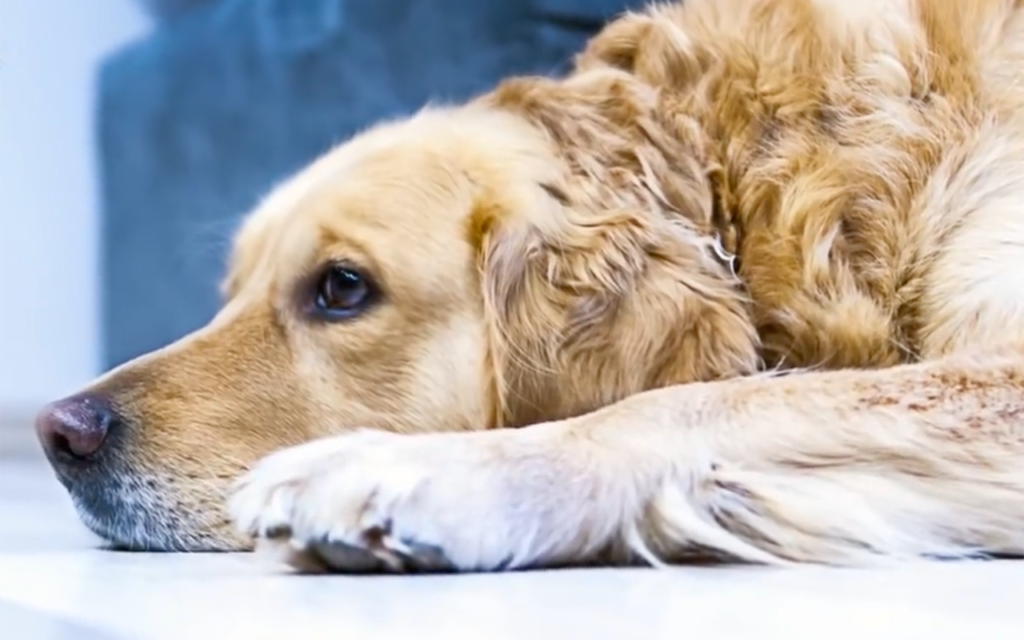 Every day, the dog would go about his business like a normal dog. But right from the first night he spent in his new home, he would stand at his new owners’ bedroom door while they slept.

The couple installed a childproof door to deter him, but it didn’t work. The dog just didn’t seem to understand that he was supposed to sleep in his dog bed in the other room. And sadly, his strange habit didn’t end there… 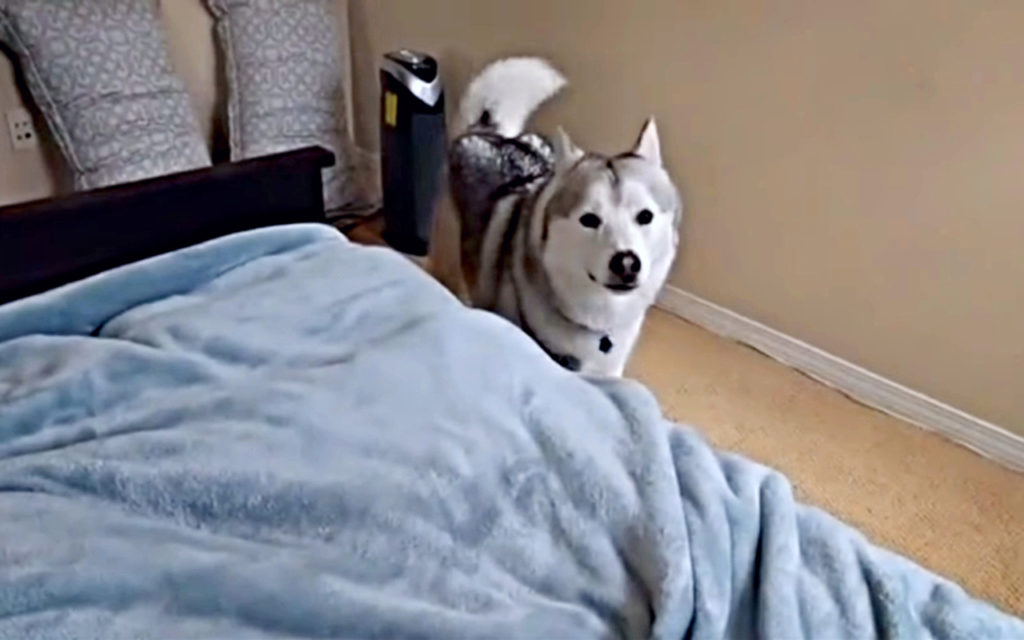 While it was an uncomfortable sensation to be constantly watched from the bedroom door every night, they were also concerned that the dog wasn’t getting any sleep at all! He’d stand and stare at his owners for hours while they slept. Every night without fail, he’d be there. The couple was dumbfounded.

They began to wonder why their dog was acting so strangely. Was his silent nighttime habit an indication of a serious problem? Or was their new dog trying to tell them something? But when they finally got an answer, they were heartbroken. 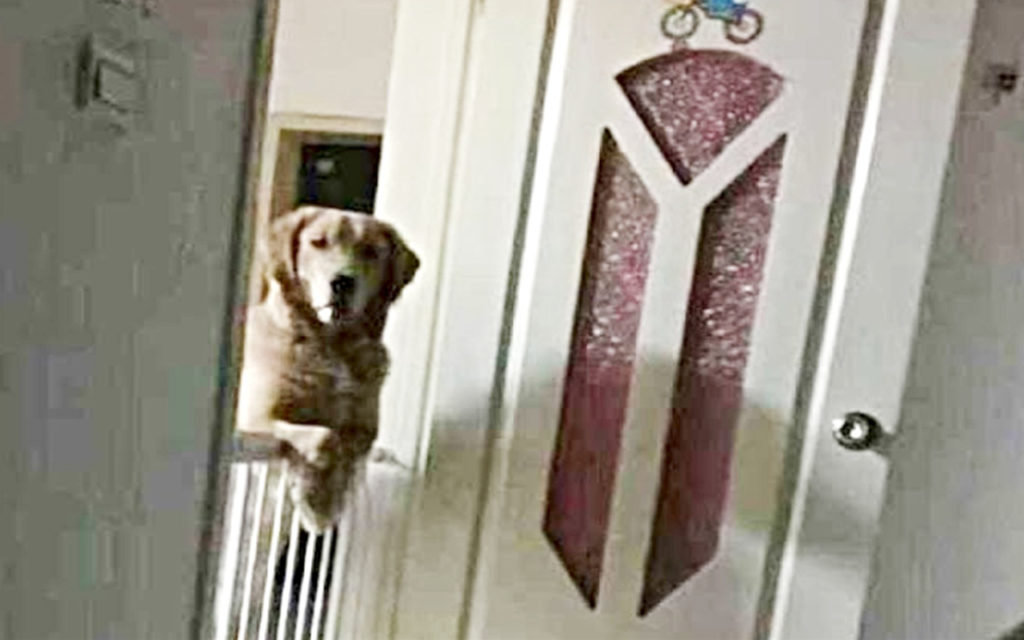 After a few more weeks of this strange behavior, the owners knew they needed to put a stop to it.

Although he napped throughout the day, surely this poor pooch wasn’t getting enough sleep if he spent all night staring down his new owners from the doorway. He seemed happy to continue his nighttime vigil, but his owners couldn’t help but feel concerned. But what could they do to ensure that their new family member was getting enough rest during the night? 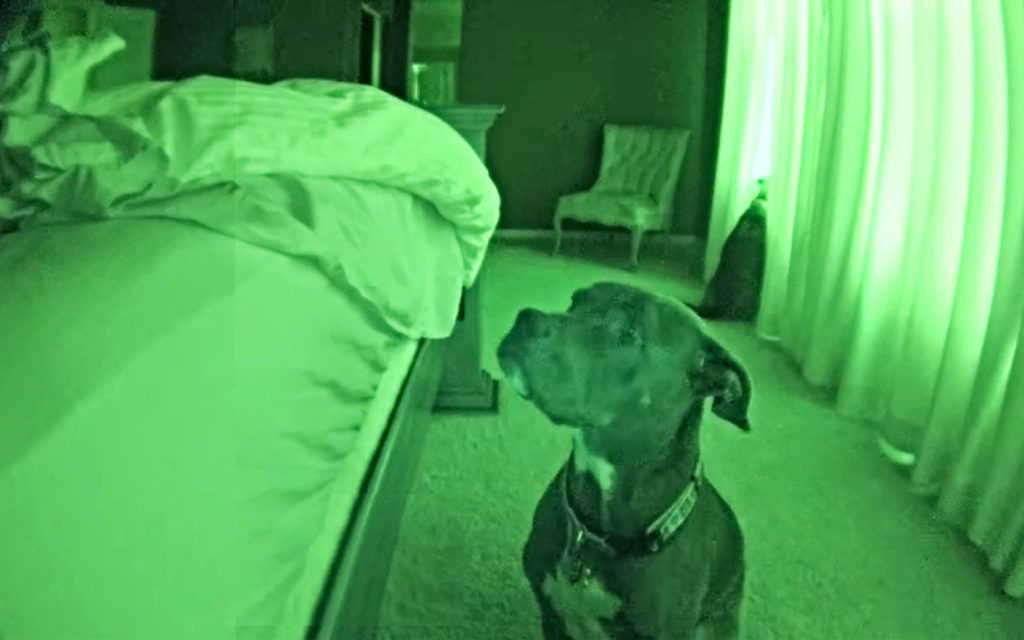 Even though the owners let their new dog have free reign over the house during the day, they believed that it was important to keep him out of their bedroom at night. They had owned dogs before and knew how important it was for him to have boundaries and an allocated area to sleep in.

But what routine had he been accustomed to in his previous home? Could his former owners’ habits have been so wildly different from their own? 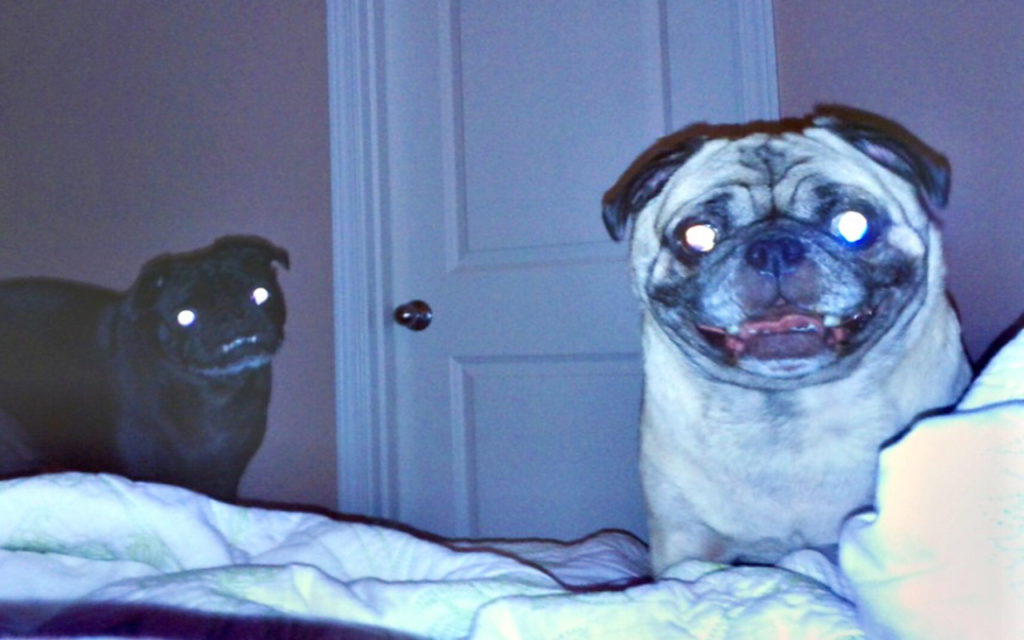 But the couple found that the strangest part of their dog’s nighttime staring habit was that it was done in complete silence. Most dog owners know that when their dog stares it is usually to beg for food or a treat.

But this dog’s behavior was different. He didn’t seem to want anything from his owners and seemed content to just watch them as they slept. Becoming more and more unsettled as the nights went by, the couple was more determined than ever to cure his disturbing habit… 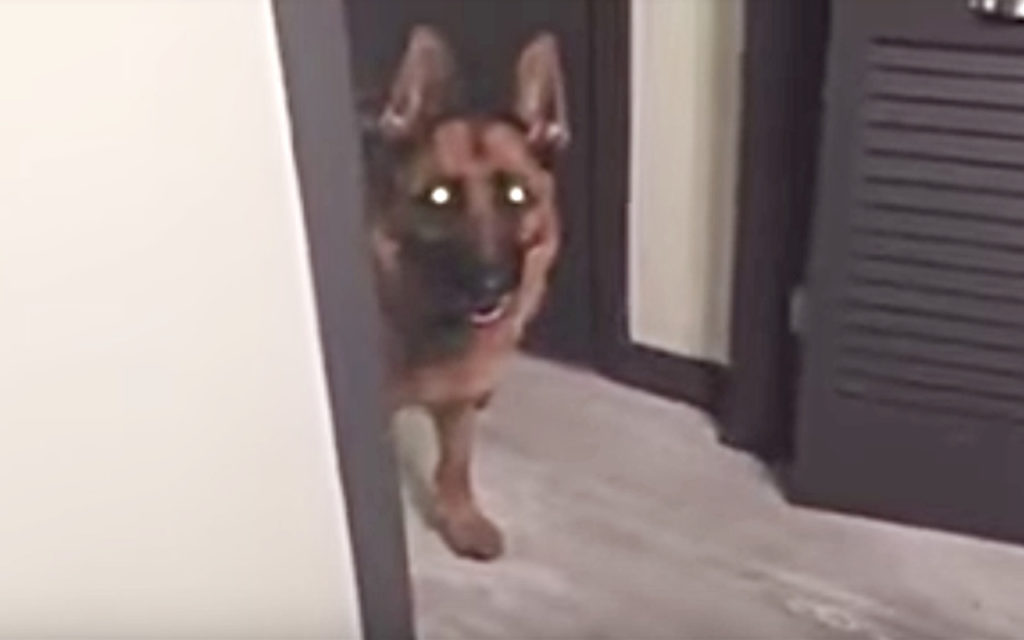 Now at their wits’ end, the couple set up hidden cameras in the bedroom. They needed to find out what their dog was doing during the rest of the night.

Unfortunately, there wasn’t a lot of new information to be gleaned from the footage. As they suspected, the dog continued to stare at them while they slept. And he didn’t move or make a sound for hours while he continued to watch them. There were short periods where he seemed to nod off for a few minutes, but then he snapped awake and continued with his unsettling night’s watch from the bedroom door. But the questioned remained… why? 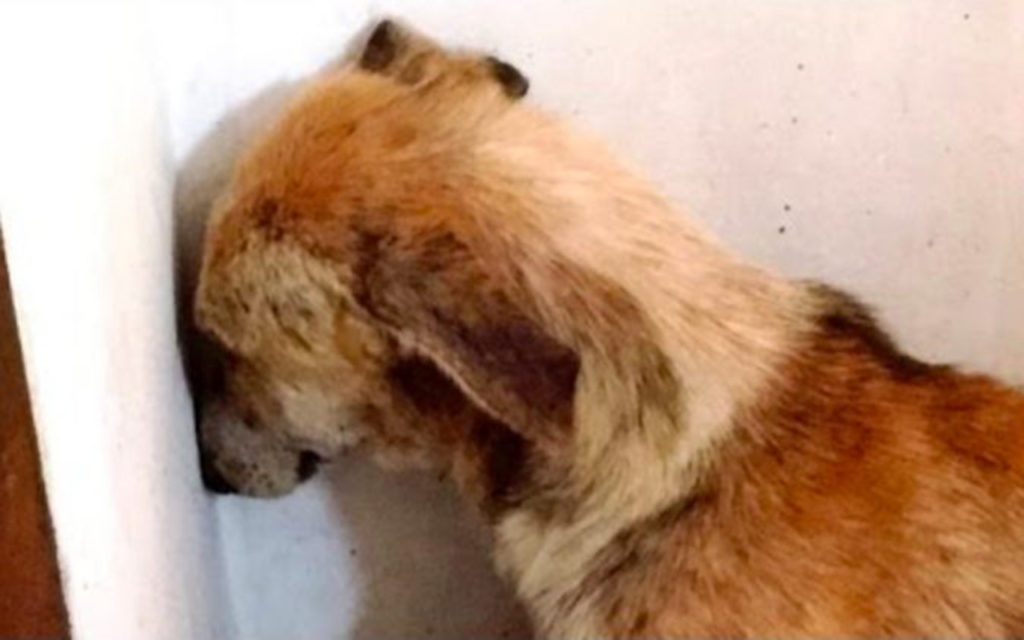 The couple tried everything. But even shutting the bedroom door at night didn’t stop the dog from keeping watch during the night. Although his owners had suspected that this would be the case, they were running out of ideas.

Could this poor dog have been so protective of his previous owners? And if not, where had he learned this bizarre behavior? When they found the answer, it was both surprising and saddening.

They Had Tried Everything The dog’s owners were now becoming desperate. They explored every possibility. They thought maybe the pup’s diet wasn’t right for him, so they changed the brand of food and treats they gave him. When that didn’t work, they bought him a new and more comfortable bed. But of course, that didn’t seem to work either.

Nothing they did seemed to deter their dog from his nighttime habit. Until one day, something surprising finally put it to an end.

Did He Need More Exercise? The couple began to think that their new dog didn’t sleep at night because he simply hadn’t been tired enough. They resolved to play with him and take him for longer walks during the day in hopes that this would tire him out.

And when bedtime came, he certainly seemed tired enough to want to sleep. His owners thought they had finally found the cause of his unsettling nighttime habit. But that night, as tired as he was, he continued to stare them down while they slept. That’s when they began to suspect that there may be more to their dog’s strange routine. His new owners were understandably worried about their new family member. They decided to take him to the vet for a checkup. But they hadn’t been informed about any health conditions by the shelter staff.

But could an underlying health condition be why this dog had been abandoned in the first place? Was there something that they didn’t know about their dog that the previous owners hadn’t been able to handle?

Trip To The Vet The vet looked him over and was puzzled. Thankfully, he appeared to be perfectly healthy. Not only was he cleared for any signs of illness, but he was happy, reactive, and extremely obedient for a dog his age.

His owners were completely baffled. If it wasn’t an undetected health issue that was causing their dog’s strange behavior, then what could it be? Would they ever get the answers they were looking for? That’s when they decided to visit the pound that the dog had come from. But they were completely blindsided by the story they were told when they arrived… The couple reasoned that if the vet couldn’t give them some answers, maybe the pound they had adopted their dog from would. Sure enough, their poor pooch came with a story that would perfectly explain his odd behavior.

When they heard what the staff at the pound had to say about him, they were heartbroken. The dog’s previous owners had decided that they couldn’t handle the responsibility of caring for a dog while they were also expecting their first child.

They had given him up when they had discovered that they were expecting a baby. In order to spare the dog and previous owners some heartbreak, they had packed him into the car carefully and dropped him off at the pound while he had been sleeping. But this would later prove to be a terrible decision.

No Time To Say Goodbye Taking the poor dog to the pound while he had been sleeping was a traumatic experience for the pooch. When he had gone to bed the previous night, he had been safe and comfortable in his home, with the humans he loved dearly.

When he woke up, he was in a cage at the pound, surrounded by people and other dogs he didn’t know. It far too much for the poor dog to handle… The dog was, understandably, frightened and skittish now that he didn’t have his owners around. He just couldn’t understand what had happened to the people he had grown up with and had loved for his entire life.

The staff at the pound knew that such a loyal and obedient dog would find a new home quickly, but they hoped his past experience wouldn’t lead to trust issues down the line, whoever his new owners may be…

Something Had To Give After his new owners found out his tragic story, they knew that they had to treat him with extra kindness and sensitivity.

They knew that dogs feel similar emotions as people do, and they had to do everything in their power to restore his trust in humanity. They were also aware that a dog exhibits the same level of emotional intelligence as human toddlers do. This means that a dog will understand and react to their environment as best as they know how. But was this dog equipped to move past what his previous owners had done?

They Vowed To Fix Him The couple decided to show their new dog that he didn’t have to worry about them abandoning his in the middle of the night. So, they gave in and let him sleep in the bedroom with them.

Sure enough, although the dog seemed reluctant to lie down and go to sleep at first and preferred to watch his owners, he began to fall asleep earlier and earlier at night. But would his new routine be enough to reassure him, or had his past trauma changed him for life? After just a few weeks, his owners began to notice a remarkable shift in their rescue dog’s behavior. They continued to let him sleep in their room at night and he began to adjust to his new routine.

But would his new habits replace his old, unsettling ones permanently? Would he be able to adjust to his new home despite the trauma he had gone through in the past? But over time, it became apparent that letting him sleep with them would be the best decision they had ever made. The dog was close enough to tell if his new owners moved in the night, and he was ready to protect them. But he was also close enough to them to be comfortable and get some well-deserved rest. But had he finally turned a corner? Letting their new dog sleep with them in the bedroom was exactly the change that the pup had so desperately needed. Now, he sleeps soundly, secure in the fact that he is close to his humans. He has given up his unsettling habit of watching them while they sleep.

This story just goes to show that dogs are incredibly sensitive to their environment and that they have an amazing level of emotional intelligence. All dogs need special care and a loving home — and they need them just as much as we do!