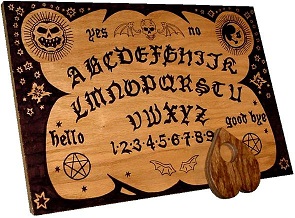 As children, we’ve probably all tried a Ouija board at one time or another. Remember how it went? Two or more players would gather around the board, and each would place two fingers on the planchette (the pointer). Each person would then ask the board a question one at a time, and, if there was a connection to the spirit world, the planchette would begin to move across the board, spelling out the answer. Sometimes, the board will answer with a simple “yes” or “no”, sometimes it will spell it out.

Generally, using a Ouija board is harmless. However, there are times when the connection to the spirit world can go very wrong. Sometimes, the connection will be to an evil spirit, a demon, or devil. In order to avoid such an evil link, one must follow the five rules of the Ouija board…

Ouija Board Rule #1
Never play with the Ouija board alone. This is for your safety both physically and mentally. Ouija board experiences are occasionally extreme and should this occur you will need someone with which to support you, both during and after the occurrence.

Ouija Board Rule #2
Do not allow the planchette to count down through the numbers or backwards through the alphabet. Doing could result in the spirit escaping from the board, allowing it to terrorize you and the other players indefinitely.

Ouija Board Rule #3
Always place a silver object upon the Ouija board before playing. Silver is known (ahem) for its power to repel evil energies.

Ouija Board Rule #4
Never, ever mention ‘God’, as it is believed that entities contacted through the Ouija board are generally ‘evil’ in nature. Some may appear “good” at first, but it is likely a demon who is playing tricks.

Ouija Board Rule #5
When you are done playing, say ‘goodbye’. Failure to close the Ouija board session by saying ‘goodbye’ may result in the contacted entity remaining present long after you have finished playing.

The movement of the pointer on the Ouija board can be attributed to something called the ideomotor effect. Humans might not be aware of it, but suggestions can be made to the mind by others, by observations, or by other mediums – and these suggestions can influence the mind and affect motor behavior.

According to The Skeptic Dictionary, tests devised by American psychologist William James, French chemist Michel Chevreul, English scientist Michael Faraday, and American psychologist Ray Hyman have demonstrated that many phenomena attributed to spiritual or paranormal forces, or to mysterious “energies,” are actually due to ideomotor action. Furthermore, these tests demonstrate that “honest, intelligent people can unconsciously engage in muscular activity that is consistent with their expectations” (Hyman 1999). They also show that suggestions that can guide behavior can be given by subtle clues (Hyman 1977).

So, when people go to play the Ouija board, they know in advance of what it’s supposed to do, they (often) expect it to give some sort of results, and unconsciously, they guide the pointer so that it gives “answers”. There are no demons or undead. There are no spirits. It’s just a piece of plastic/cardboard. Nothing more.

After all “If there really is an afterlife, I’ll bet the best way to contact it is through a plastic, mass-produced board game from Milton Bradley! –Mad Magazine”