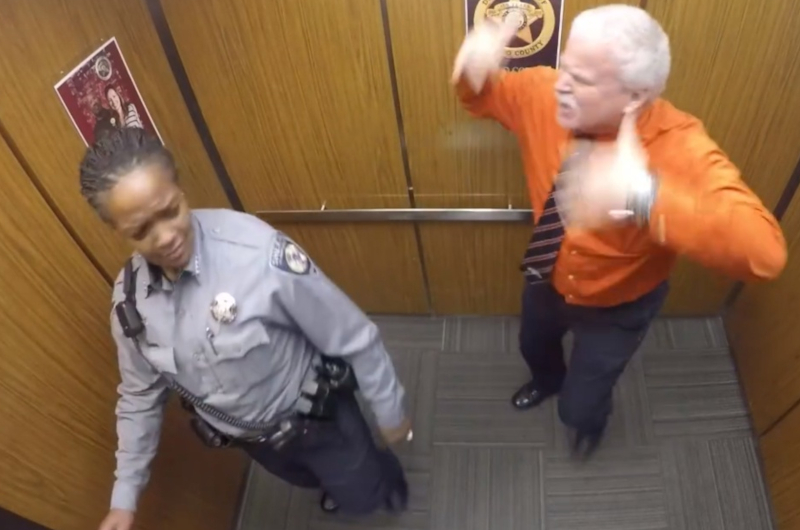 He felt the blood rush to his cheeks and his head spin. He had to sit down before he fell down. He though no one would ever see this! It was something no one should have ever set eyes on. Yet, there is was – in digital form and playing on his boss’s computer. 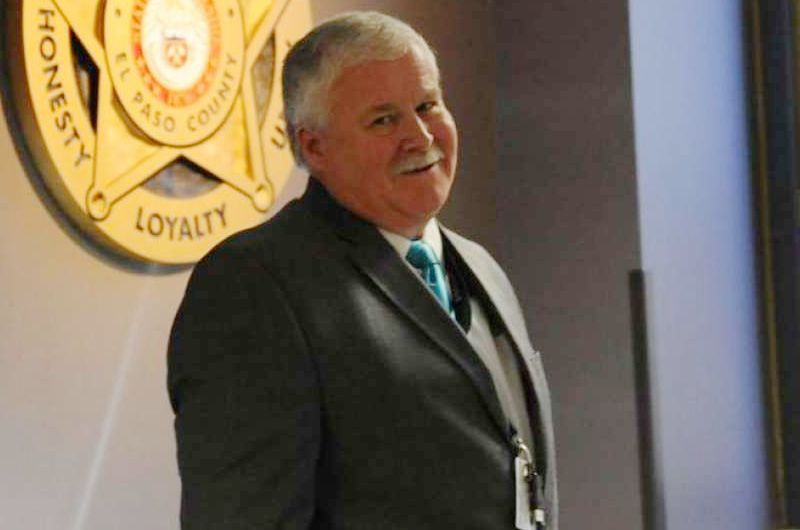 For Deputy Tony Scherb, the El Paso County Sheriff’s Office was like a second home. From traffic units to transportation to court departments, he had seen and done it all. He loved his job more than anything, but it was time for a big change – one he couldn’t avoid any longer. 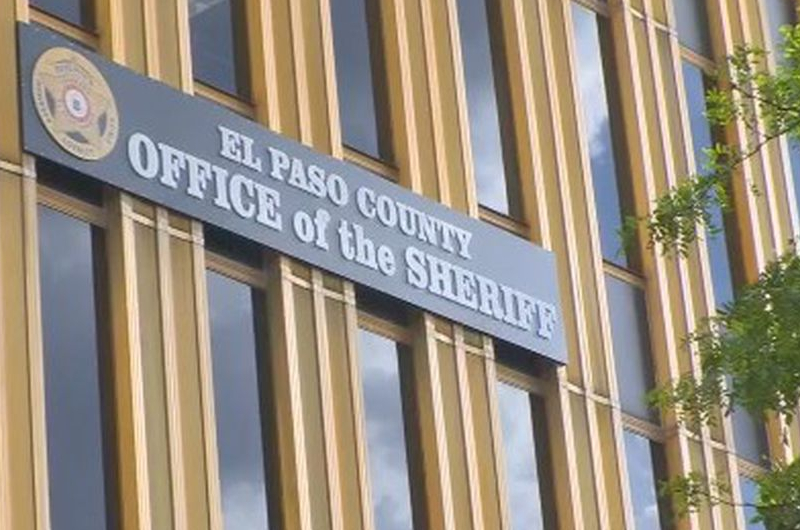 It had been 29 years of building friendships on and off the force, but now was the inevitable time for retirement. He would have to put down his badge and pick up a fishing pole instead. Little did Scherb know just before his departure, the entire force was going to see a side of him he would have rather kept secret. 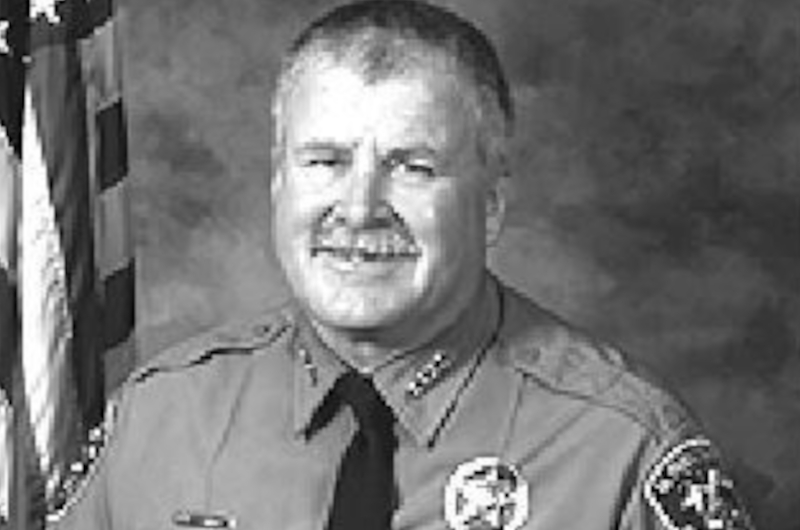 Part of him still blushed at the compliments from his co-worker’ and superiors – things like “highly professional and exceptionally knowledgeable.” However, if they only knew what he did in that elevator, he wondered what they would really think of him. 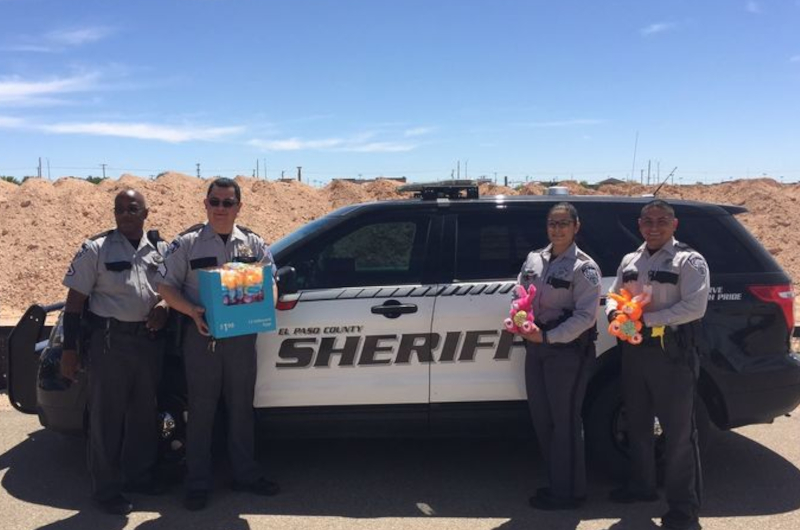 It was the couple weeks before his departure, but that didn’t mean he was off the hook for work. There was the unending stack of paperwork and public calls he had to make. There were also the mini-farewell-gatherings his co-workers would put together because they had a packed schedule. Everyone around him shared a very familiar expression he had known all to well for these 29 years.

It was stress. No one could be a cop and not feel the pressure. Between the dangers of the job, the need to be constantly professional, and the ever-present eye of the public, it was important to find ways to decompress. Some cops, however, too up bad habits to cope. 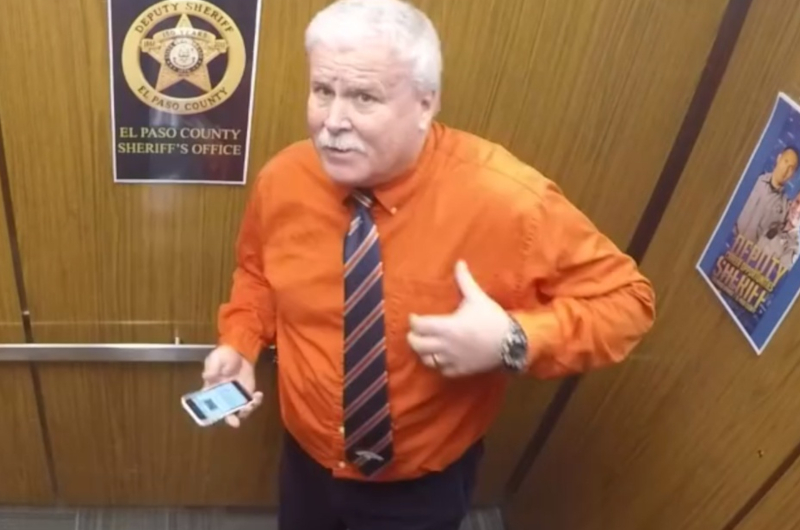 He had known some to look to the bottle or overdo it on cigarettes. This was why is “elevator ritual” was so important. It was the key to his happy demeanour for these last few decades. Scherb, however, had no idea his boss was about to install a hidden security camera right in the middle of his safe space. Apparently, the elevator had been having technical problems, and Scherb’s boss had the camera installed for extra precautions and to maybe spot why things were so glitchy. As Scherb started his ritual, he had no idea that everyone in and out of the building would see. 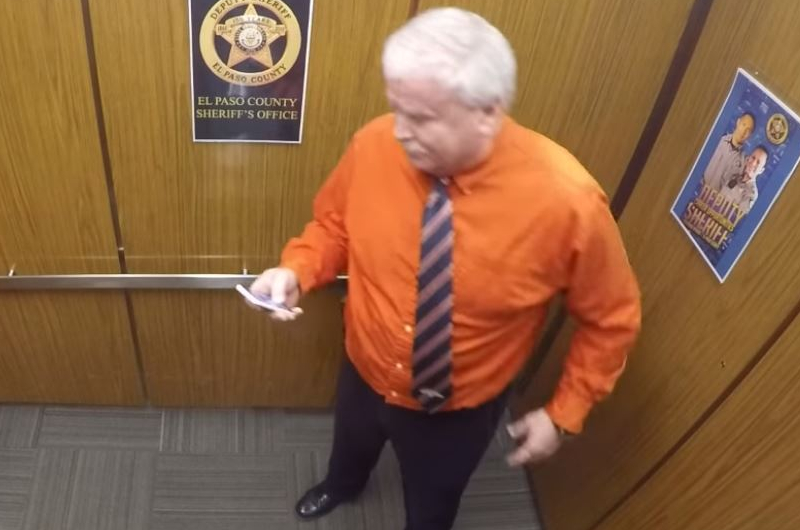 He pulled out his phone and chose his favorite app. It was a simple thing, but my oh my did it get the job done. The beat and melody started to flow, and he let his body move with it. This wasn’t dancing. They were silly, gyrating convulsions that helped him burn off the pressure. Then, the elevator door opened, and a colleague walked in. 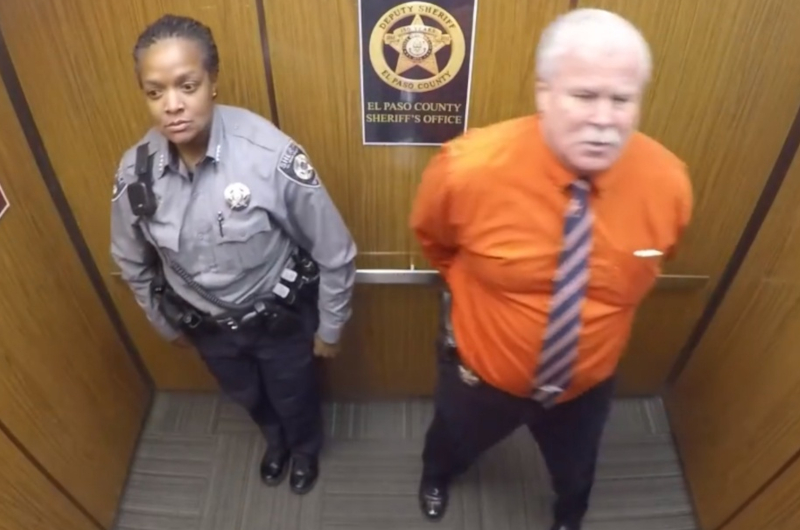 Scherb immediately went back to his formal stance, but the music was still going. His co-worker raised an eyebrow – mostly because it was probably a song she would never have imagined him listening to. Her tiny grin made him have a profound realization. 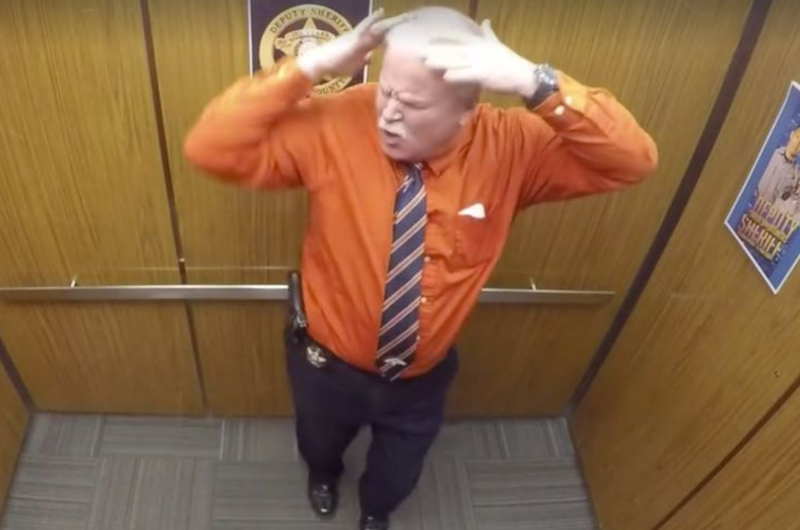 He was retiring! It didn’t matter anymore. He could be a goofy as he wanted. He was human after all and why shouldn’t he embrace the joy that came with his “elevator time.” He might even be able to spread a little joy to others as well. So, he started dancing again. The officer’s eyes went wide. It was a tension-filled pause as she processed what she was seeing. Then, in a beautiful show of “yolo” she joined in as well. The darkness from the day melted from her stance and she got into it as much as him! They danced and lip-synced to Silento’s “Whip/Nae Nae” … until the door opened again. This time the big boss was coming in. 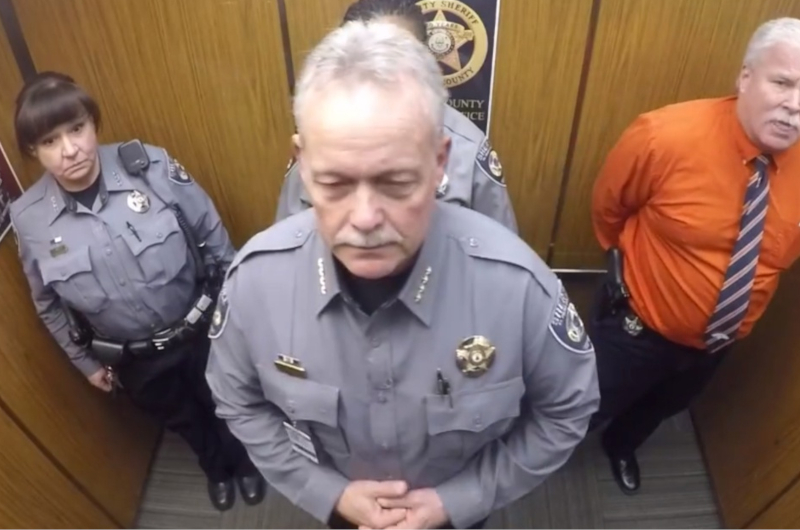 Scherb and his partner in crime froze in a professional stance. He even gave the sheriff a small salute – a genuine sign of respect for the man he had worked beside all these years. He also made sure to hit pause on the song. But the story doesn’t end there. In fact, it gets even better. 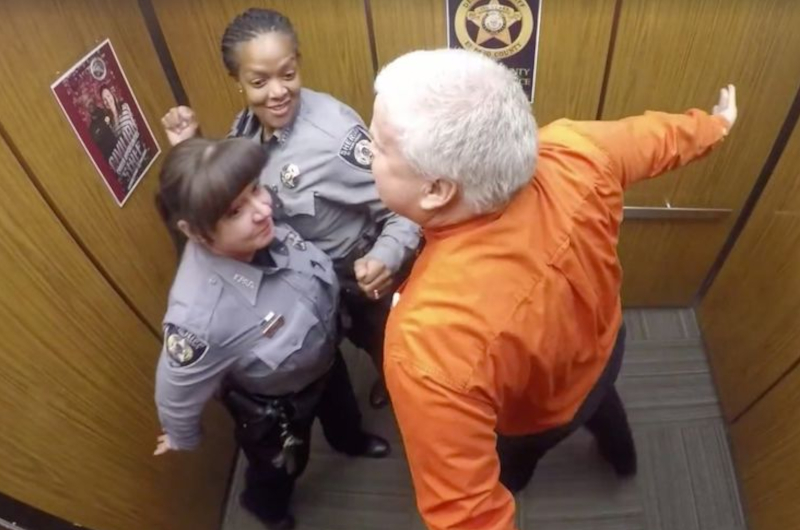 A soon as the sheriff left the elevator, and another officer got on, Scherb and the woman looked at each other with mischievous grins. He hit play again, and they both jumped back into their dance-off. The man watched them in shock. But what would he do next? It was beautiful. It was unforgettable. The third addition got right into the groove as well. Even a fourth officer found her way into the elevator party and shook her hips. None of them had any idea that the entire thing was being filmed and the boss would soon see it. Being called into the sheriff’s office wasn’t out of the ordinary, but as soon as Scherb saw his boss’s laptop with the security footage, he turned white as a ghost. “This is what you do with your free time?” his bossed asked. Scherb assumed the expected stance – standing straight with his hands resting behind his back. “Yes, sir.” 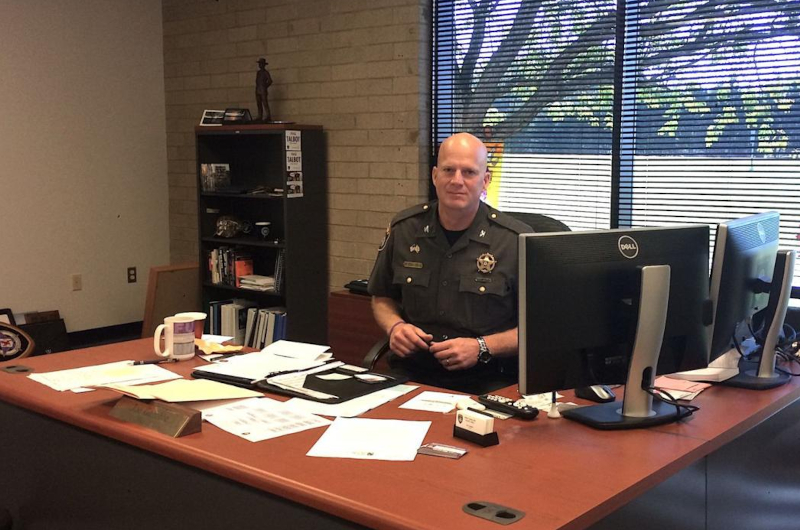 The sheriff glanced at the video again … then smiled! “I love it.” Scherb felt like he was about to pass out on the floor. His boss continued, “I would like your permission to post this on our Facebook page. People need to see that cops are humans too. And I love the comradery it builds.” The office didn’t expect much, maybe just a few “likes” here and there, possible a couple comments, but when everyone saw the view count skyrocket to 7 million, they couldn’t believe their eyes! They had gone viral! His boss went the extra mile and added his own glowing comments to the video. “Tony is probably one of the most hilarious, nicest deputies I’ve ever met. He’s had a stellar, stellar career and he’s going to be greatly missed. Just a quality person and a quality deputy.” The day came to a close and Scherb’s retirement officially started. Besides wishing the best for him, they all had another farewell. Many of them were going to adopt their own “elevator” ritual when it was just them or their coworkers. It was a stress-reliever that worked wonders. It was also a much healthier way to deal with the day. Scherb had not only left a professional impressive over nearly three decades he had left his own special, grooving mark on the entire office.