David had been having a particularly rough night, serving tables at The House of Oliver. The restaurant was packed and he was dashing from table to table, trying to get the orders in. But when someone left something on the table for him to find, he couldn’t believe his eyes.
When he went over to collect the bill, he was surprised to see that it was completely empty and the two diners were gone. He hadn’t even seen them walk out. Approaching the table, he prayed that they hadn’t dined and dashed. As it was, he was having a hard night, and he really didn’t need any more trouble. He opened the folder and breathed a sigh of relief. The money was all there. Just then, he noticed something else. It was a note. He began to read it, and then his world turned upside down.

Taking the Bad with the Good 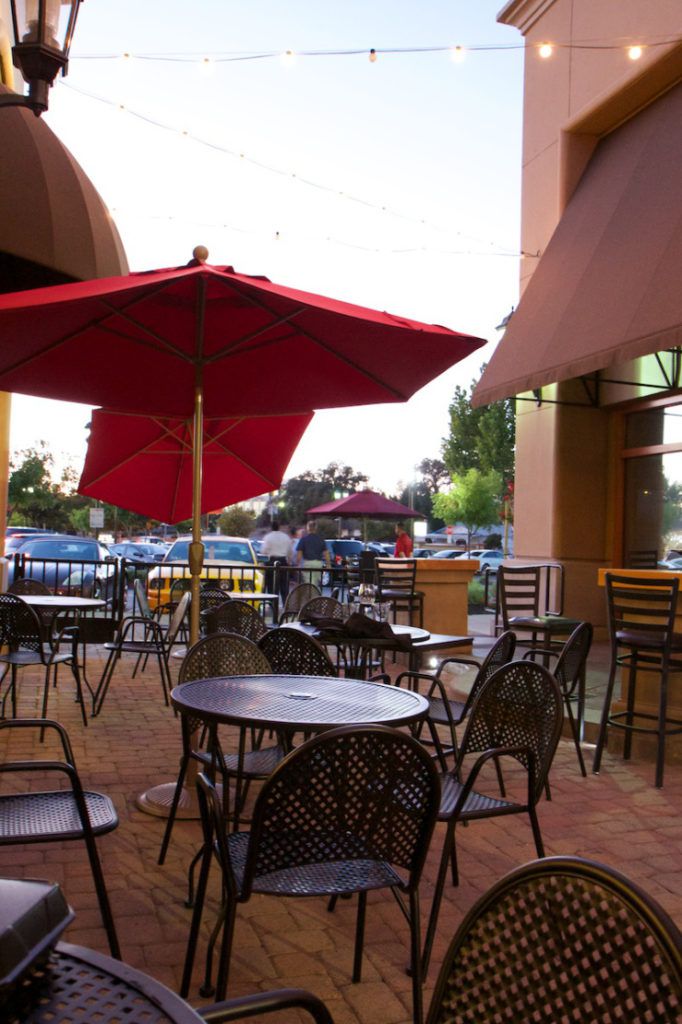 David was a server and bar porter, so he was used to having good and bad nights. The outcome usually would depend on the tips he received. David appreciated it greatly when some diners were generous and tipped well, but there was just no pleasing some customers who left meager tips even though David had tried to do his best and provide them with great service.
He knew that it was a part of life in the service industry, but he hoped that tonight would be worthwhile. He had no idea what was to come. 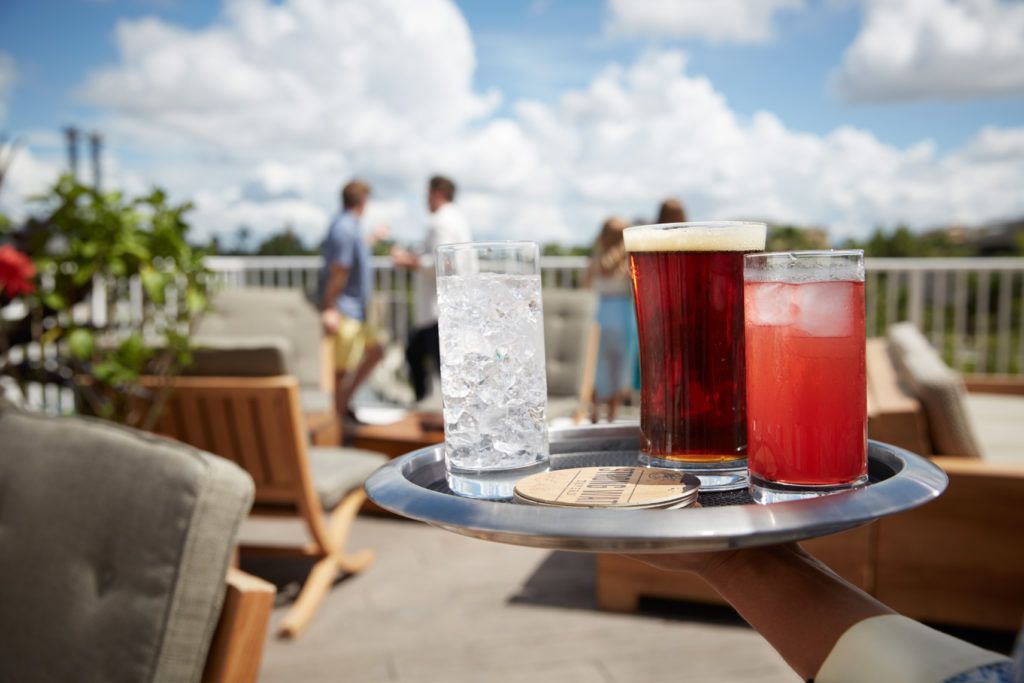 As the night went on, the restaurant became busier and busier. David soon found himself struggling to keep up. And the more the patrons drank, the harder they were to deal with. Meanwhile, a young diner and his friend had finished their meal and were waiting to ask David for their check.
David, in his frenzy, hadn’t noticed. When he finally realized that he’d left them hanging, he felt awful.


A Rock And A Hard Place 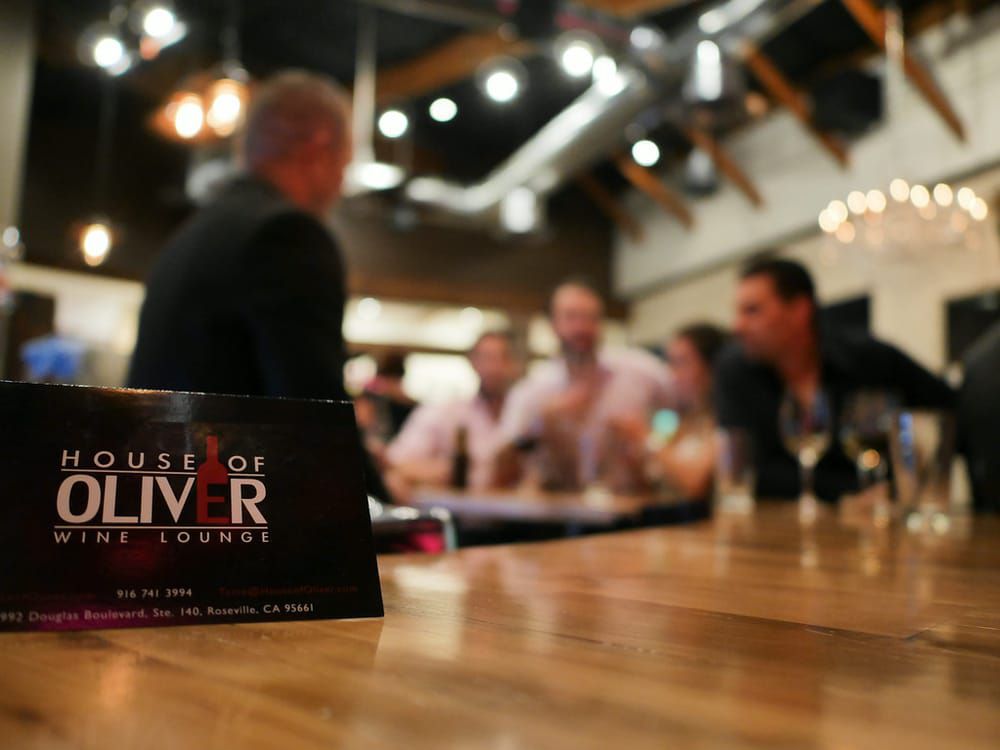 David immediately dashed over to the diners to present them with the bill and apologized profusely for the delay. Just then, another patron called to him and he couldn’t finish the conversation.
After tending to the other customers, he dashed back to the table but noticed that it was empty. He couldn’t help but fear the worst. 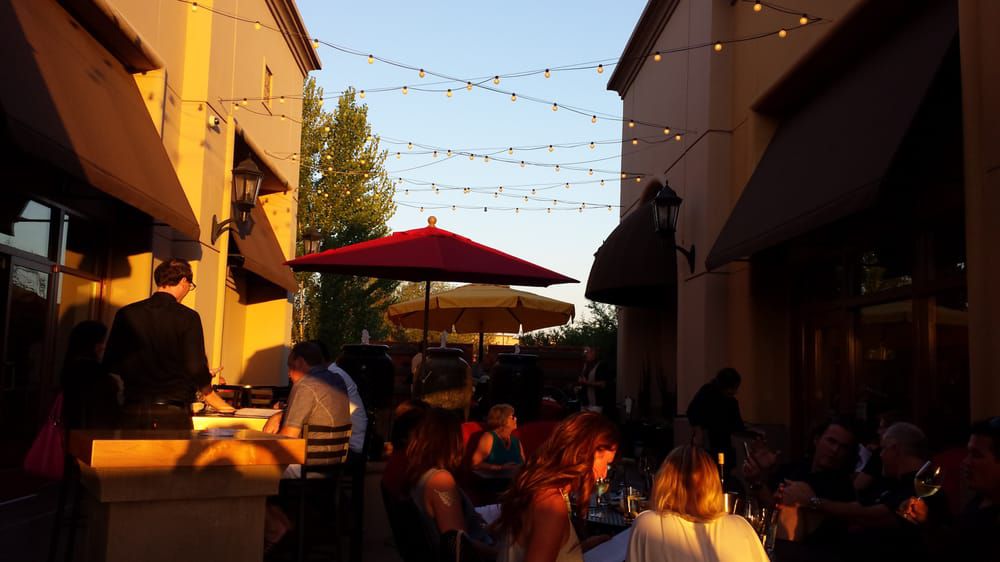 All the worst-case scenarios started to run through David’s mind as he imagined the customers leaving in a huff. Maybe they had been angry that he hadn’t served them as well as he should have. But there was nothing he could do about it now, all he could hope for was that they had paid the bill in full. He couldn’t deal with a dine and dash tonight.
But when he picked up the bill, he was relieved to see that they had left money on the table. Then he noticed something else — a note, written on the receipt. The handwritten note scrawled on the receipt read, “We’re young, but we’re worth serving.” David was perplexed. Then he looked at the wad of cash again and realized that it was thicker than it should have been. “I pulled the check out to close it, and when I pulled it out, that’s when I saw everything,” he recalled. “Their bill was very expensive, it was like $190-something — that’s exactly the tip they left me.”
David was gobsmacked. He couldn’t believe that this was his tip. It had to be some kind of mistake. There was one way to know for sure.


Making Sense of the Note 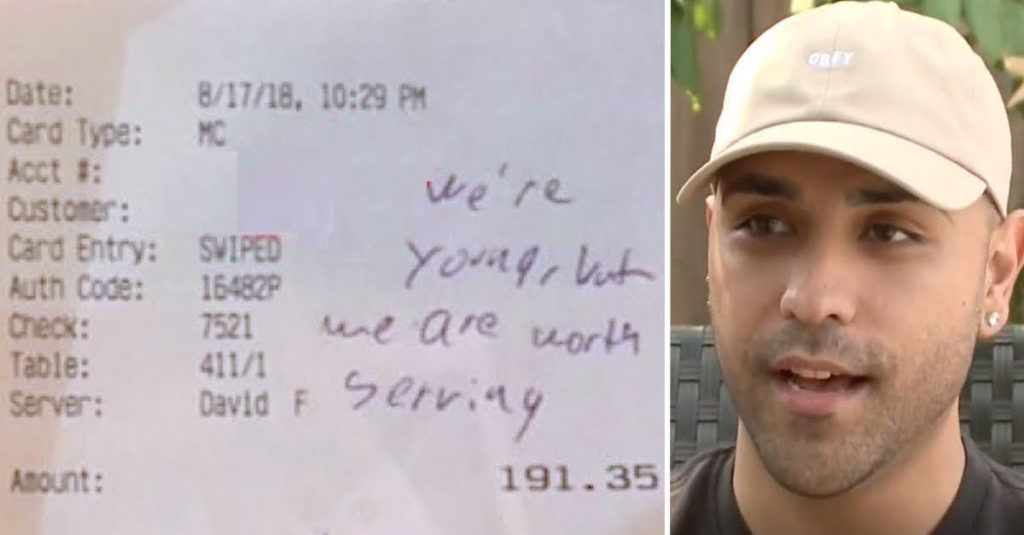 “Unless you work in the service industry, you don’t really understand how much tips mean to a server, to a bartender,” David said, completely overwhelmed that one customer would leave him a tip of almost $200.
The tips a server receives can make or break an evening of work, but this young man had made up for David’s entire night. He had to track the kind man down. David was able to find the mysterious stranger thanks to the power of social media. He found out that he was a 24-year-old college student at Sacramento State, and his name was Steffen Berr. David arranged to meet him so that he could express his gratitude, and when they got to talking, he was surprised to discover that Steffen worked as an intern.
This meant that he didn’t have a lot of money to give servers enormous tips at his leisure. But why had he done it? 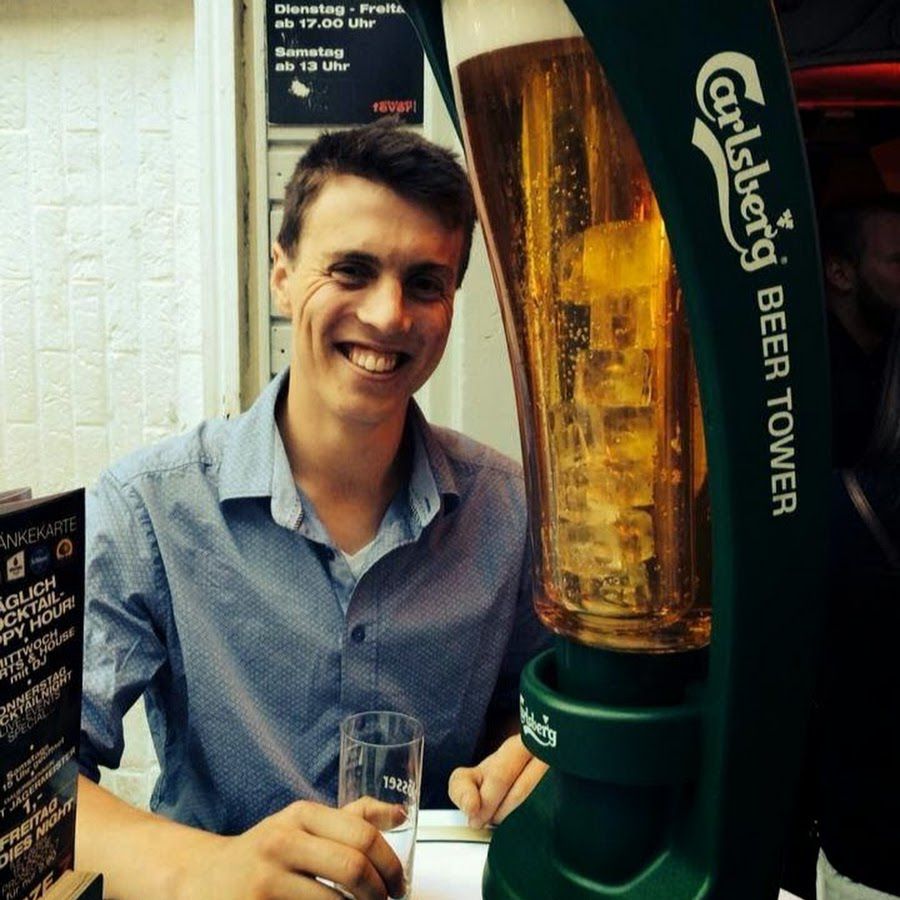 It turned out that it was a simple case of empathy on Steffen’s part. “I’ve been in his shoes before too, I used to work as a waiter in a diner in Texas, so I decided to show him what he did is appreciated,” he explained. He had seen how hard-working David was and how he had tried to serve his customers as best he could, even though he was busy.
Steffen decided to seize the opportunity to do something kind for David. But he had no idea what it meant to the server and his family. 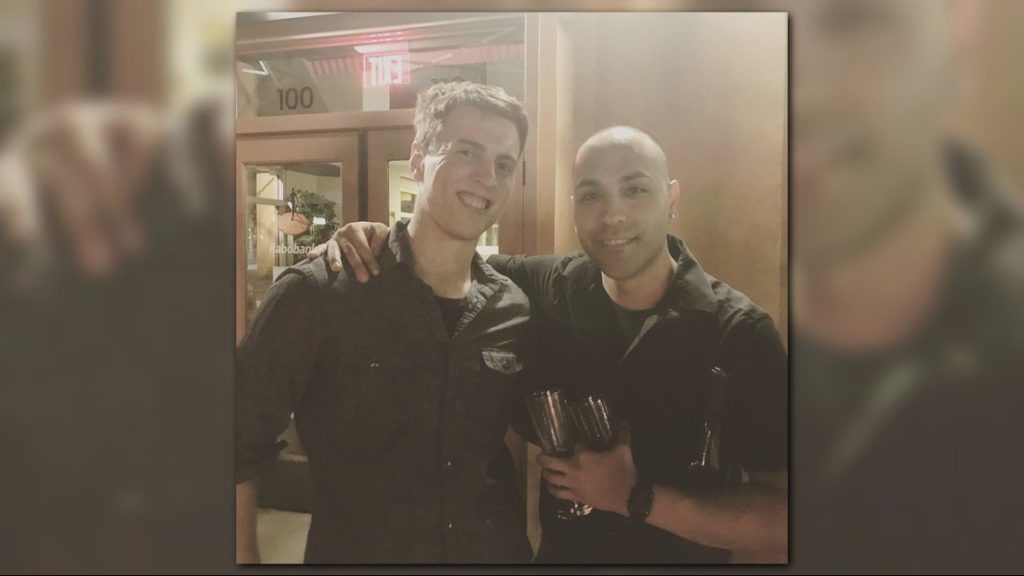 David had three children and another on the way. The $290 would go a long way to help David provide for his growing family. But Steffen couldn’t have known David’s situation when he decided to give him such a generous tip.
“I didn’t plan on it,” he said later. “It happened. I didn’t know his situation either. I am just really glad I did it.” Steffen was clearly in a festive mood. And he also had something to celebrate. 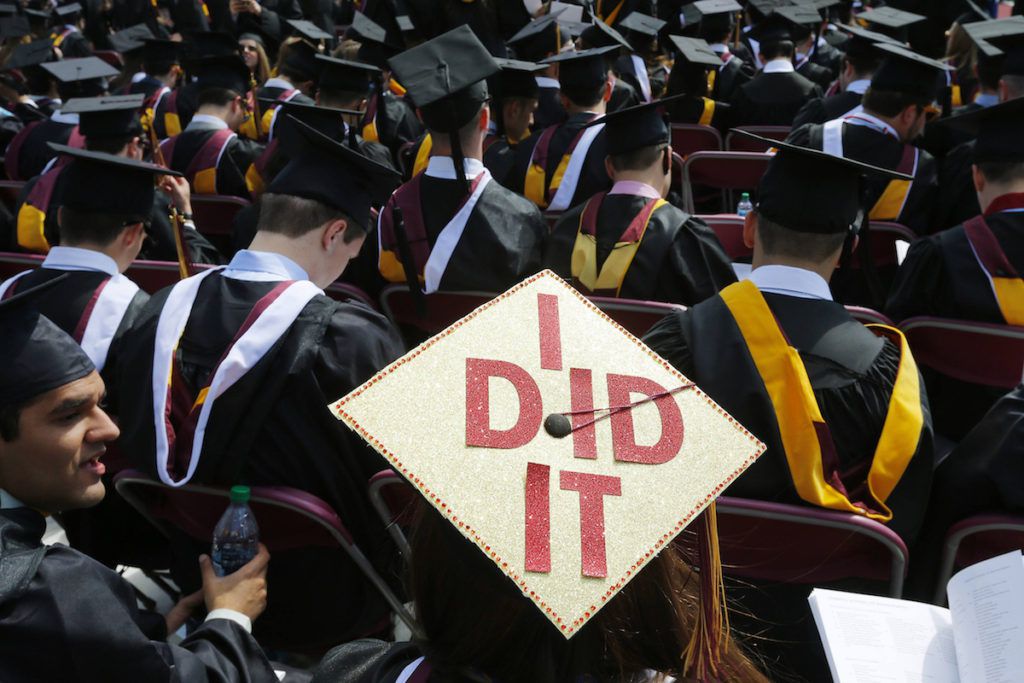 Steffen and his friend were at the wine bar that night for a particular reason: to celebrate Steffen’s completion of his senior year of college. And Steffen had wanted to pay some of his good fortune forward. “I had this money that I didn’t expect to have so I wanted to share some of that,” he said.
“I’m in a position where I have the resources and luck to do this so why not just go for it.” And Steffen couldn’t have found a more deserving recipient than David. David tried to express his gratitude to Steffen, but he had trouble finding the words. “You totally just made everything so much better and like I said, you have no idea what you did for me and what made it so great, that he didn’t know anything about me,” he said.
His story proves that doing something kind for someone in need makes all the difference. More people should follow Steffen’s example. And some people are doing just that. Steffen is unaware that people all over the United States have started matching their bills with their tips as part of a viral internet trend. This trend is called the “Tip the Bill Challenge.”
It was initiated by those who wanted to acknowledge the hard workers in the service industry by doing something kind for them. It is well-known that servers struggle to make ends meet, and there’s a reason for that. 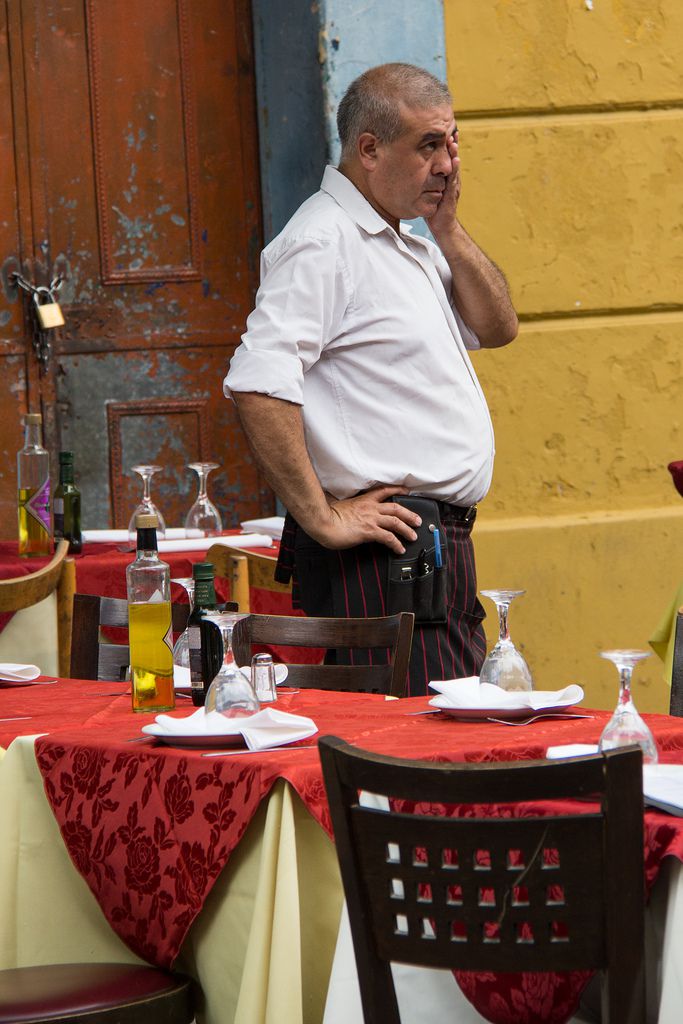 Not many people are aware that workers in the service industry aren’t paid in the same way as those with jobs in other industries. They receive a “tipped minimum wage,” which amounts to a fraction of the federal minimum wage. Tips are designed to cover the rest of a server’s income, but there is no guarantee that they will.
This leaves servers beholden to the whims of their paying customers, and it’s an unfair system. But there are some who are beginning to challenge it. 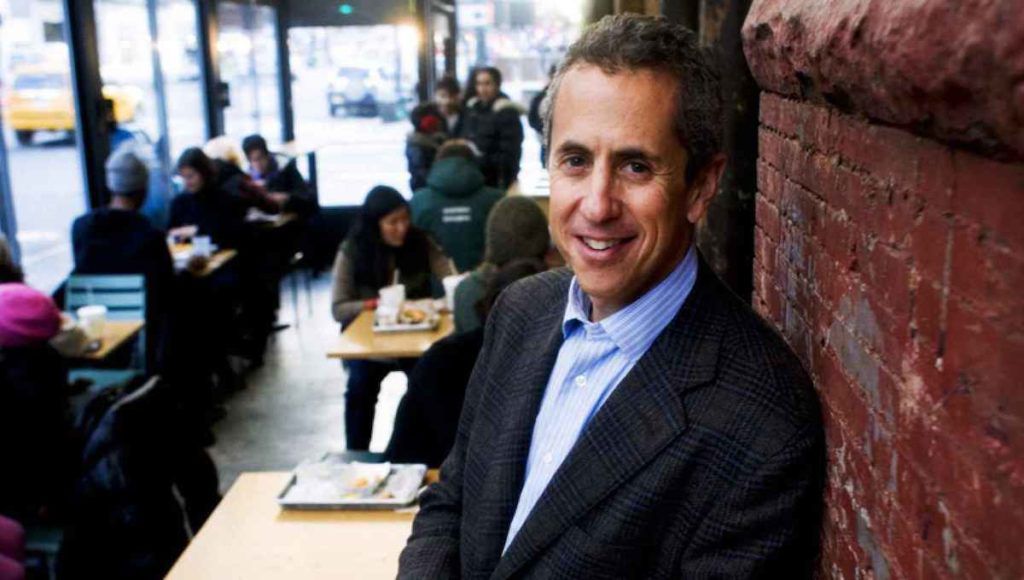 Danny Meyer, a restaurant owner who manages a wide array of bars and restaurants in New York City, has decided to do away with tipping altogether in is establishments. “I just decided — instead of blaming the tipping system for what didn’t seem fair or right, why not take it into our own hands?”
With Danny Meyer leading the way, hopefully, others will follow suit. This will ensure that service workers are given fair compensation for the valuable work they do.
Must Read
Three Indigenous Tribes In The United States Will Get $75 Million For Relocation Due To Climate Change
A New Supercomputer Simulation Animates An Incredibly Accurate Look At Universal Evolution
Genome Studies Manage To Find A New Branch Of Fungal Evolution