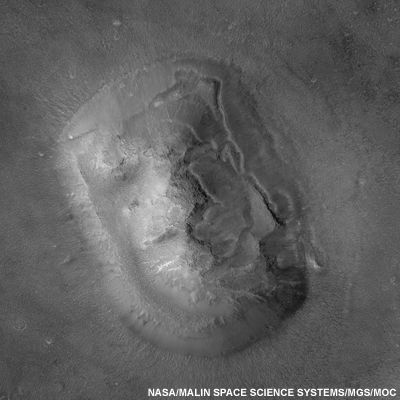 Since it’s dramatic landing on August 6th, 2012, NASA’s Mars Curiosity Rover has been sending back incredible images back to Earth.  Conspiracy theorists have been trawling through the publicly accessible photos taken by Curiosity and discovering mysterious objects that they say are proof of life on Mars.  These objects include a skull, an iguana (or perhaps another type of lizard), a pyramid, a rat, a spine, a hovering alien sphere, a humanoid deep in thought, and more.

In some cases, the resemblance to these objects is uncanny.

Play the slideshow to see the “evidence” for Life on Mars 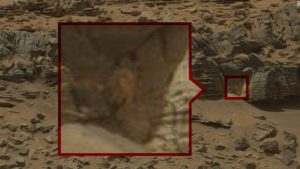 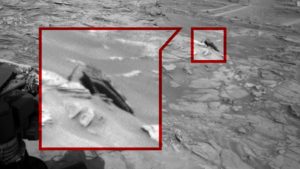 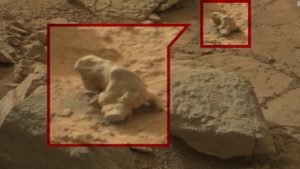 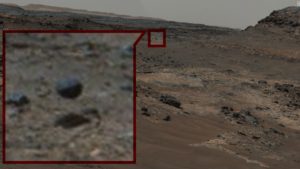 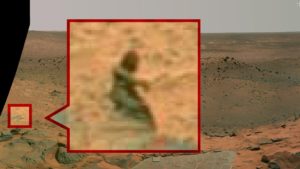 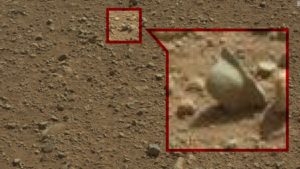 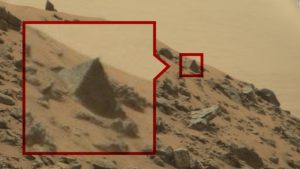 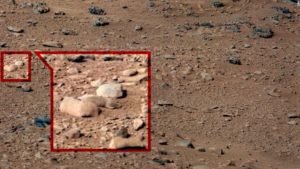 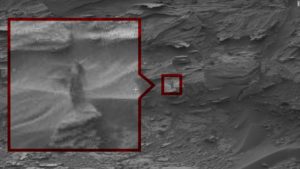 NASA has of course denied that any of these images are concrete evidence for life (past or present).  They say it’s just the shape of the rocks, the shadows, or our mind playing tricks us.

So what’s going on?

How are we seeing what we think we’re seeing?

Humans are really good at detecting patterns out of seemingly random noise.  As David Hume once said,

“There is an universal tendency among mankind to conceive all beings like themselves, and to transfer every object, those qualities, with which they are familiarly acquainted, and of which they are intimately conscious. We find human faces in the moon, armies in the clouds; and by a natural propensity, if not corrected by experience and reflection, ascribe malice or good will to everything, that hurts or pleases us.”

This phenomenon – detecting something seemingly clear and distinct from apparently obscure stimulus or noise – is called “pareidolia“.

In its first year on Mars, Curiosity sent back over 190 gigabits of data and 72,000 images.  That’s a lot of noise to sift through, and the more noise, the greater the probability that someone will find something that looks familiar

Having a name for this phenomenon is handy, but why are we making this cognitive error?  Michael Shermer, in his 2008 post in Scientific American, explains it like this (note, this has been slightly edited for brevity):

”Why do people see faces in nature, interpret window stains as human figures, hear voices in random sounds generated by electronic devices or find conspiracies in the daily news?

One cause might be the “priming effect“, in which our brain and senses are prepared to interpret stimuli according to an expected model. UFOlogists see a face on Mars. Religionists see the Virgin Mary on the side of a building. Paranormalists might hear dead people speaking to them through a radio receiver. Conspiracy theorists think 9/11 was an inside job by the Bush administration.

Is there a deeper ultimate cause for why people believe such weird things? There is. I call it “patternicity,” or the tendency to find meaningful patterns in meaningless noise.”

In a September 2008 paper in the Proceedings of the Royal Society B, “The Evolution of Superstitious and Superstition-like Behaviour,” Harvard University biologist Kevin R. Foster and University of Helsinki biologist Hanna Kokko tested my theory (of patternicity) using evolutionary modeling.  They demonstrated that whenever the cost of believing a false pattern is real is less than the cost of not believing a real pattern, natural selection will favor patternicity.

The cost of believing that the rustle in the grass is a dangerous predator when it is just the wind is relatively low compared with the opposite. Thus, there would have been a beneficial selection for believing that most patterns are real. Through a series of complex formulas that include additional stimuli (wind in the trees) and prior events (past experience with predators and wind) the authors conclude that “the inability of individuals — human or otherwise — to assign causal probabilities to all sets of events that occur around them will often force them to lump causal associations with non-causal ones. From here, the evolutionary rationale for superstition is clear: natural selection will favour strategies that make many incorrect causal associations in order to establish those that are essential for survival and reproduction.”

Such patternicities, then, mean that people believe weird things (like there’s rats on Mars, even though there’s no food source in sight for hundreds of miles…  or usable water… or any clear images… or, or, or…) because of our evolved need to believe non-weird things.

Revisiting the Face on Mars

Similarly, Carl Sagan hypothesized that, as a survival technique, human beings are “hard-wired” from birth to identify the human face. This allows people to use only minimal details to recognize faces from a distance and in poor visibility but can also lead them to interpret random images or patterns of light and shade as being faces.

In 1976, the Viking Orbiter 1 acquired some images of the Cydonia region of Mars as part of the search for a potential landing site for the Viking Lander 2. One of the images included a shot of a region that looked remarkably similar to a face. The image was released to the public by the Jet Propulsion Laboratory as part of their public relations effort.

Shortly after the images were released, some people (mostly in lay literature) argued that the face was artificially created, and that this was concrete evidence for either past or present intelligence on Mars. The rock formation indeed looked so similar to a face – how could it not have been designed by an intelligent architect?

Some believed the face was created by Martians, others said it was a tomb, or part of an ancient city. Others believed that NASA was involved in a conspiracy to cover up the true nature of the Face – all part of a secret space program… a grand conspiracy.

Mac Tonnies went so far as to say that the Face was a “genuine scientific enigma”. After NASA released new images of the Face in 1998, he claimed that the “experts either don’t understand the workings of their own instruments or else feel somehow threatened by the Face’s enduring mystery.”

“Scientific enigma”, The Face is not.

The 1976 version does look like a face, and if you strain your eyes, you might still see a face in the 1998 version. But what about the high resolution 2001 version?

Let’s look even closer at the 2001 version, just to be sure:

If we had the resources to retake Curiosity’s pictures, it’s probably safe to assume that these objects would reveal that (somewhat sadly) they really are nothing more than rocks, shadows, and optical illusions.

At least, that’s what they would like for you to believe…