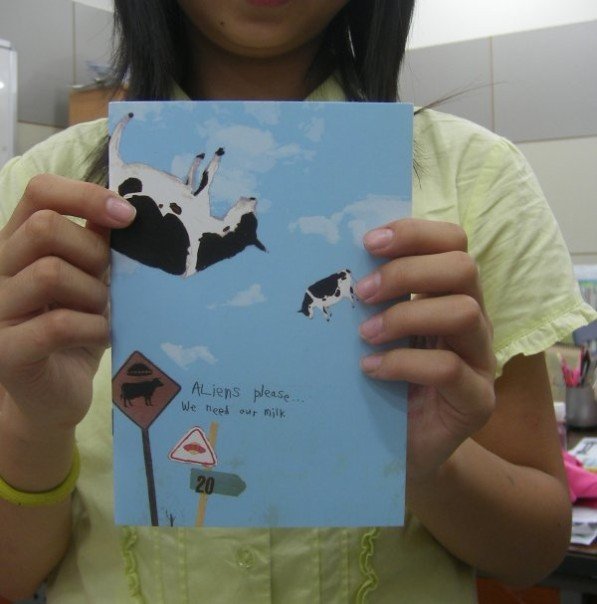 Conspiracy theories can sometimes be so compelling and well presented that it can be easy to be swept up in them. Thankfully, there are people out there who are experts in dealing with the misinformation and disinformation found within them.

Allow me to introduce Karl Mamer, host of The Conspiracy Skeptic podcast, who will take us through a discussion about conspiracy theories. Be sure to visit Karl’s site over at http://www.yrad.com/cs/ and subscribe to his podcast on iTunes.

Tell our readers a bit about yourself… what got you interested in conspiracy theories and how did it lead to the website and podcast?

I studied some informal logic in university (basically you study all the classic logical fallacies like Straw Man, False Dichotomy, etc.). It was a lot of fun going through letters to the editors and op eds and finding logical fallacies. It was like getting a university credit for doing crossword puzzles (and given my BA was in Psychology, I spent a lot of time in classes doing crossword puzzles). This was pre-Internet days (I’m 44). By the time I got onto the Internet I started noticing all these conspiracies on the old Usenet newsgroup system. I was like “oh, they’re using all the logical fallacies we used to have so much fun finding in my informal logic classes.”

As well, I did my honors thesis on urban legends. It struck me that many urban legends seemed to have the function to pass on safety tips (be careful of insane killers with sharp spikes for hands). At the same time, they seemed unnecessarily cruel and horrific. Did increased horror make the legend seem more believable and hence helped propagate the core message? I didn’t actually find this in my research. But when I started to encounter conspiracy theories on the net, I began to notice more parallels with urban legends.

At some point I started a site called The Conspiracy Arc-Hive that archived and categorized all the various conspiracy theories. The site died when the company that hosted the site for free died. Fast forward about 10 years and I was doing a podcast called Seoul Survivors. As the name implies, I was in Seoul and doing a podcast about thriving and surviving in Seoul. I tried to sneak in as much skeptical content as I could and my co-host Jennifer Young seemed a natural skeptic as well. After Korea I wanted to keep doing a podcast and do something that was all skeptical content. So I resurrected by interest in conspiracies. 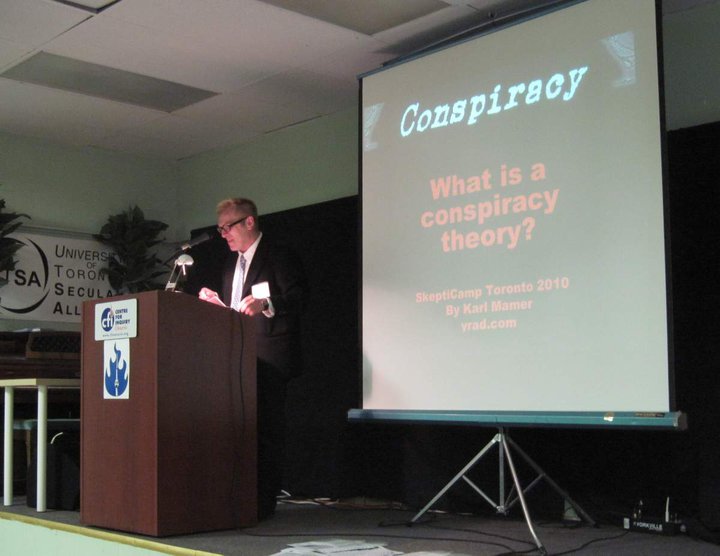 What exactly is a conspiracy theory, and what sets them apart of normal theories?

A conspiracy theory is basically a seemingly tidy narrative that tries to explain some given set of conditions, typically conditions the conspiracy theorist doesn’t particularly like: Why is there still cancer? Why do I not have the power and prestige I think I deserve? How come we’ve not gone back to the moon? Why is George W. Bush so darn evil?

Any good explanation, of course, starts with a narrative. “I think Rome fell because of x, y, z.” As humans we can’t help but try to tie together random facts into a sanity preserving narrative. But real theorists (from scientists to historians) take that extra step to marshal positive evidence for their theory. They consider evidence against their theory.

Conspiracy theorists, on the other hand, start and stop with their convenient narrative. They rarely have positive evidence. They seem content to rely on a belief that if it could have happened that way then that’s good enough. It’s a classic god-of-the-gaps fallacy but for conspiracies. I can’t explain why this 22 year old would shoot up a school, therefore I know why: CIA mind control.

To that end, I’d say the conspiracies that I’ve learned the most from, hence my favorites, are:

The International Banking Conspiracy: You really got to delve a lot into finance to figure this one out.
HIV is a Myth: An interesting education in virology and what a disease actually is.
The Bilderbergs: You learn a lot about Western European post-war politics.

What’s the deal with the “New World Order”? I hear this come up time and time again as an overarching conspiracy theory…

There’s a problem with the term itself. It was used a lot in the early part of the 20th century in a manner very different than it is used conventionally today. It’s a bit like how Darwin would talk about “favored races” but that would sound racist to us today. To a historian of International Relations, when politicians talked about a new world order, they were talking about a remarkable new idea where nations (mostly nations that had fought for a long time over colonies) cooperated, not competed. It had nothing to do with giving up national sovereignty.

Today, it’s used by conspiracy types to mostly mean just that: nations giving up sovereign rights to some one world government. It’s a catch all label that really explains nothing. Even granting someone has a plan to create a one world government, just as someone had a plan to tie together 13 colonies into a “united states”, you have to ask your friendly neighborhood conspiracist what is the difference between a nation state giving up some portion of sovereignty to a super state as compared to Delaware giving up some rights to form a new super state?
To my mind, there is no difference. As long as it’s the will of the voter.

Many conspiracy theories are harmless – stuff like crop circles, or the government hiding information about UFOs and aliens – but what about conspiracies like 9/11 (the Loose Change video) or the generally angry sentiment towards Big Pharma… do you think there’s any harm in these?

I remember arguing with an HIV denialist and he claimed if HIV were real, they should be able to photograph it. I pointed out to him a photo of the virus on the wiki page. He noted the photo credit indicated the photo was from the CDC. Since the CDC was owned by the government and the government lied to us about 9/11 then they weren’t above faking HIV photos. *face palm*

The problem with many conspiracy types is they’re always prepared to disbelieve the official story. But sometimes the official story is true. Sometimes not believing the official story can harm you or the ones you love. Yes, sometimes Big Pharma tries to sell us (or doctors) on drugs we don’t need. But probably most of the drugs they sell are safe and effective. Yes, sometimes governments lie to us. But when they tell you your milk is safe to drink or your baby car seat is safe for your child, they’re likely telling the truth. Conspiracies can lead us so far down a hole of distrust, it’s a wonder how some of these people leave their house in the morning.

I’ve debated with conspiracy theorists on a number of occasions, and found it to be very difficult to “win” the argument. For example, someone will make a claim that “crop circles are made by aliens”, and I’ll point out that this has, time and time again, been proven to be a hoax. In fact, the people often admit that they did it! But the conspiracy theorist will argue “they’ve been told to say that – it’s all part of the conspiracy.”…. So how do you debate a conspiracy with a “true believer”?

As noted above, don’t debate to win. Debate to learn. And debate to convince the fence sitters. Most of us, especially when we were younger, grew up believers in UFOs, ancient aliens, and psychic powers. As we got older most of us probably became more fence sitters. But when we saw there was another explanation, one based in verifiable fact, we got off the fence. Don’t underestimate the number of people who can, online, look into your debate and see when the facts are on your side.

Do you think you’ve ever been able to change a conspiracy theorists’ mind? Or is that pretty much impossible?

Probably not. They know they have the truth. Even if you show them the facts don’t support their position, they will always be able to take shelter in the belief the facts are simply made up or new facts will eventually emerge to prove they were right. Still, have you ever argued with a friend and passionately defended your position but then mulled over the arguments later and shifted your position? Ah, maybe you can get some people to shift their beliefs over time. And don’t forget, sometimes people have a growing sense they’re actually wrong but argue passionately for their belief to convince themselves they’re right and don’t want to abandon a comfy world view. Again, time can be an ally. 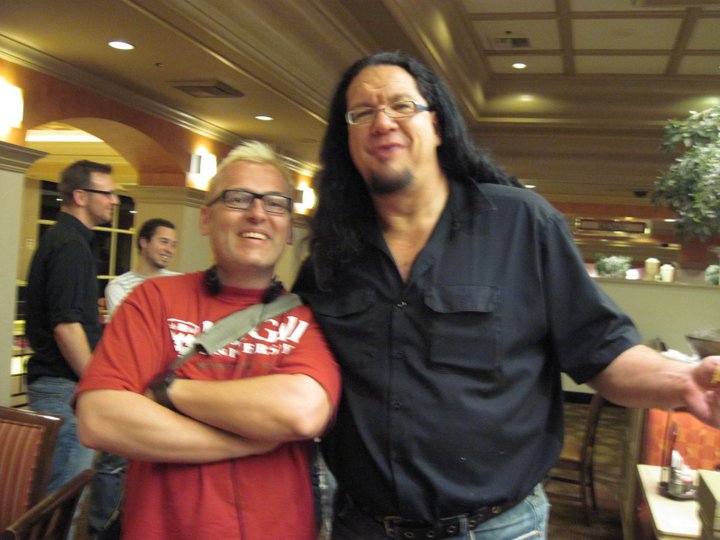 Any final words for our readers? Any shoutouts?

For your Canadian readers, Vision TV has a new conspiracy TV show. I’ll be the skeptical guest on the March 18 and March 25 episodes. I might only have 2 minutes of screen time. If they use my best stuff, I like to think I got some of the conspiracy claims dead to actual facts.

As of this writing, I’ve only seen the first two episodes. It’s better balanced than Jesse Ventura’s awful awful conspiracy series. Ventura’s show leaves you actually stupider. The Canadian conspiracy show is hosted by Richard Syrett. One of Syrett’s producers is a skeptic, Ron Craig. His hand in the show gives me some confidence.

Like I say, I’ve only seen the first two episodes so far. As a skeptic, I would have naturally liked if they gave the skeptics more screen time. Or there was more of a point-counter-point aspect. Some of the believer claims really begged to be challenged. For example on the UFO show, the believer guest trotted out the claim that George Bush as head of the CIA denied a specific request by President Carter for UFO information. As any skeptic who listens to the SGU podcast knows, Jimmy Carter himself was quite clear that incident never happened. It’s a fabrication of the UFO community that gets told and retold.

Beyond that quibble, Syrett and his crew seemed to do their best to get the best skeptics they could for each episode. Each skeptic went in with eyes wide open. This wasn’t an Expelled type stitch up. Syrett himself hosts a Coast to Coast type radio show that delves into conspiracies and paranormal topics. Syrett has his beliefs and the Coast to Coast type are his constituency.

A new TV show that can bring in a core audience has a better chance of getting made. However, Syrett struck me as a reasonable and genuine man and just a really, really nice guy.

Anyway, it’s not Penn & Teller’s Bullshit!, but Syrett’s Conspiracy Show certainly gives skeptics more screen time than any woo-show infesting History channel these days. If there’s a Season 2, I sure hope I can weasel my way into the show on the writing, research end!