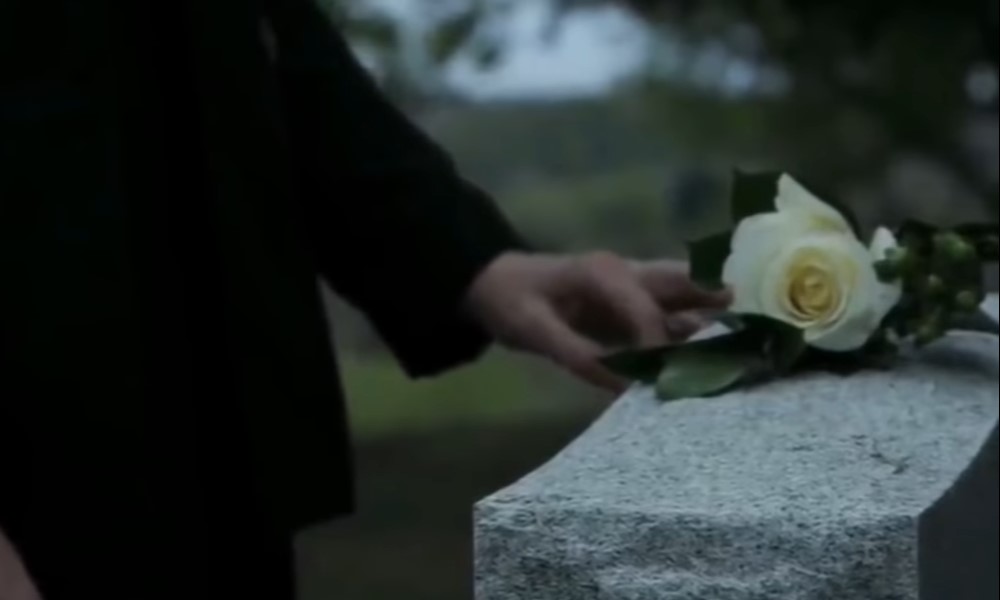 She couldn’t believe her eyes, did someone really want to do this? It wasn’t just about her, it was what it did to her son. How could they take something so precious that she had given as a gift?

Her husband was just as upset as she was. They needed to figure out who had done this. So when they finally viewed the footage they had watched, they couldn’t believe it. 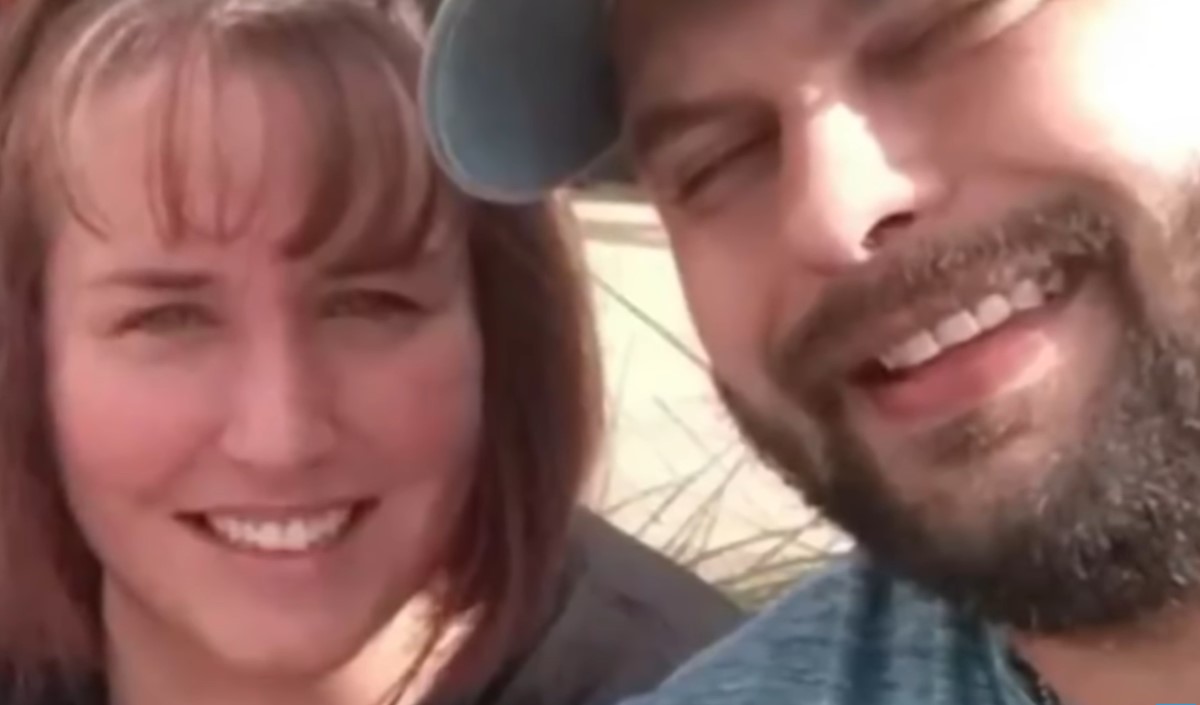 Michael and Ellen Wright thought they were living the best life. They wanted to spend the rest of their lives together and after they got married, they had two kids together, life was perfect.

Then when they saw that they were going to have a third, they couldn’t believe their luck. But things would soon change, and not for the better. They waited to be three months into Ellen’s pregnancy to be sure, then they announced it to their family. Everyone was so ecstatic for them. But soon everyone’s happiness would be taken.

After nine months of pregnancy, they sadly lost their unborn child. They mourned him for months, they decided that they would give him a proper burial, the one that he deserved. 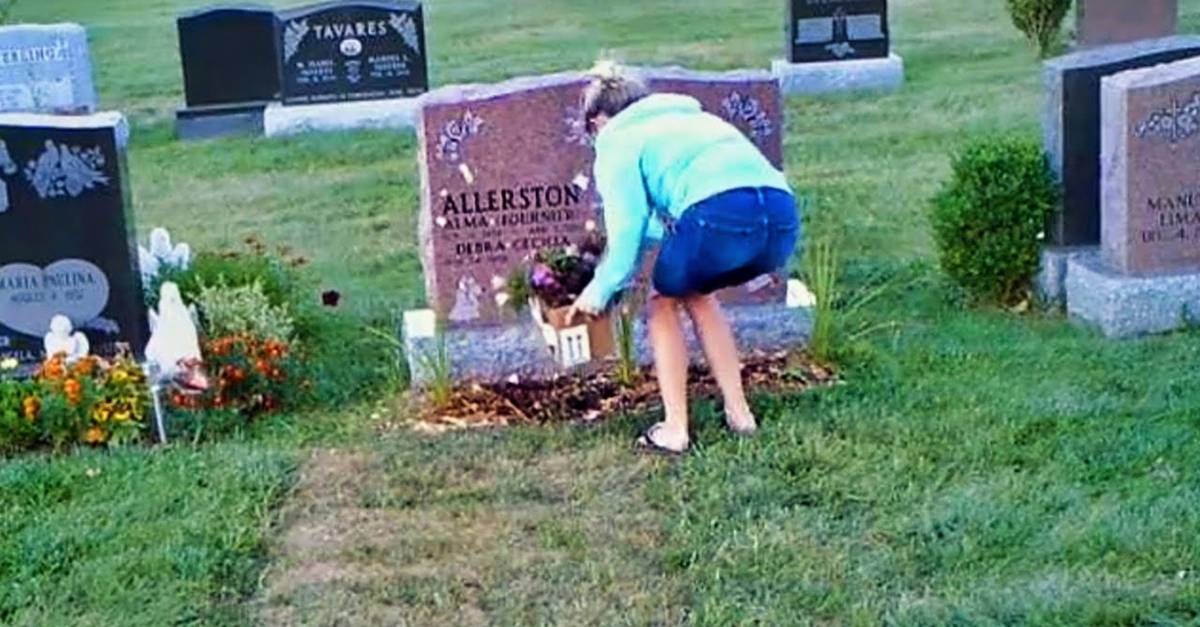 They wanted to do things right, they spared no expense and did it the proper way. They made a plaque that read “Gabe Wright, Son of Michale and Ellen Wright.” It also had a beautiful cross.

They felt good about what they had done for their son. They did the only thing that they could do for him. But they hadn’t thought of every possibility. But Michael started to notice that something was missing, the last week he had visited the flowers were gone. They had replaced them, but it was weird that they were gone. But neither of them could have ever anticipated what was actually going on. 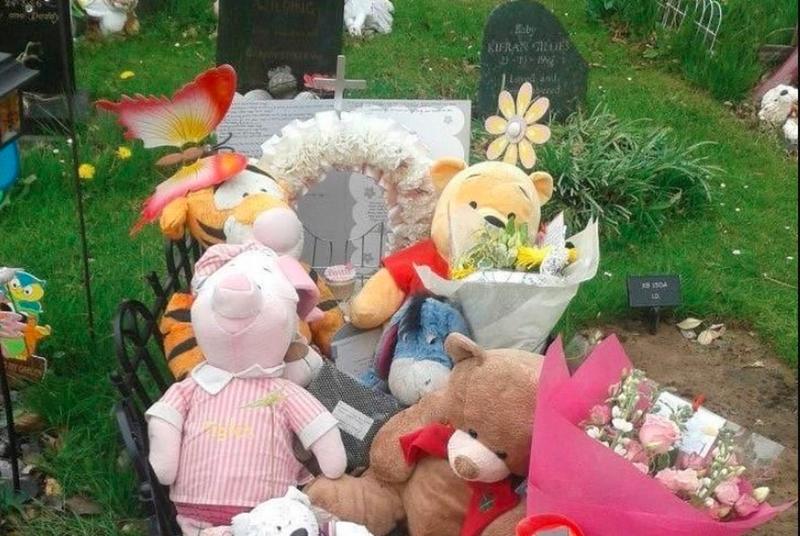 Michael and Ellen noticed that every time they visited, there were more gifts left behind by other visitors. Even if Gabe would never have a chance to receive any of them, his parents knew that the love shown more than enough.

Many things had been left behind like flag, pinwheels, and other wonderful toys, but soon they noticed something very strange that couldn’t be explained.

Going To The Cemetary 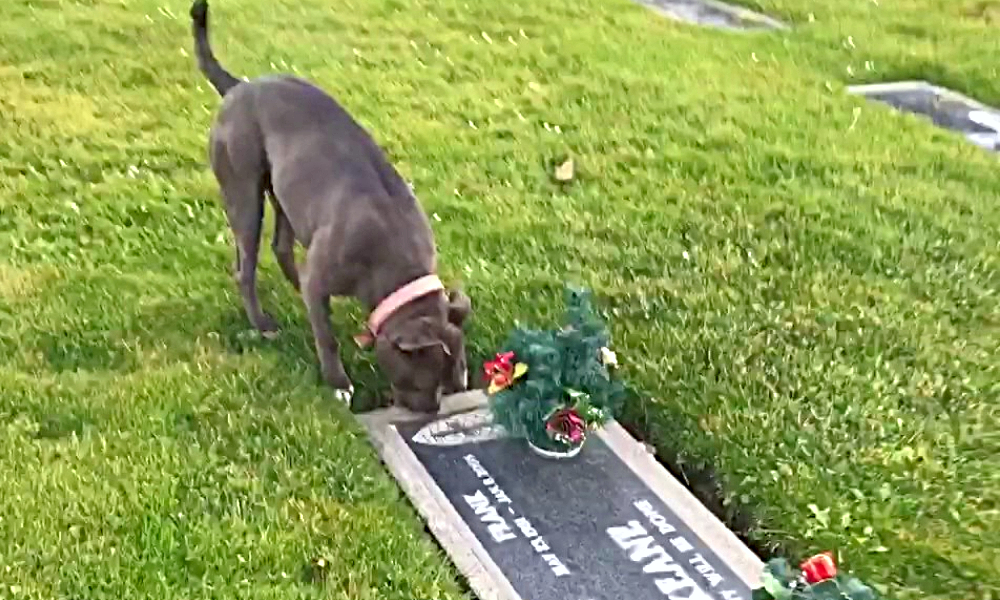 Michael and Ellen were visiting Gabe’s spot at the cemetery every week to help them mourn. Now that they had spent some time alone, they could bring their kids as well. Even the family dog came to pay his respects.

Their kids put down some of their favorite toys to give to Gabe. They promised him they’d come back next week but never expected what they’d see the next time they visited. 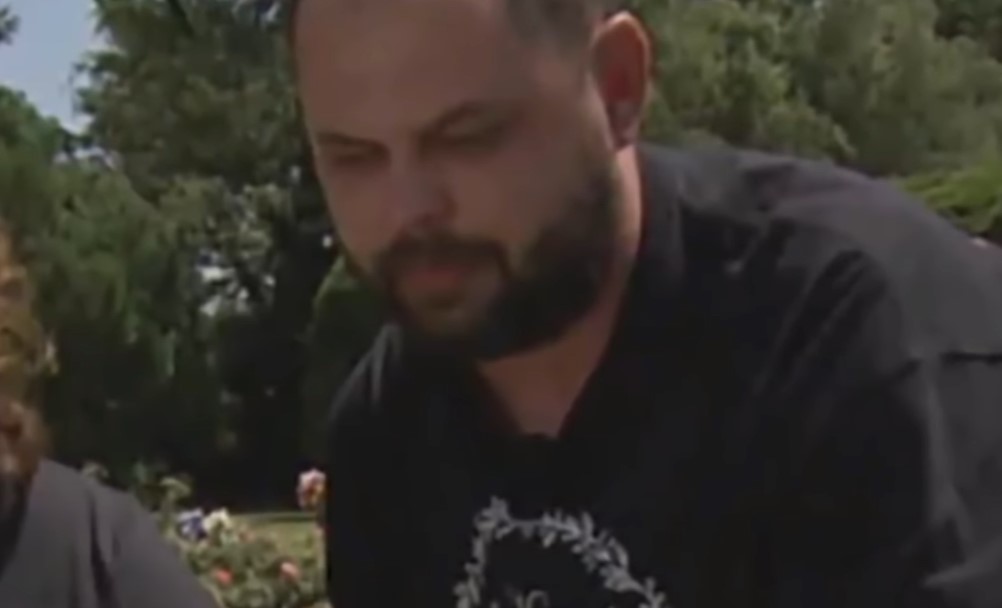 Ellen was met with a horrific sight, only one week ago, they had left dozens of gifts, but today, it wasn’t the same. All of the toys, the pinwheels, and prized toys, they had vanished.

Why were they gone, Ellen had no idea that someone would do this. She could feel her anger bubbling over, she needed to find out who had done this. 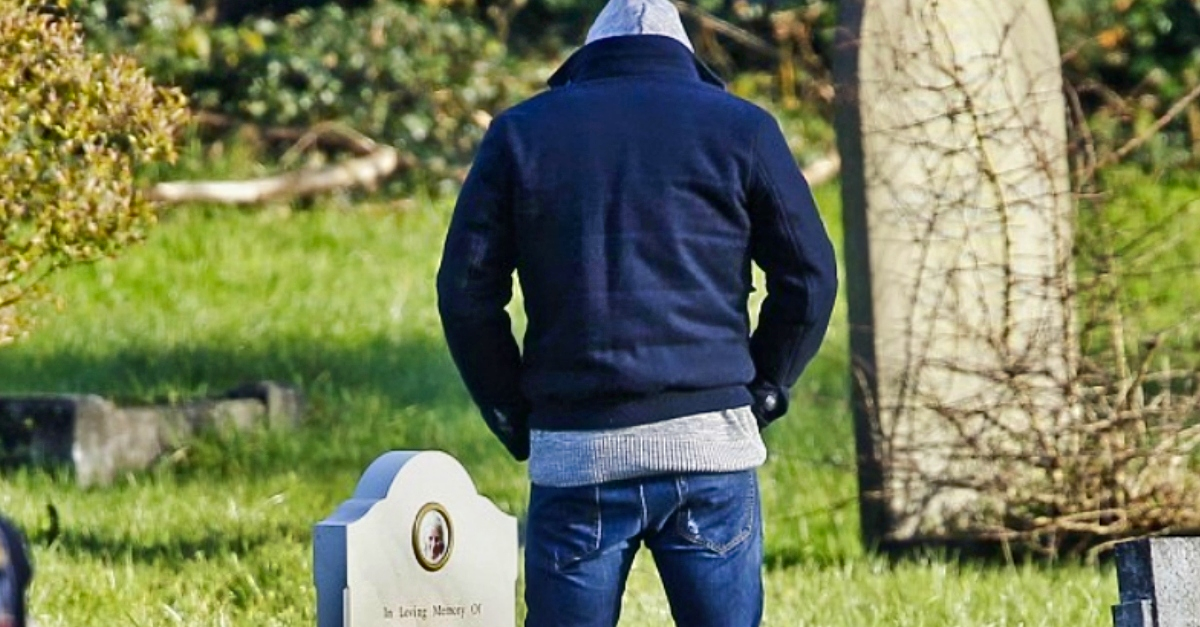 Michael assured Ellen that everything would be okay. They would do all they could to recover their son’s gifts. dozens of thoughts raced through his mind, maybe it was something like a raccoon? Maybe it wasn’t allowed for them to leave items at the cemetery? Whatever it was, Michael had to find out.

Among all of the explanations that were harmless, Michael also thought of a dozen that were much more sinister.

Was It Really True? He really hoped that one of the conclusions he came to wasn’t true. It twisted a stomach into a knot.

He thought that cemeteries had a general sanctity, who would take something from the graves? Take prized possessions that the loved ones of the lost had given them. 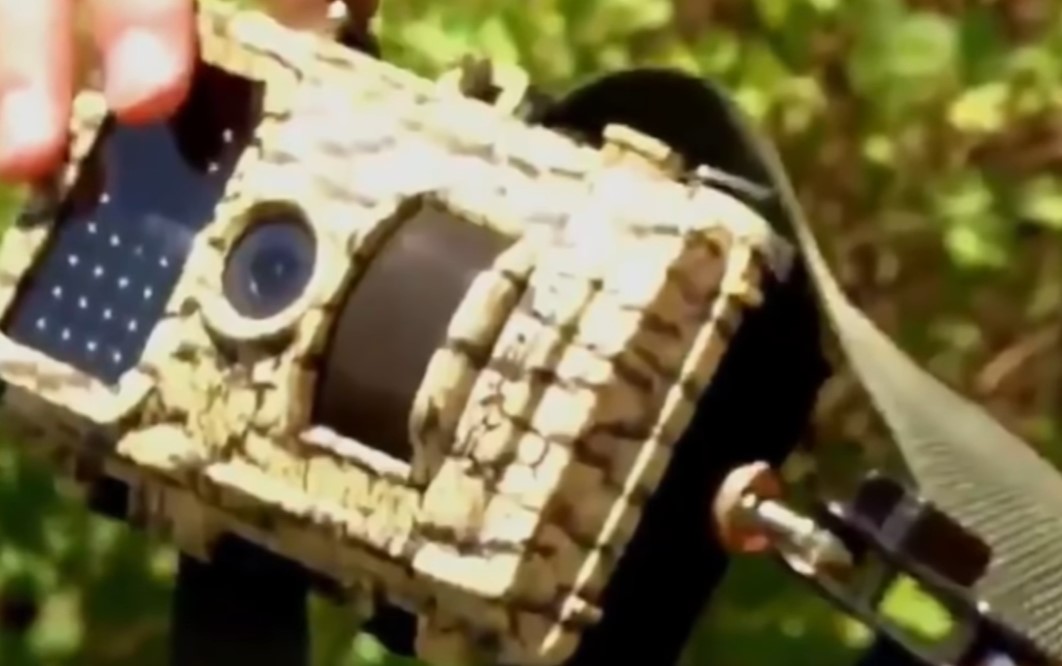 The cemetery didn’t have any security cameras, so Michael would have to leave his own setup to catch the graverobber.

But he didn’t want the thief, or someone else, to see his camera and steal that too. It would just be another loss for them and another win for the thief. Michael knew the only way to catch the culprit was to hatch an ingenious plan.

Setting The Camera Up 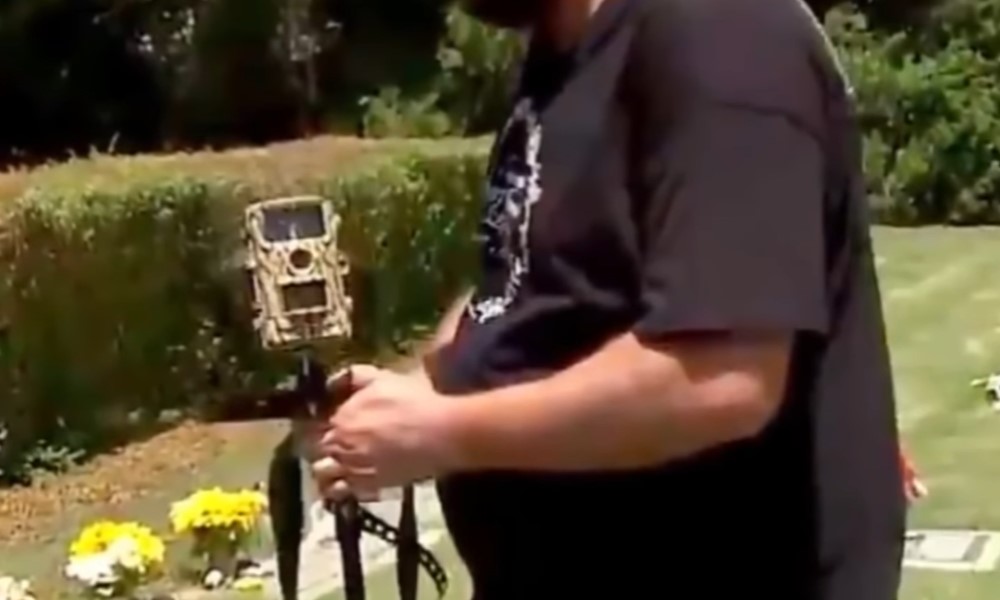 Michael got a small camera without any kind of light that would alert the thief. He painted it brown and hid it in the bushes so no one would notice it. Now he just had to wait.

But after waiting a week and reviewing the footage, Michael couldn’t believe what he was looking at. There was his son’s grave, and there was the culprit — the reason why the toys and flowers were missing. And it wasn’t what he had expected at all. Michael called for Ellen to look at the footage and confirm what he was looking at. She raced in, eager to find out what had happened to the gifts they’d left their son. But she wasn’t prepared for what she was about to see.

In the footage, the culprit is seen snuffling among the toys laid on Gabe’s grave. Then, the dog — obviously a stray — quietly takes them away one by one. Ellen’s heart broke at the sight. Was the dog living there on its own? They had to find out. 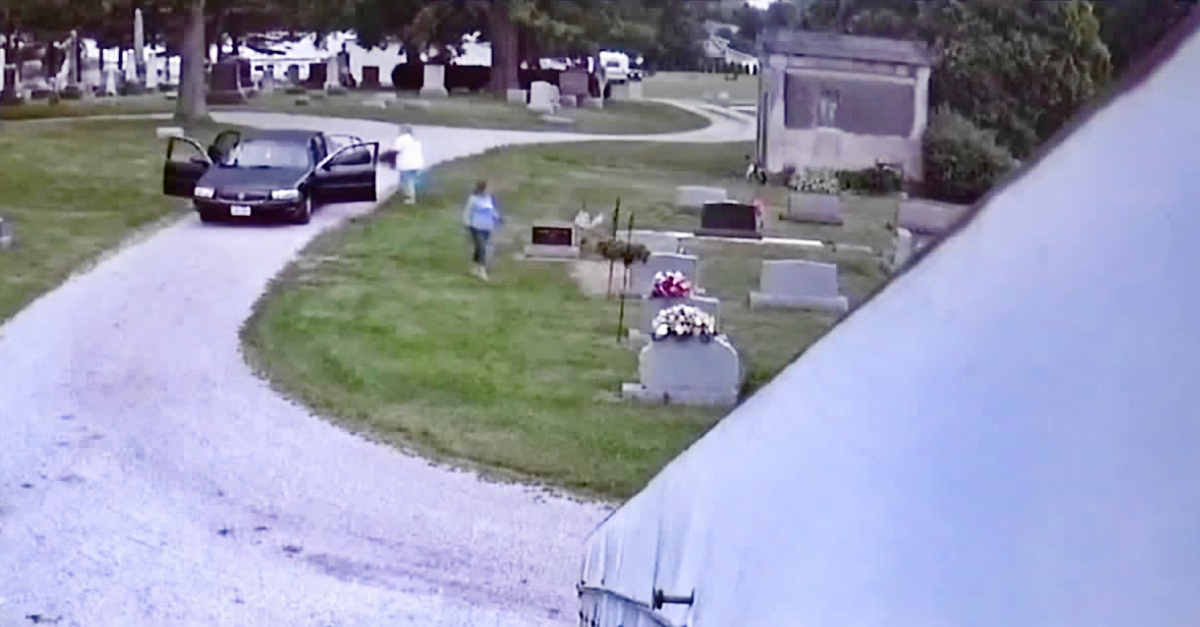 Michael and Ellen returned to the cemetery the next day, and sure enough, all the toys were gone. But there was no sign of the dog anywhere. With their anger over the missing toys forgotten, they were determined to find it and help if they could.

Ellen began to walk in a wide circle around Gabe’s grave. Suddenly, she heard a noise.

A Hole In The Ground 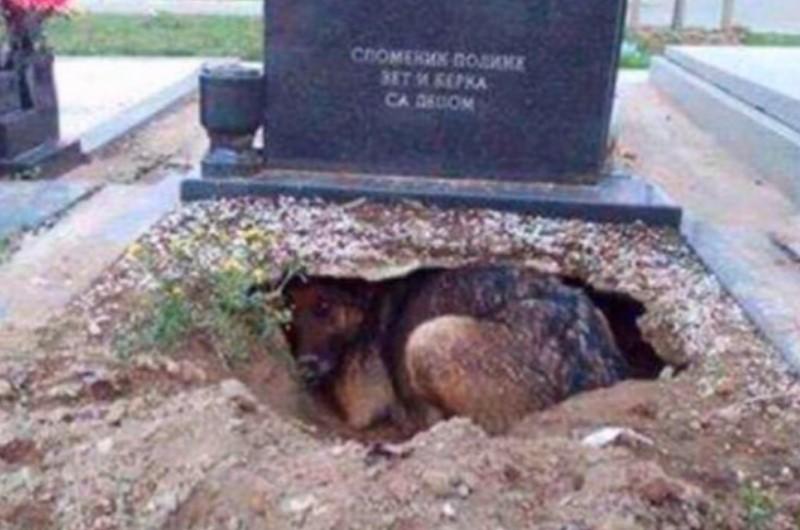 When she got close to where she thought the noise had come from, she didn’t really know what she was hoping to find. But as she made her way around the stones to an older part of the cemetery, she saw a massive hole under one of the gravestones.

From afar, the hole looked like it had been hollowed out but still had some brown sand inside. Until she got closer and realized that was not dirt. 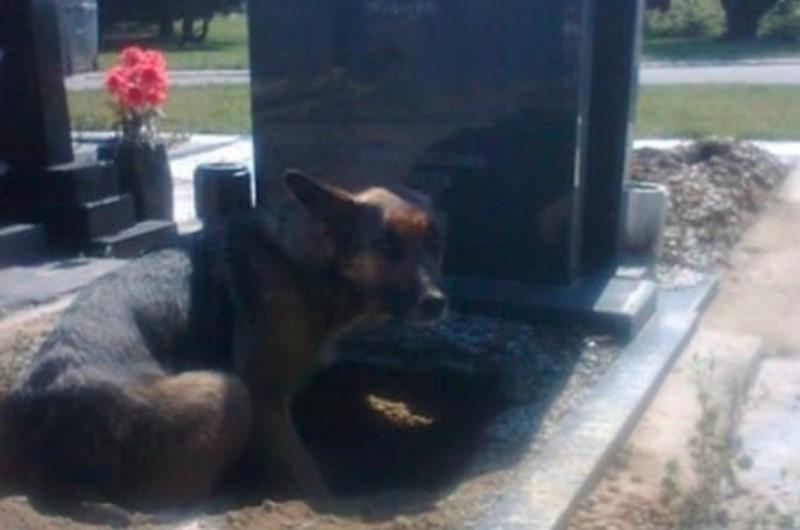 The dog was huddled under a pile of soil that it must have dug itself. The dog looked petrified when it saw Ellen and made itself even smaller by moving even deeper into the hole.

Ellen was stunned. What was a dog doing here? She knew it was not uncommon for dogs to mourn their owners, but this dog had made itself a den filled with Gabe’s toys. She called for Michael. 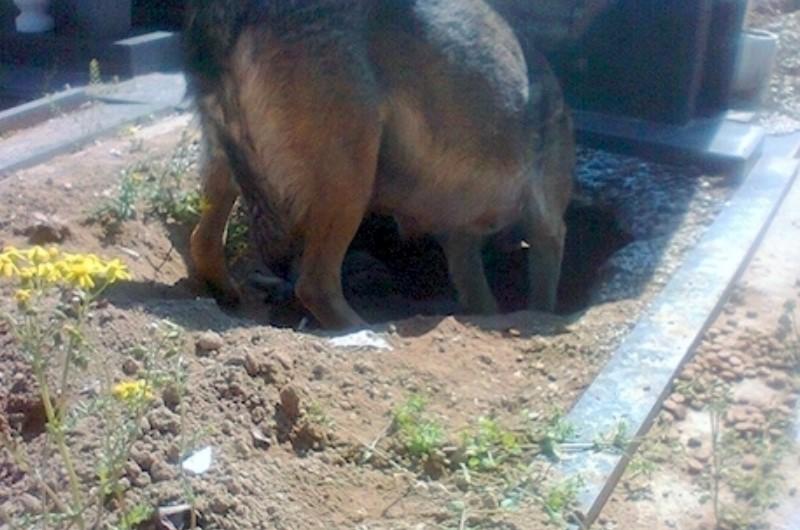 Ellen tried to make it come out of the hole by whistling and calling it, but it was clear that the dog was not going to move.

No one knew how long this poor dog had been there, or if it had had water or food. Was this dog that had been stealing Gabe’s mementos mourning its owner? After a long while, the dog seemed to be intrigued by Ellen’s soothing voice. It briefly came out of the hole to introduce itself.

But as soon as it came out, it doubled back and checked on something before going any further. What was this dog hiding? Soon, they would find out. 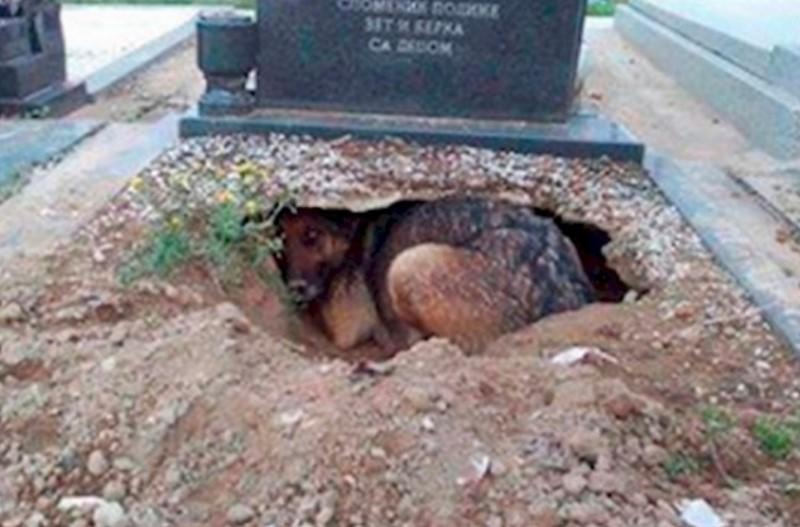 As the dog made way for Ellen and Michael to see what was inside the hole, they couldn’t believe her eyes. This dog was not mourning her owner but protecting her babies!

The stray momma had a little cave under the gravestone that she’d filled with toys and had her puppies in there! Ellen couldn’t believe what she was witnessing. This poor dog was just looking out for her babies and dug herself into somewhere she thought was safe. She had surrounded her puppies with comforting toys and flowers, so she must have been someone’s pet once.

Ellen and Michael knew they needed to help her, and they were prepared to do anything in their power to do just that.

She’d Made A Den “You can see the den [she] created and just how compact it was,” Ellen said in an interview. “While it wasn’t ideal, it was the best she could find.”

The pups were struggling for survival, so Michael got some dog food while Ellen waited with the dog and her pups. “The puppies were very frail and were lucky to have been found,” Ellen added. The puppies and their mom were ravenous. Ellen had no idea how long this canine family had been without food or water.

The mom dog was unafraid of Ellen now, and she even let her pet her. As soon as the pups smelled the food on the ground, most of them quickly wriggled toward it and wolfed it down. But some were more lively than others. Some of the little ones were too frail to even move. Ellen was now scared for them, she had to get help, so she got out her phone and called a center that she knew would be willing to help. The canine family had its own safe place with warm beds, fresh water and good food they could all nibble on. All of them received expert medical attention; they all were in good health but still needed a lot of food and rest before they could be put into the adoption program.

All the pups’ bellies were growing, and their fur was shining. If it was not for Ellen and Michael, who knows what would have happened to these babies. But what about all the toys the dog had stolen? Ellen, Michael, and their children picked out a few of the momentos that they wanted to return to Gabe’s grave, but they all decided to let the poor dog and her pups keep the rest.

The lonely momma dog was looking for some form of comfort and human connection, which she had found at Gabe’s resting place… just as the Wrights had.