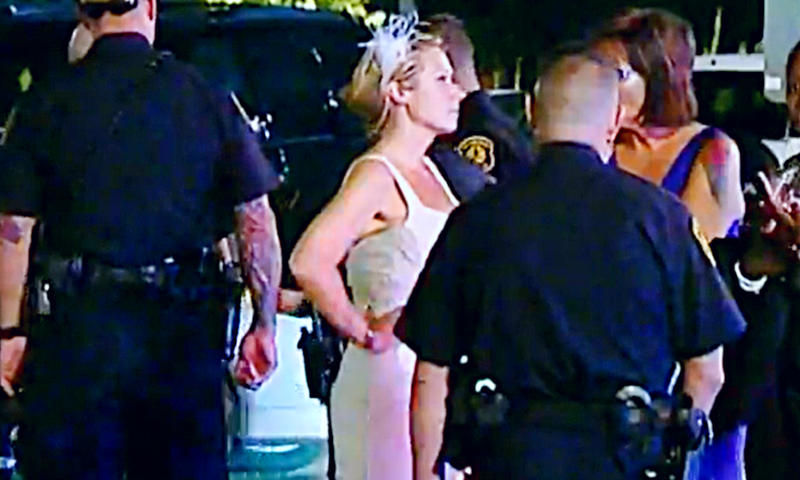 In this day and age, digital is what’s taking over. Weddings are becoming more extravagant by extension. A lot of people plan their weddings before they’ve even met the person they’ll marry.

With access to the internet, people search far and wide to find inspiring ideas on places like YouTube or Pinterest. This is where there are plenty of examples of decor and wedding dresses. Some wedding videos are very different from others though.

A Lot Of Planning For both the bride and the groom, the wedding day is very special. The bride wants a unique wedding like none other. Just the flowers and the colors of the wedding take weeks of deciding. Let’s not even mention the dresses for the bridesmaids or the wedding vows.

It’s an intense process that every bride wants to plan herself – right down to the finest detail. For one bride, that wasn’t good enough. She wanted more than any traditional wedding. 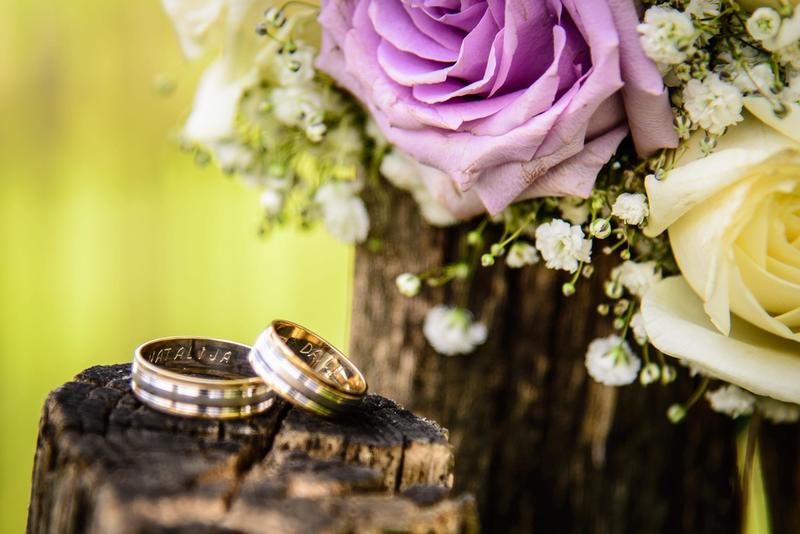 Cassandra was planning something very special for her wedding that her soon-to-be-husband didn’t know about. The couple lives in Florida, and the videographer they hired would capture the surprise many felt when Cassandra unveiled the surprise.

The video would be seen by people around the world as the video picked up traction. Then everyone saw what the bride had done. 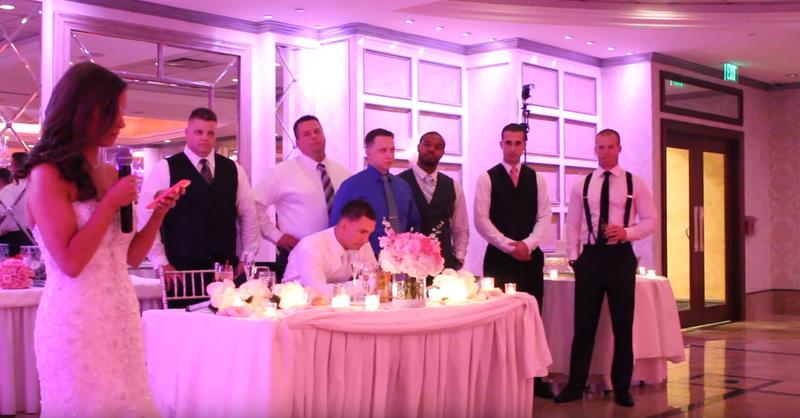 No wedding would be proper if there weren’t any wedding gifts. The gifts generally will help the couple start a home together. But these days more couples live together before getting married so the need for kitchen or home-related items had decreased significantly.

But regardless of who gets the gifts, whether it’s from the guests or more intimately from the bride to the groom – gifts are still tradition and need to be present for the perfect wedding. Cassandra was going to turn a few heads with the gift she had for her husband. 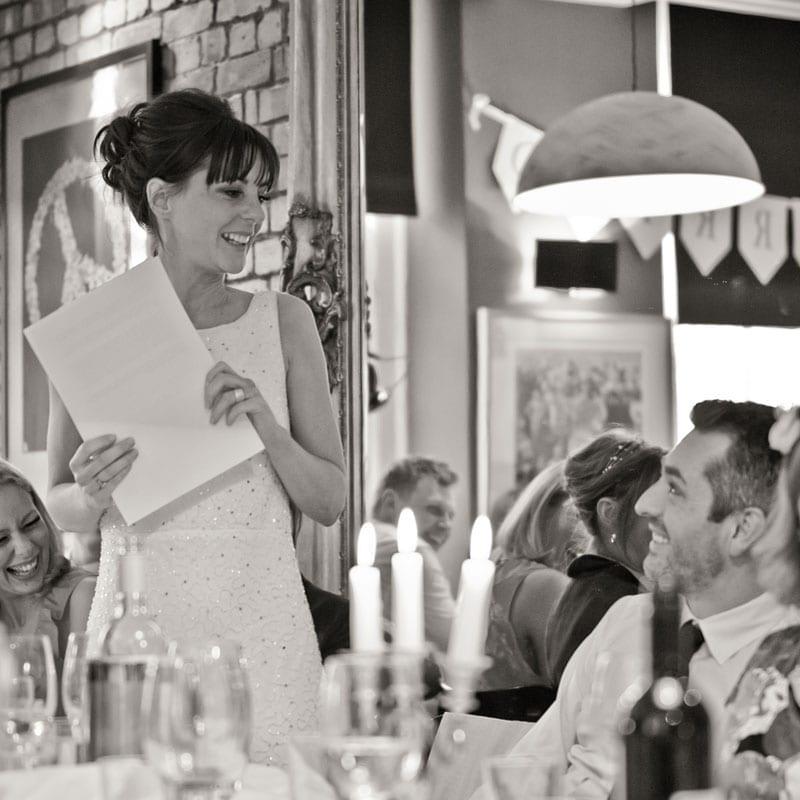 The couple getting married will also get each other something. It’s normally cute small presents like socks to keep one warm if they get “cold feet” or handkerchiefs for their tears of joy when the big moment arrives. Sometimes it’s even a letter of love.

Cassandra didn’t want to give her groom any of those. She had planned to do something a little different from the norm. She knew it was controversial. When the moment arrived, all attention was on her husband. Traditionally the bride at a wedding would never give a speech, that honor would fall on the best man and the father of the bride. Cassandra liked to break the norms though.

Now she was going to give a speech and no one could stop her, it was her wedding, right? After all that she had to say was said, her soon to be husband and all of their guests, and anyone watching on the internet felt their eyes widening in disbelief. 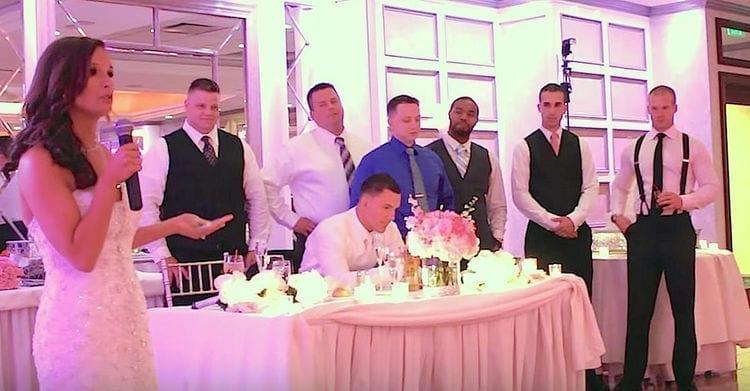 The wedding was going well when Cassandra suddenly got up and began rapping on her glass with a cake fork so the crowd would fall silent. Everyone there stared at her in confusion.

All their eyes were on Cassandra when a group of strange men walked in. They turned to watch them and didn’t know what to think. As the six burly men made their way behind the groom everyone was still silent. 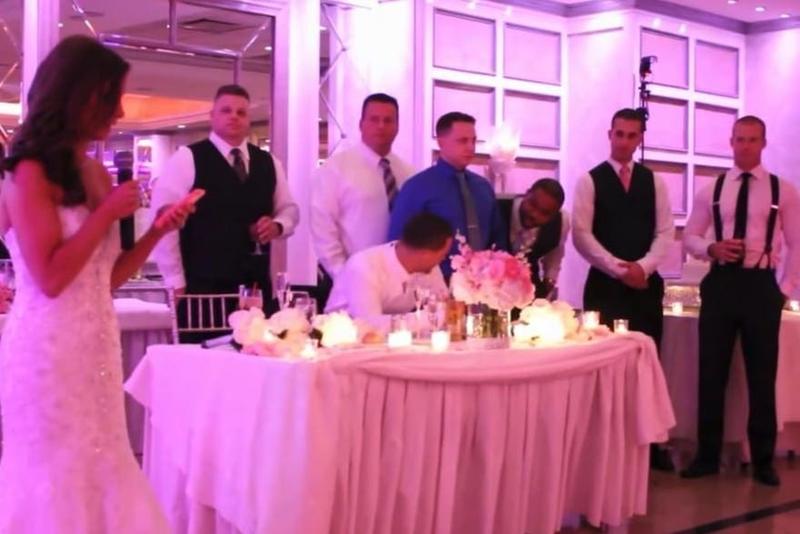 Nobody knew what was about to happen, not even the new guests that had arrived. Cassandra didn’t address who the men were but rather told everyone about a nice surprise she had planned.

She told all the guests that there was something for every single guest and they were hidden in the room. Everyone’s eyes widen as they got excited. 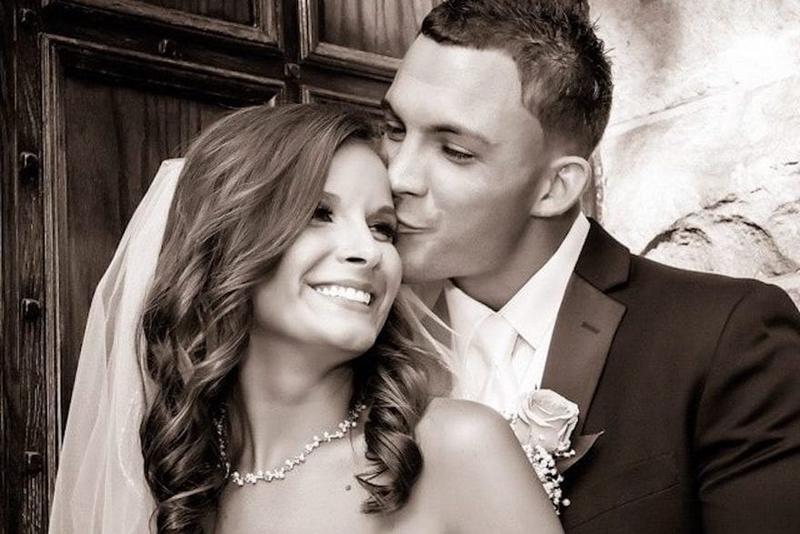 Cassandra told everyone it was time to search for their gifts. All the guests stormed across the room searching frantically. The looked in the bouquets and even under all the tables. They lifted up statues and decorations in their desperation.

It’s not unheard of for the couple to give the guests a gift to remember the occasion. It could be a candle or a glass with the couple’s names engraved on the bottom. The guests were expecting these things at least. 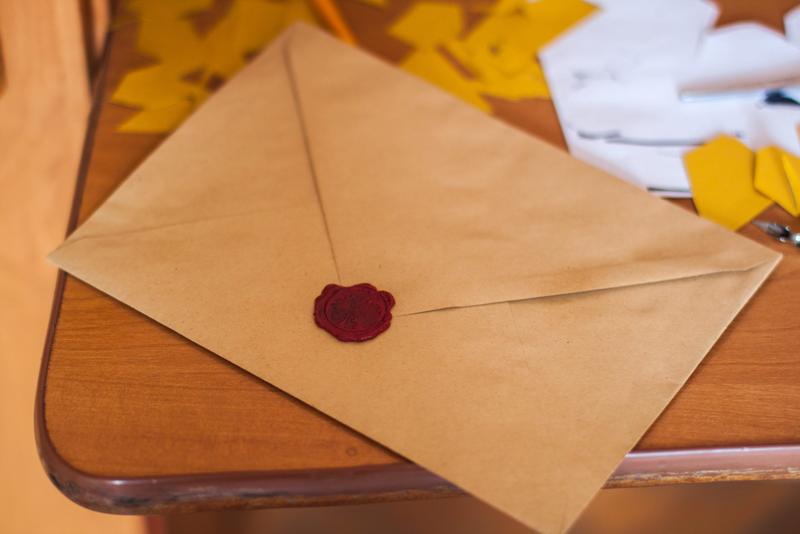 What was inside the envelopes? The bride finally broke the silence by saying that everyone could open the envelopes. The excitement that the crowd then turned to bewilderment. The guest’s eyes widened as they ripped open the envelopes and looked inside. Inside every envelope was a $3 Dunkin’ Donuts voucher — enough to buy one treat.

But why was the bride giving out Dunkin’ Donuts vouchers? After such a buildup of excitement, they found themselves feeling quite underwhelmed. And what was the relevance of this random offering from the bride? Even the groom didn’t know what to make of it. 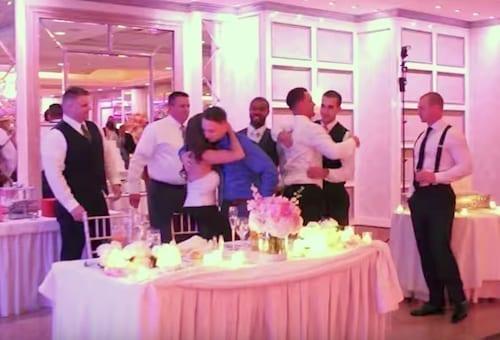 Then, Cassandra asked for everyone’s attention again. A sea of confused faces looked back up at her as she began to explain herself. You see, the vouchers were not intended to be for the guests in attendance. Murmurs of surprise rose up from the room.

All the guests wanted to know who the vouchers were for. They all felt that the more the bride revealed, the more confused they were! Then, Cassandra explained that the gifts were relevant to the six men she had called into the room. In their excitement, the guests had completely forgotten about them! The bride went on to explain that the vouchers were for someone that they all know, but also may not have met yet. What was going on?

She introduced the men as brothers in arms to her husband – fellow police officers who served alongside her husband on the local police force. A little bit of recognition rippled through the crowd, but still, they were puzzled about why the bride had insisted on getting them up during her speech. She went on to describe the men – courageous, selfless, thoughtful, strong and kind. However, this was not always the way they were treated. So often there is a lack of respect paid to the police force and the public’s treatment of them is unfair, according to the bride.

She explained the sacrifice that her husband and his team make every day – risking their lives, leaving their families to report for duty, never really having time off like most of the guests do.

What Did It Mean? The policemen stood a little shyly, unused to such high praise and being the center of attention. The rest of the audience was also feeling a little awkward, thinking about what the bride was saying and asking themselves if they too were guilty of the lack of respect that she was describing.

They were also, rather understandably, still curious about the situation and wondering what the vouchers were about. What did they have to do with the police officers? All was about to be revealed.

Playing To The Stereotype 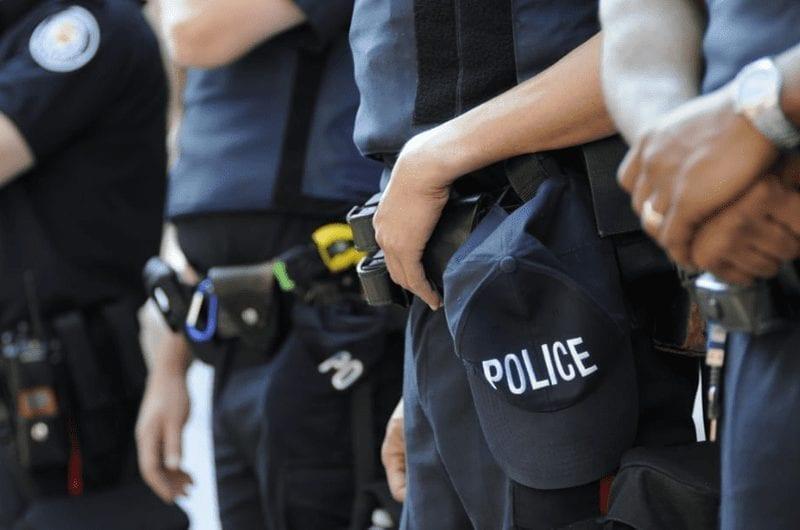 There’s a common notion about police officers: they love donuts and coffee. This cliche has been perpetuated in many films and TV shows — even the animated show The Simpsons portrays policemen in this way.

The bride was well-aware of this and cleverly decided to play on the stereotype. Each voucher would purchase one hot coffee and a donut. But, instead of using them themselves, she had another plan up her sleeve. The bride addressed the confused crowd, pressing them to keep the vouchers and pass them on to the next police officer they came across. The gesture was meant to show respect and gratitude. Cassandra explained that, although the vouchers were just a small token, the small act of kindness could go a long way.

She hoped that they would make some police officers smile and feel as though they are appreciated. But Cassandra’s gifts actually meant so much more. To Ryan, Cassandra’s dumbstruck groom, the gesture meant so much more. He was touched that she had planned out such a unique and heartfelt way of telling him that she respected and supported his choice to become a police officer. And, not only that, her gesture had extended to his fellow officers as well.

He quickly became emotional and tearfully thanked his wife for what she had done — it was the best gift he had ever received. The six officers gave the bride a warm hug to show how touched they were, too. Ryan felt as if his gift to his wife would never live up to the amazing gesture Cassandra had planned so carefully — and, honestly, he’d be forgiven for thinking so! However, he had a speech of his own for his wife.

He promised to continue to serve his country, and he promised to do everything in his power to make his wife happy. With her love and support, he knew that they could weather any storm. Of course, the entire wedding was recorded by the couple’s videographer and even by some of the guests. Soon, the footage was uploaded online for the world to see. It was also a way to share the day’s magical events with those who had not attended the ceremony.

But, nobody anticipated just how far it would spread. The video exploded on social media and went viral, garnering over 180,000 views! But how did viewers react to the touching video? The comments continued to pour in. Civilians, police officers, and their families all showed their support and gratitude. One of the many viewers was the wife of a police officer. The video was shared far and wide, and it inspired hundreds of people. People were so touched by Cassandra’s tribute to police officers that they decided to spread some love of their own. It’s incredible to think that one bride’s wedding video touched the hearts of thousands of people worldwide.

The video also happened to come at a time when tensions between the police force and civilians were especially high — making its message doubly important. Cassandra had thought long and hard about the perfect gift to give her husband. But instead of settling on a token gift like a watch or hipflask, she decided to make a grand gesture to show her love.

Rather than giving her wedding guests a meaningless gift that would quickly be forgotten about, Cassandra had decided to give them something that they would remember forever. Hopefully, this story inspires many people to remember those who are so easy to forget about while we get on with our comfortable lives — the men and women who put their lives on the line every day to serve and protect their country and the people living in it. Next time you see a police officer, a thank-you will go a long way!

Another lesson to learn from Cassandra and Ryan’s wedding video is that the best gift you can give your loved one is showing your support and appreciation for what they do.