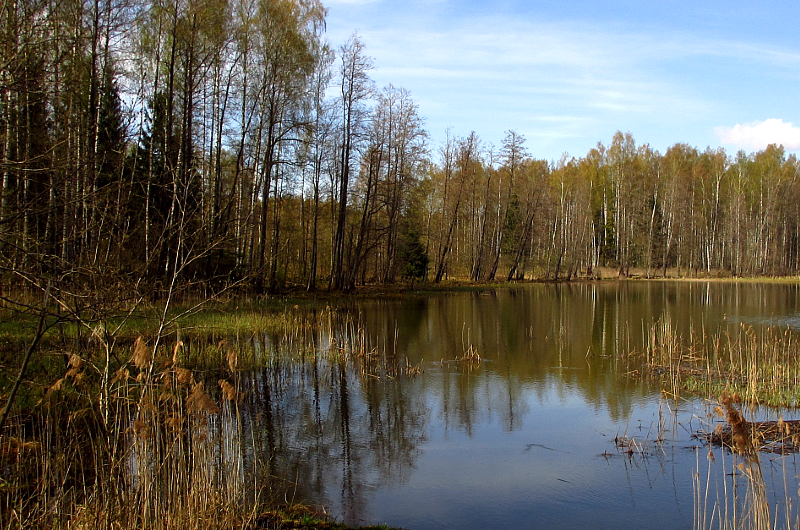 A loud screech echoed through the forest as metal fought against metal.

The door finally gave up its battle and fell open, revealing the long-forgotten contents. It was the moment the entire crowd had been waiting for. But as one excited boy tried to jump onto the amazing discovery, his mother noticed something … and screamed for him to get away.

He wanted the other one – the one grown over and filled with mystery. Today was the day to explore the Estonian swamps. The area smelled sweet and acidic from the towering pine trees. It wasn’t long until Kurtna Matasjarv came into view.

Things seemed find at first. The squishy perimeter was what you would expect from any lake.

But as he wandered along the rippling waters, he noticed some strange marking in the fern-covered earth. It wasn’t like anything he had seen before during his explorations. Then, something else caught his eye.

What was a rope doing here? There was no boat nearby.

His young mind raced with possibilities as he scraped away the mud and tried to pull it. But when it wouldn’t budge, he knew he had to bring in reinforcements. The first adults on-scene were his confused parents. However, it didn’t take long for the village to get word and even more people come out to see what was going on.

The men congregated around the rope, each taking turns pulling it.

Lengths of mud gave way, but when they reached the waterline, it wouldn’t budge. Every man in the crowd grabbed part of the rope and they pulled with all their might, like some dirty sword of Camelot.

The stubborn rope refused to cooperate.

Whatever was below the murky waters must have been heavy! As the men stood back, muddy and defeated, they begrudgingly admitted there was nothing they could do. There was no choice but to call in the authorities.

The loud rumble of an enormous bulldozer competed with the loud chatter of the entire village.

This wasn’t a simple salvage operation anymore. It was the most excitement their little town had seen in forever and no one wanted to  miss a moment. But when the massive machine took its turn, they couldn’t believe their eyes.

Many Hands And Hours

Everyone raced home to gather whatever ropes, chains, or cables they could get their hands on. Not only that, but every available heavy truck came over to add some horsepower to the project. It had been over 8 hours, but everyone was desperate to solve the mystery. No one would go home.

It was a long line of chains, machines, and muscle.

Everyone heaved with every fibre of their body. Grunts and strained yells filled the air as something rusty rose to the water’s surface. People raced in with shoves and buckets to haul away the competing mud.

Evening had set in, and the last rays of light disappeared below the treeline.

Slowly, the massive algae-covered monster rose from the darkness and spit out brown water. The work wasn’t done yet, but the hours of toiling had finally given them an answer to all their burning questions. It started with a metal hatch.

It had been hours since they had partially hauled the massive metal thing out of the muddy water.

Even while their energy sapped away, the men wiped the sweat from their brows and continued to wipe away the layers of mud, revealing an eerily-familiar white symbol. With their intrigue driving them on, they had come this far. Now, they readied themselves for the final haul.

With one last mighty pull, it was finally out.

Everyone fell silent as they watched the metal behemoth roll out the lake, squelching and fighting against the heavy mud and streaming torrents of water over the villagers. None of them could quite believe the piece of history they had resurrected… but what was a war tank doing here?

That was the question on everyone’s mind.

What was a WWII war machine doing in a lake in the Estonian swamp… in the middle of nowhere? Kaspar sprinted up to look inside. This was a once in a lifetime event and he would not miss it. Through the water, he saw something shiny. “Mom? Are those big bullets?”

Kaspar felt strong arms pulling him off and dragging him away. “Get away from that!” his mom yelled.

There was still ammunition rolling around in the cabin. The tank was in amazing condition … so there was a chance the shells could still be dangerous. It wasn’t long until they heard the wailing of sirens.

A camouflaged truck and men in combat gear rushed out of the armored vehicles and towards the mud-caked tank.

Someone must have called the authorities as soon as they saw what was inside. Everyone stood still and dead quiet, wondering if they were in trouble. One officer came up to Kaspar and asked him a pointed question.

“You found it?” the large man asked.

The boy gave a small, scared nod. The man smiled. “I’m impressed. Well done.” The soldier looked around at the villagers and said, “We need you to step back while we make sure it’s safe.” And, between the army and internet research, the answers to the mystery finally emerged.

It took two weeks and every available hand to bring the tank completely out of the lake.

The team managed to haul the gigantic machine far up the bank enough so people could go around and take a closer look. Many took photos of and with the major historical find. But how had a Russian-built tank with German markings ended up there?

Experts confirmed that it was indeed a war machine — a Soviet-built T34/76A, to be precise.

This 7-metric-ton vehicle was the prime element in the Soviet army in their battle against the Germans. Aside from being underwater for an astounding 56 years, they discovered another amazing detail about the symbols and numbers painted on its side.

This particular tank was thought to have been captured by the enemy and repainted with their own symbols.

Even though it was a capable machine that could navigate all kinds of environments, the main theory is that the Germans dumped it so it couldn’t be retaken. The next astounding discovery took place in the Gorodenko museum.

Another curious detail about the tank was that it didn’t seem to have any damage at all.

While some of the metal on the surface had eroded slightly from decades of being underwater, the Russian war machine appeared to still be in good condition. In fact, it was so intact and looked so very solid that they couldn’t help but hope that it still worked.

Experts revealed that the pristine condition that the tank was found in was thanks to the low oxygen levels in the marshy bog area that became its watery grave.

These conditions helped to preserve the metal while minimizing any corrosion. Everything was still intact — as if the metallic beast had been sunk a year ago. But was it still operational?

During the restoration, curators were amazed when they found that they were able to start the old diesel engine without needing any spare parts at all.

They also recovered a total of 116 pieces of ammunition. And experts were even able to answer the burning question of why the tank was located in that particular area.

The Eastern Estonia Narva front was the location of some intense battles.

Around 100,000 soldiers perished and more than 300,000 were wounded. The fighting forces migrated and endless tanks and soldiers poured into the narrow, swampy area. The finale of the battle took place on August 3. Huge quantities of Soviet armor and artillery attacked the German positions, but until August 10 not much had changed.

It was in the summer of 1944 that German troops, during the Battle of the Blue Mountains, captured the Soviet ‘Trophy Tank’.

What makes this find extremely rare is that this tank had to fight for both the Russian and German sides during WWII. However, it was sent to its watery grave just six weeks later.

On September 19, 1944, the Germans began to retreat along the Narva front line — and deliberately dumped the tank.

The German army wasn’t willing to submit anything and destroyed what they couldn’t use. The old T-34 is now on display for everyone to see at a war museum in the Gorodenko village — a priceless artifact that had been found by a curious little boy.