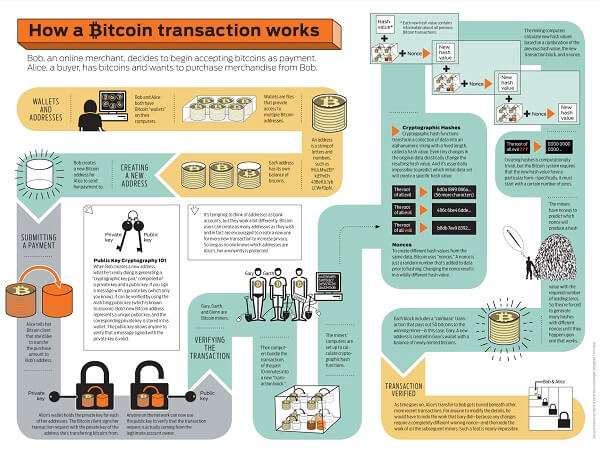 Twenty five years ago if you wanted to send someone information from far away you had to put that information in an envelope, and send it with a stamp to prove postage was paid. A few days later the envelope would arrive in the mail of the recipient and if you wanted a response, you would include a return address and probably a stamped envelope. Perhaps a few weeks later you’d receive a reply.

Money As A Digital Medium

This is the information analog to Bitcoin as a currency. Currently, we are monetarily where we were 25 years ago with regards to information. If you want to send a dollar to someone in China, it is almost impossible. If you want to send them $50 it can be done, but with expense and will take weeks to verify. That is unless you use digital currency, like Bitcoin. What Bitcoin does is bypass normal intermediaries like banks, governments and accountants and allows money to be transferred without friction.

Even though Bitcoin is much more than money, in order to understand Bitcoin we must first look at it as money and examine what money is. I know most of us think we know what money is, but if you ask people to define it, most will give you examples, anecdotes accompanied with a series of stammers but no real definition.

Money is simply an agreement of value which facilitates trade. It was always designed as a way of keeping track of exchanges. When parties want to exchange goods and services, they must agree on the value of their exchange and money provides this agreement and allows for the accounting of the transaction. Money has been many things throughout history, from beets, to broken sticks to gold and recently EMV card technology. It’s not the medium that matters. What matters is how it facilitates commerce. 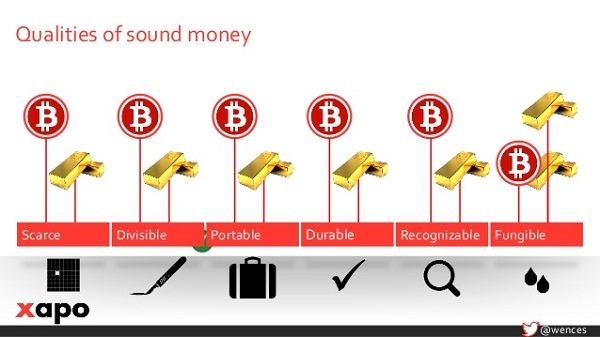 It’s also necessary to dispel some myths that hinder our understanding of money. Myth: money is backed. Money is not backed and hasn’t ever been. It’s a ledger. Even the gold standard doesn’t count because the gold backed the dollar, but what backed the gold? It’s a shiny rock and back then it didn’t even have value in technology.

Gold does possess the qualities of money, but beyond that, it is money because we all agree it is. Additionally, Gold cost billions of dollars to dig out of the ground and then we lock it in vaults underground after it is mined. So its value is in perception. Gold was also used because it meets the 5 requirements of money really well.

Bitcoin rivals gold as a form of currency with regards to the above qualities in that the issuance is scarce, it will only ever have 21 million Bitcoin issues. And those Bitcoin are distributed incrementally as the network is developed instead of all at once. The total amount of Bitcoin will be mined by about 2040. Bitcoin is divisible to 1 Satoshi or 0.00000001 of a Bitcoin.

It is superior as a portable currency, in that you can hold Bitcoin in a digital wallet and carry them in your phone, whereas any significant amount of gold would be heavy and unsecure. They are recognizable by being accepted more and more widely while the networks conducts millions of transactions. And it is fungible in that it can be exchanged for other currencies like dollars or pounds.

The technology behind Bitcoin is the real transformative component. This is called the blockchain. The blockchain is a network of miners who verify transactions and for that they are rewarded by receiving potential Bitcoin. The miners maintain an open ledger of all transactions between anonymous participants that can be seen by anyone. It works by is allowing anonymous parties to who don’t trust each other to transact with confidence.

Normally when two anonymous parties transact a trusted third party acts as intermediary for the transaction, facilitating trust. This often comes in the form of a bank or a government. When you make that online purchase, the bank that backs your credit cards also insures the validity of your purchase. Through the blockchain, millions of miners verify the transaction by consensus. It’s as if millions of notaries verified each transaction. When no consensus is reached, the transaction is nullified.

In order for the blockchain to work, the identities of those on the network are encrypted. This is done through very complex mathematics that create encryption keys for buyers, sellers and miners on the network. A Bitcoin is basically a private key that is half of a digital signature. The other half is a public key. A record of the public key is stored on the blockchain. When you want to purchase something with Bitcoin, you broadcast a request. The request is received by all of the computers on the peer to peer network. The request gets sent by the miners through a set of calculations called hash functions.

This sets off a competition among all of the miners to solve a complex cryptographic math function. Once solved, the miner who solved it tacks it onto the blockchain then broadcasts it to their peers, and checks the work which all changes the blockchain. Then, they begin using the new version of the blockchain. Because the blockchain is always changing, this also makes it impossible to hack.

Advantages and Disadvantages of Using Bitcoin

When I first heard of Bitcoin I was under the impression that it was a black market currency. Ultimately I realized that just meant it was a digital form of cash and that Bitcoin had no particular nefarious association. Northeastern University has listed some pros and cons of cryptocurrency. Most of the cons surround a lack of trust because it is a new idea. But the advantages are numerous and substantial, indicating it will continue to catch on. The most obvious advantages are how it removes friction and its cost from transactions. Similarly to how email made correspondence frictionless, Bitcoin removes the cumbersome middlemen who slow down and add cost to commerce.

Bitcoin is a revolutionary technology that will show the value of blockchains and transform the way we exchange money. The blockchain behind the Bitcoin is revolutionizing the way we interact and while it’s impossible to see all of the implications, it’s not hard to see that this will likely have a major impact on our world.