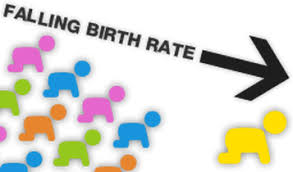 In our society, when modernization, technology, and consumerism have taken over many of our lives, having a child is not a main priority. Other Options for Birth Control

Women are having babies later in life and waiting longer because of the lifestyle changes of women in our time.  Contraception is very popular because it is so available, and it is being used as an option to postpone pregnancy at a later date. Contraception for women is no longer just the birth control pill, but other options are available. Cost of Having a Child

The expense of having a child is exorbitant, and the inconvenience of having a child is not very popular because they are difficult to fit into the lives of a modern couple. A 2015 PEW Research survey, found that 48 percent of Americans felt two children or fewer is the perfect size for a family.  Children are expensive (as of 2015, the average cost of raising a child in the United States was more than $233,000, according to The Conversation) and in 2019 there is still no federal paid maternity leave in the United States. So, if you want a child, you are on your own with expenses and the care for yourself and a child. Maternity Leave in Other Countries

Having a baby is second place compared to keeping and maintaining a job.  Paid maternity leave is not common because production is very important in our society compared to providing a human right in caring for a child. Other countries have advanced in our modern world, and they provide leave for men and women. In some countries, paternity leave and a yearly salary is available for up to sixteen months-Sweden. Also, maternity leave for a woman in some Scandinavian countries offers paid leave for up to two years. Having a child is a part of life, but life has become more busy and expensive, trading in pregnancy for a career.  The fertility rate is dropping more than it ever has in history because of the age increase of women deciding to have a baby later. The rate of births dropping is not positive because the workforce is declining.  Once everyone retires, there will be a decrease in employees. This may be a problem in the future.