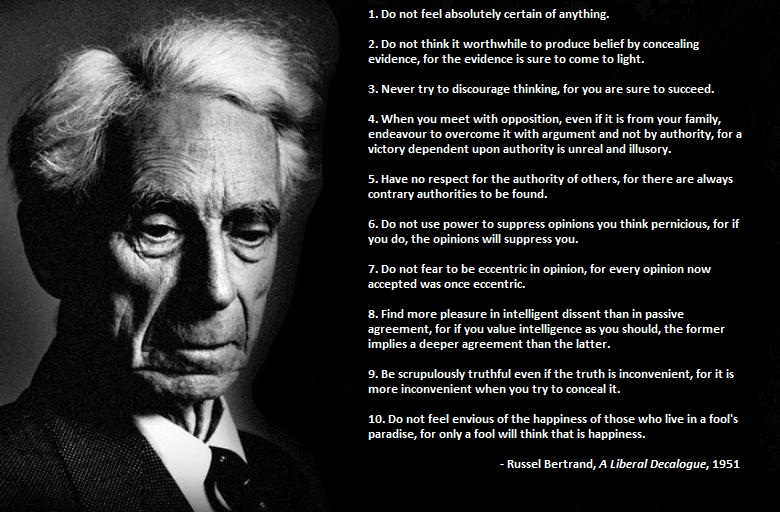 Bertrand Russell’s “Liberal Decalogue” first appeared at the end of the article “The best answer to fanaticism: Liberalism” with the subtitle: “Its calm search for truth, viewed as dangerous in many places, remains the hope of humanity.” in the New York Times Magazine (16/December/1951). It was then included in The Autobiography of Bertrand Russell, Vol. 3, 1944-1967.

In the article, Russell writes that “Liberalism is not so much a creed as a disposition. It is, indeed, opposed to creeds.” He continues:

But the liberal attitude does not say that you should oppose authority. It says only that you should be free to oppose authority, which is quite a different thing. The essence of the liberal outlook in the intellectual sphere is a belief that unbiased discussion is a useful thing and that men should be free to question anything if they can support their questioning by solid arguments. The opposite view, which is maintained by those who cannot be called liberals, is that the truth is already known, and that to question it is necessarily subversive.

It shows the usual sharp mind and tongue of Bertrand Russell, never more at ease as when presenting his unconventional ideas.

“The Ten Commandments that, as a teacher, I should wish to promulgate, might be set forth as follows: