Working at a bar when you are young is great fun. You get to experience the nightlife while making some extra cash. But not everything about the party scene is good fun and sometimes, especially for women, rowdy and unruly customers can cause more than upset.

In fact, it can get downright dangerous. She was completely prepared for anything an intoxicated person could throw at her, as he soon found out. 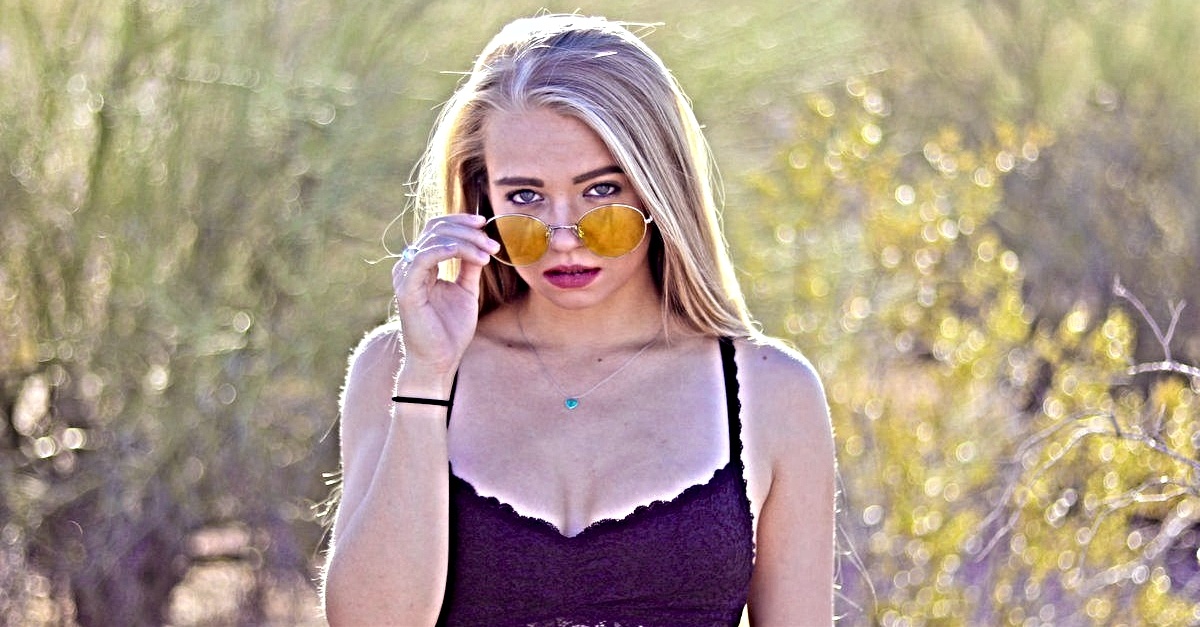 Krystal Olsen had worked in the customer service industry for as long as she could remember. She was great with people and a skillful social butterfly, making the most out of large crowds of strangers by treating them all to great service and a great time, whatever event they happened to be celebrating.

This is not a job for the introverted or shy. Standing up for yourself is of paramount importance, as Krystal would soon find out.

In this day and age, as we become more PC about the words we use and the actions we take this is not a story that should surprise us, and in a completely different way, it should have alarm bells ringing too.

Some people simply haven’t changed with the times, either because they aren’t willing to or because they don’t believe they have to. Krystal showed one man that he absolutely has to change his ways or face the consequences. 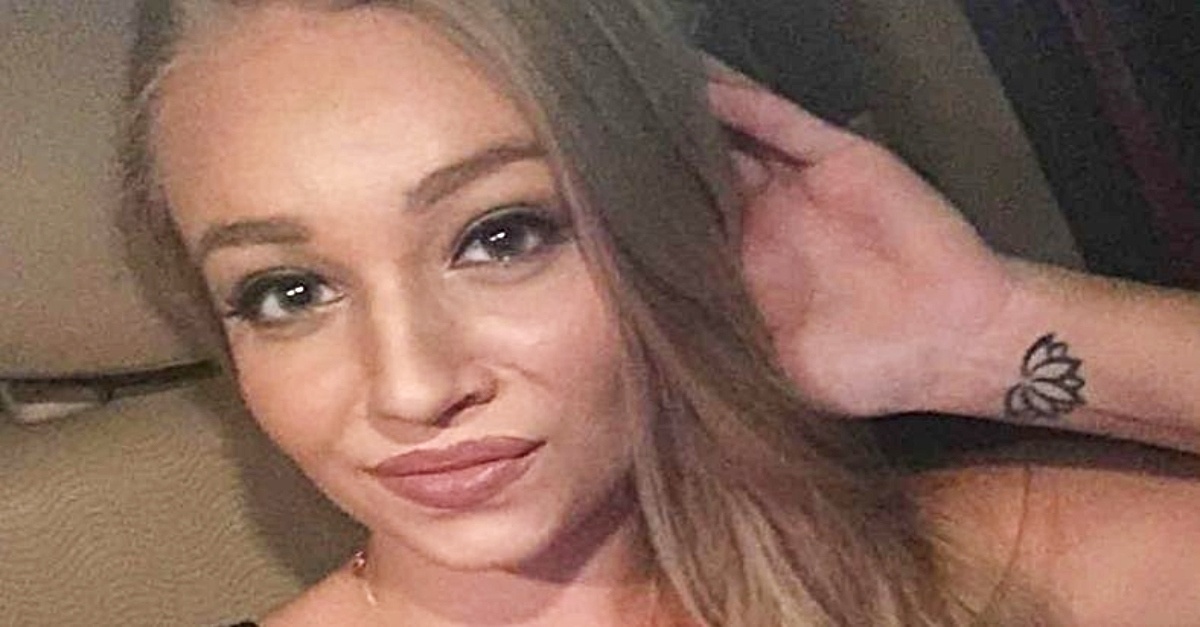 It was a weekend night and loads of young adults were letting off steam at the bar where Krystal and her team worked. It was a vibey place and everyone was in a relaxed mood, some clearly too relaxed… with their manners.

Still, customers came and went and Krystal made sure that they were all attended to promptly and efficiently. One table, however, seemed to be entrenched in their celebrations for longer than the others. 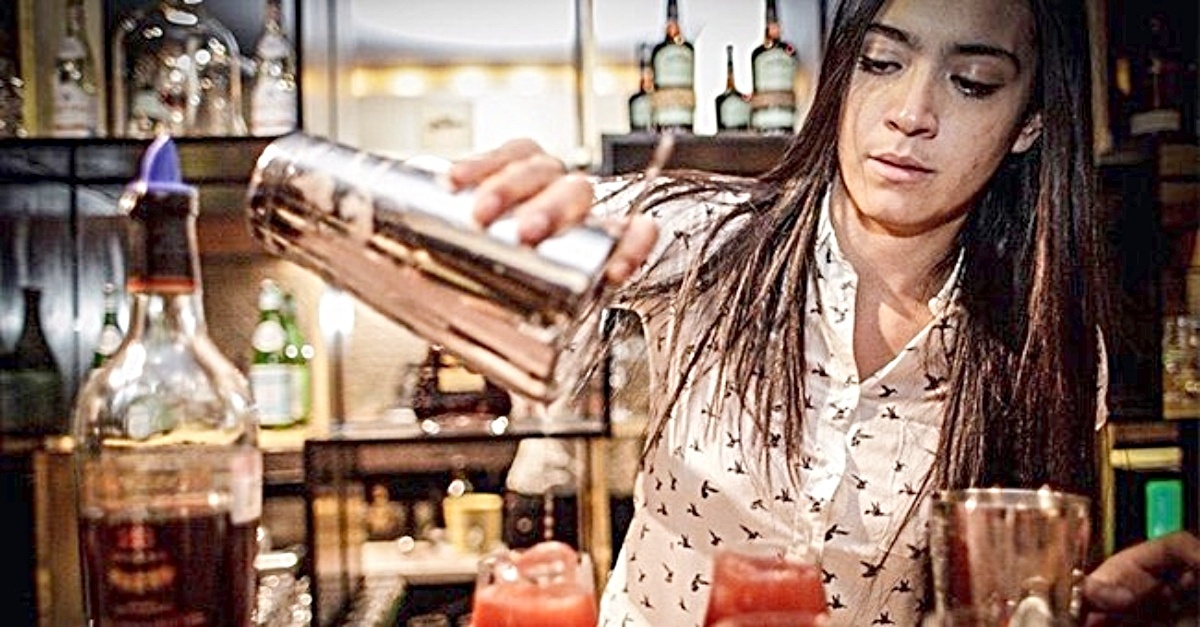 The group of young men had been sitting and ordering drinks from early in the evening and they were still there many hours and even more drinks later. It had become a booze-fuelled event and the men were becoming rowdy and getting louder.

She had been diligently serving the drunken party drinks all evening, which was obviously an alcohol-fueled weekend for them. One particular member of the men decided to reach up her skirt and grab her behind. Clearly being an act of assault, it left Olsen understandably fuming. 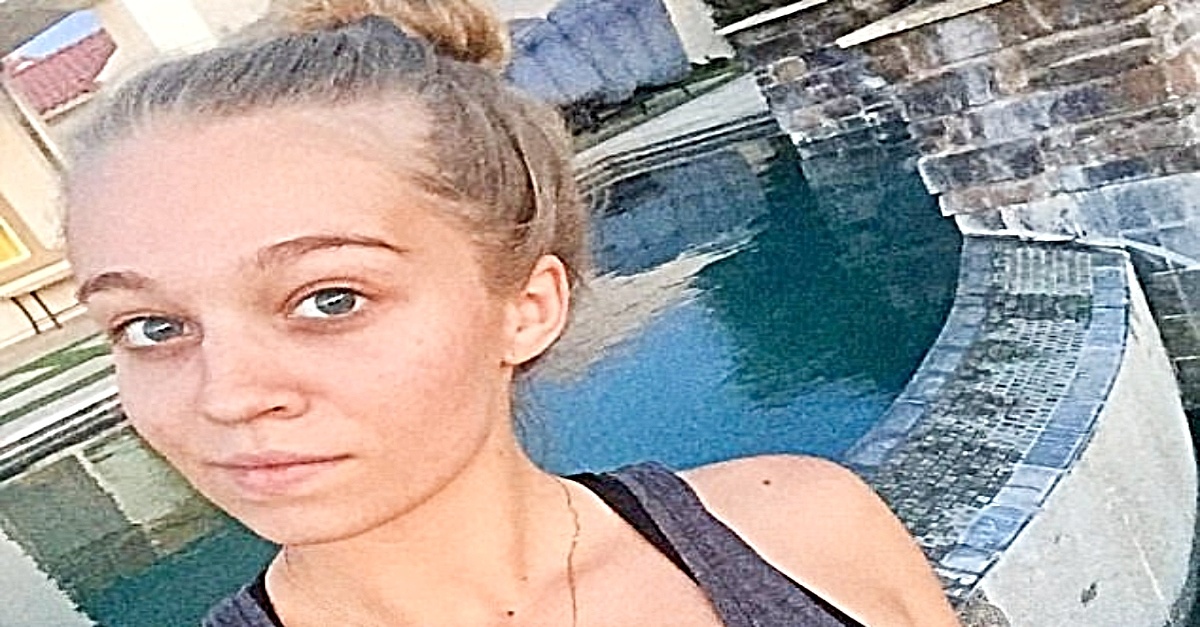 Apparently, in Arizona, a customer thought it was accepted if he gropes a female bartender without consequences.

It was evident he totally underestimated Krystal as she immediately lashed back. The events that followed should send a strong message worldwide that it is in fact not OK to disrespect anybody’s personal space. 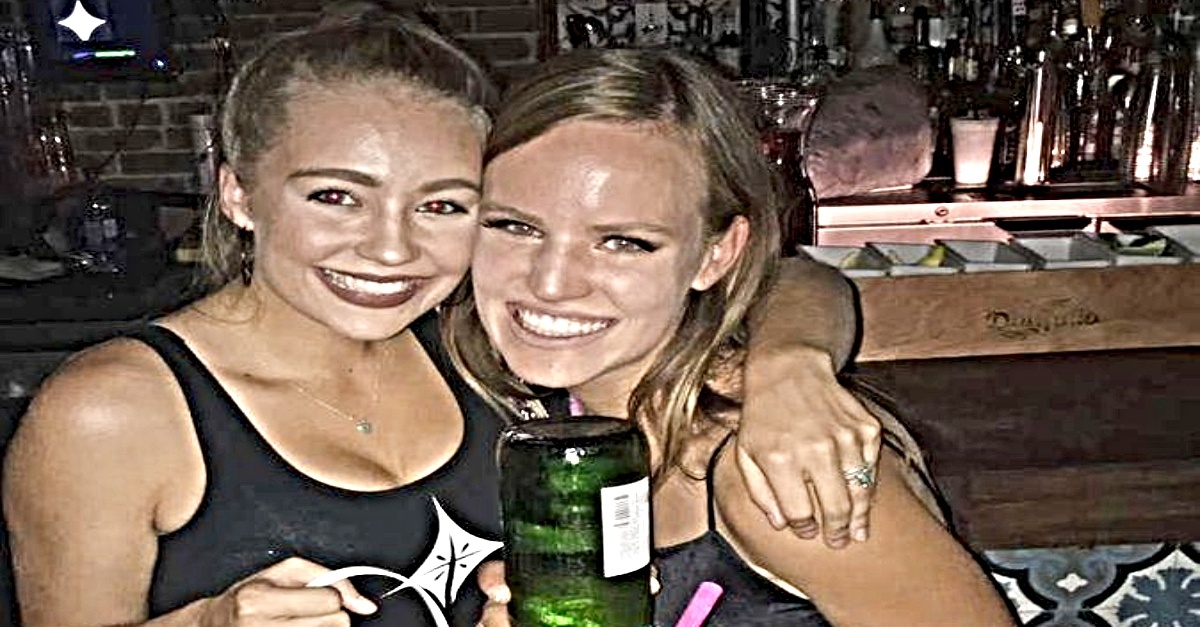 Because she is very much associated with her line of work and dealing with drunk men each night, she has a zero-tolerance policy for any kind of misconduct.

In fact, the US Department of Justice explains, ‘Sexual assault is any type of sexual contact or behavior that occurs without the explicit consent of the recipient.’ Krystal was well aware of that law and made very sure she would not tolerate his violation of her body.

Trick Up Her Sleeve 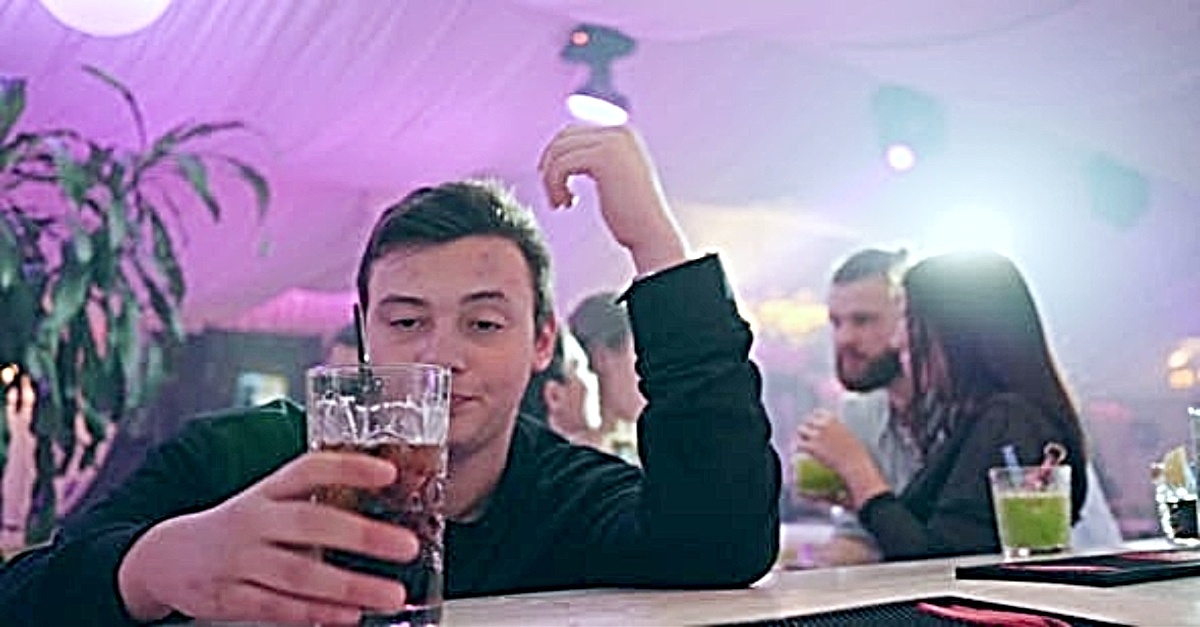 Fortunately, Olsen had the correct preparation for this as she knew, apart from in her work situation, she (and all females out there) could always fall victim to incidents like this.

When equipped with some form of basic self-defense knowledge women can have confidence in their personal protection. Krystal had in fact taken classes to do just that and she wasn’t shy to show off her hard-earned technique. 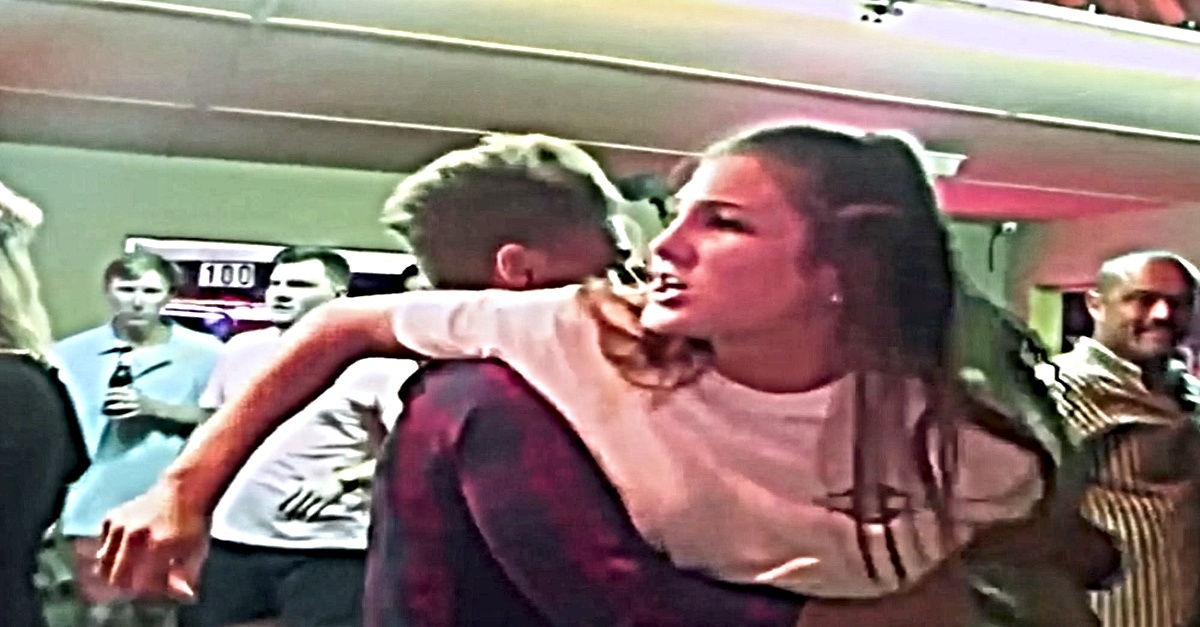 This emphasizes that women young or old, city dwellers or country residents, can have confidence in their personal safety and protection when equipped with some basic self-defense knowledge. Learning a martial art is one of the smartest things you can do.

It’s a great way to stay fit while ensuring your survival in sticky or even life-threatening situations. It gives you the element of surprise because, let’s face it, no one assumes a petite woman is going to retaliate with a perfectly honed MMA move. Taking charge of the situation, Olsen took the man in a chokehold and dragged him out of the bar single-handedly — getting the message out to the predator from the onset that she was more powerful than him and didn’t need anyone’s help to kick him out of the establishment.

With a bruised ego, the man was reluctant to accept this so easily. He retaliated and pushed Olsen against the wall. The altercation was escalating and bar staff came to her aid. The drunk “ groper” was subdued with the security team and detained him until the police arrived. 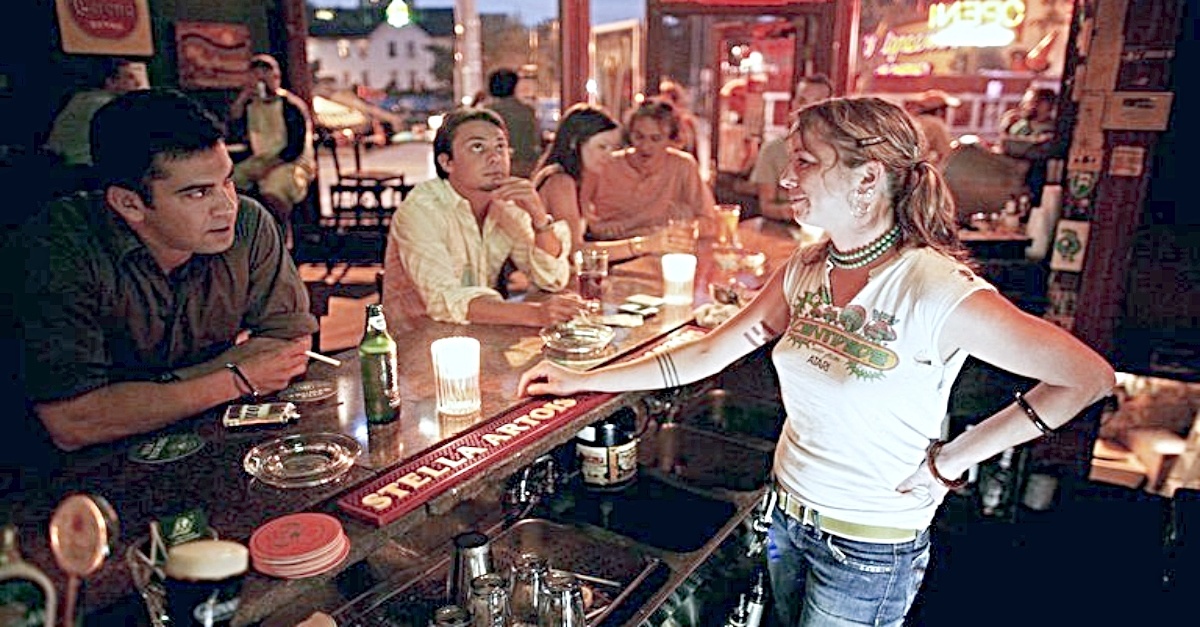 When the police arrived, the cowardly drunk man was crying to them about how she put him in a chokehold after he groped her. With despair, he realized that assaulting a woman has consequences as he was heading to jail.

The thought of fellow prisoners groping him made him start crying like a baby. Olsen snapped a picture of the cowardly groper crying and shared the picture on her Twitter account. 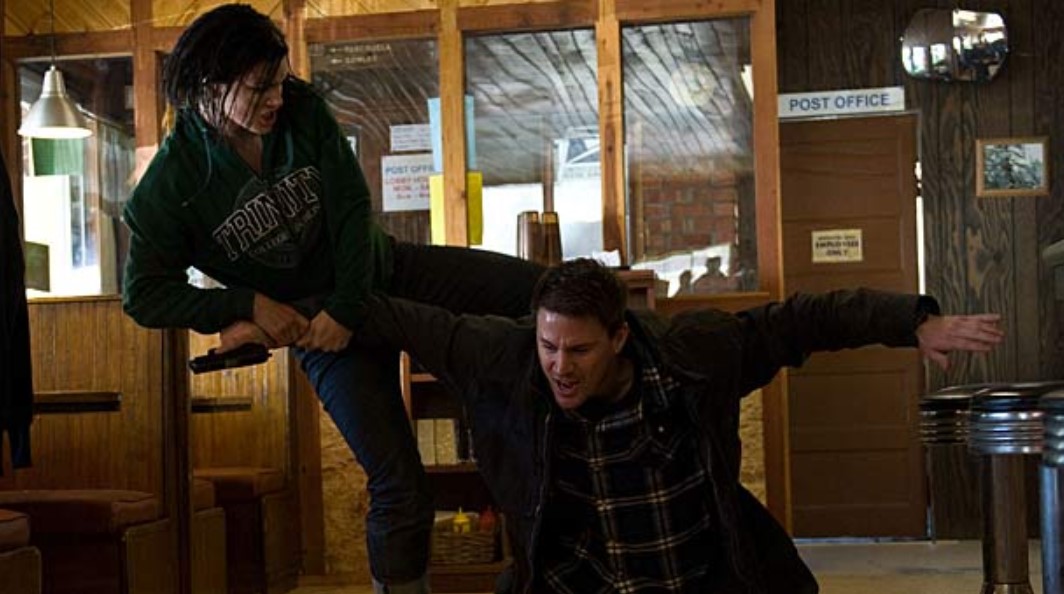 Her post went viral and reactions, however, were mixed. Very few people felt remorse for the pitiful drunken groper crying on the floor and thought it was unnecessary for Krystal to react quite so drastically.

To some people, it was suggested that she should have laughed it off and they implied that women are often grabbing his backside. Apologists for the assaulter insisted that maybe she overreacted and that this kind of sexual assault should not carry legal penalties. Nobody attending the bar in Arizona that evening, even the staff and security, had any idea that the evening would end with the events that followed and the resulting consequences.

An innocent young woman just reporting for her duties to serve the patrons and then having to suddenly have to defend her honor after being disrespected. This all ended in the unfortunate result of a young man having his future reputation tarnished. In addition to this, not to mention his humiliation for ending up on the pavement crying because he had been shown up by a woman who was not prepared to have her dignity threatened, Krystal taught him that it is okay for a woman to fight back when they are in danger.

Women shared their pride that Krystal matched the predator’s aggression with a physical reaction of her own and got the message clearly across that a woman belongs to no one but herself. While the actions of this bartender have been overwhelmingly praised it is a shocking reality of our society. However, it is also very clear that the outcome of her wellbeing is highly teachable.

It is horrible and shameful that women in this day and age still have to live with the constant threat of sexual assault, but the reality is that we don’t have to accept it quietly. An indispensable skill is the ability to defend ourselves which can stop attackers in their tracks. The overwhelming majority of reactions, however, was praise for the bravery of Krystal and applauded her action for defending herself when society often expects women to just put up with that sort of behavior and shrug it off.

There were a lot of concerned parents of daughters who wished that they could grow up just like her, who shared their support for Olsen for standing up to the thug and started sharing their own experiences around predatory men. Some also took the time to reply to critics who said silly things, like this one who suggested she should have laughed it off (and implied women are often grabbing his backside.) The man, proven to be now only a coward and a drunk, showed his true colors by whining about Olsen when the police arrived. He started to cry because she had put him in a chokehold after he groped her.

He realized that assaulting a woman has consequences and knew that he was headed for jail. And the thought of fellow prisoners groping him made him start to cry like a baby. No matter who you are, self-defense is an important tool and life skill to have. It really doesn’t matter where or who you are. Life is uncertain and people can be dangerous, so if you can, don’t leave your life to chance.

Take every opportunity to look out for yourself. Any martial art can be an effective tool and a surprise to any attacker. Prove that you are not defenseless! The security team at the Arizona bar was surprised that Olsen who arrived there from New York was so tough. She simply remarked it was her East Coast nature and she “went all New York on his butt.”

A Commenter shared; “If more men got their butts beat for harassing/assaulting women they’d learn quickly that a woman’s body belongs to no one but herself.” The reaction on social media pointed to the following outcome. One woman explained, ‘Don’t assault someone and they won’t need to defend themselves. Case closed. Open and shut. That simple. Don’t grab strangers.’

Another said ‘He chose to commit a crime. She chose to defend herself.’ It’s shocking because while men often commit this, women seldom defend themselves.’