Alex Jones and his audience are big fans of some out-there, offensive conspiracy theories. These include the belief that the US government controls the weather, that the Sandy Hook shooting was a “false flag attack,” and, of course, that the Democratic Party is connected to a D.C. child-sex ring operating out of pizzerias. But one conspiracy theory has resurfaced repeatedly throughout the years, and it annoys the alt-right radio host to no end.

The theory states that Bill Hicks — a legendary comedian who passed away in 1994 — is still alive today. Furthermore, it argues that the Alex Jones we know today is none other than Bill Hicks in disguise. For many years, Jones has rejected, ridiculed, and even sarcastically affirmed this claim. Unfortunately, these refutations have only spurred the debate. 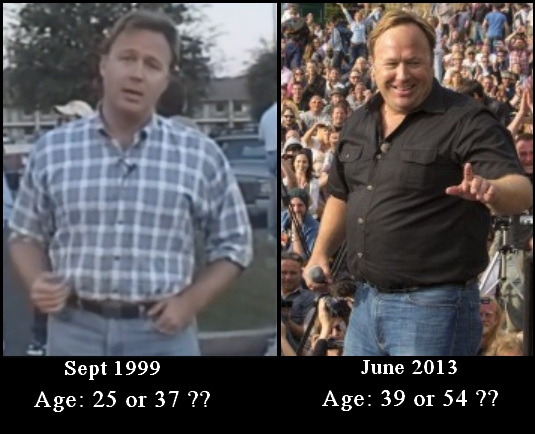 Could a renowned left-wing comedian have blossomed into an alt-right demagogue?

Let’s look at the evidence.

Bill Hicks would be 56 if he were alive today. Alex Jones is only 43 years old. Despite this obvious contradiction, some biographical facts do lend this theory a little credence. Both are from Texas. Both enjoy entertaining conspiracy theories on either side of the political spectrum. Furthermore, the production company that Hicks co-founded, Sacred Cow Productions, has spent about two decades promoting and peddling the work of Jones.

Pundits have even compared the facial structure of the two men, as can be seen below:

There are perhaps some similarities in the eye-nose-lip ratio and teeth structure. Though, despite claims that these men have “exactly the same facial measurements”, there are some clear differences: The eyes only bear a slight resemblance, and the noses are completely different. Cries that Hicks flippantly decided to have plastic surgery to hide his identity are unfounded. Plastic surgery can have a profound psychological effect on an individual; in fact, it is to blame in some cases of divorce. Implying that the comedian had a nose job to hide his identity, but didn’t even switch production companies, is an absurd inconsistency.

Theorists also commonly characterize Hicks’s death as “sudden”, but it wasn’t as unexpected as some would lead you to believe. Hicks’s smoking habit was severe, and he commonly joked about it, making claims like, “I’m not really a heavy smoker anymore; I only get through two lighters a day now.” His eventual death of pancreatic cancer was definitely not unforeseen. He was actually undergoing regular chemotherapy treatments at the time of his death.

Theorists argue that the sharp ideological shift in this transformation is part of an act, and that Hicks is seeking to discredit right-wing media by popularizing a radical, unhinged persona as the new face of the right. This would fall in line with claims made in Jones’s defense in his ongoing custody battle: that he is “playing a character” and is a “performance artist” — but the theory doesn’t hold water.

Jones and Hicks are alike in that they are both figures with deeply-held views, and they both argue that there are fundamental problems with America . . . but their ideological similarities don’t extend far beyond these basic observations.

And, despite the many coincidences, evidence shows that these are two distinct people.

The Theory Doesn’t Pan Out

Hicks and Jones have distinct histories, as can be evidenced through photographs, videos, and testimonies from loved ones. They both have legitimate birth records (much to the chagrin of theorists who want to ironically harass a “birther movement” supporter). The parents of both celebrities have been seen in the public eye.

Without critical thought, conspiracy theorists have a habit of looking far and wide for evidence that supports their view, while making only a cursory attempt at discrediting obvious facts that contradict their narrative. Coming to a logical conclusion requires a rigorous analysis of the facts. In this case, it is technically impossible to prove a negative; we can only show evidence that suggests that the theory is highly improbable. The true burden of proof falls to those making the assertion — and the arguments supporting this theory are not compelling to a rational mind.

Jones is accustomed to having people in public address him as “Bill”, or hearing them repeat the deceased comedian’s name until he responds. In 2014, he made a rare lucid statement when he said, “Bill Hicks is in the ground, folks . . . This isn’t funny — this is sick.” While Jones is definitely deserving of some chiding, it shouldn’t be at the cost of a great comedian’s name. To claim otherwise is a refutation of both known evidence and a disrespect to Hicks’s legacy.