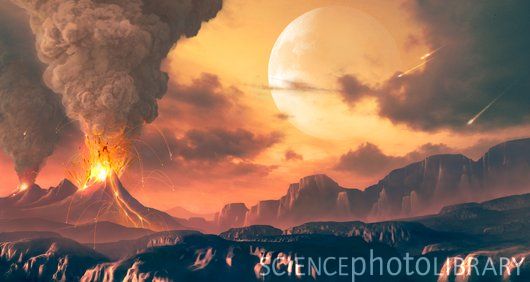 One of the greatest mysteries on Earth is the origin of life. Abiogenesis is the subject of biology and chemistry that focuses on the emergence of life from non-living matter.

While many aspects of abiogenesis are not yet fully understood and many of the specific hypotheses of how life arose are undergoing a lively debate, scientists researching abiogenesis agree on several key points regarding the origin of life.

Scientists agree that even cells, the basic and simplest unit of life, are staggeringly complex. Cells living today demonstrate this complexity through the structure of their genome and the often visually astounding molecular “machinery” made of protein and sometimes also ribonucleic acid (RNA). In order to understand how life could have arose, understanding towards what biological end these molecular machines serve and, just as importantly, how these molecular machines are constructed within the cell is a useful endeavor.
Some properties of life are common throughout all organisms (viruses excluded):

Two of the most important properties of cells with respect to abiogenesis are replication and metabolism. Metabolism may be divided into two more or less distinct pathways. Catabolic metabolism is the cell’s use of complex materials, such as sugars, lipids, and protein, to produce energy by breaking these materials down into their simpler components, such as water and carbon dioxide.

Where did the raw materials for life come from?