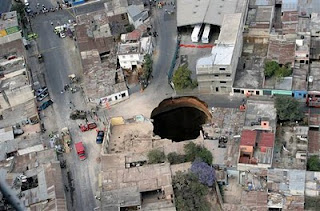 This past summer, the flood waters from tropical storm Agatha caused a massive sinkhole to finally collapse and expose itself in Guatemala.  The hole is a startling 30 stories deep, and 60 feet (18 metres) wide.  When I originally saw the images, I thought they where Photoshopped and all we had was another Internet meme… so I was shocked to learn that these were actual images of the sinkhole.

What causes this natural wonder?

Usually, sinkholes form in an area where there is dissolvable bedrock, like limestone.  These areas are said to have a “Karst topography“.  Water percolating through the ground dissolves carbon dioxide creating a weak acid, which slowly eats away at the limestone.  Eventually, the limestone will form an empty cavity where water will collect as it pools from a surrounding aquifer and the water percolating from above.

If there is significant pumping and removal of that water, the filtration process will be accelerated, and the pressure excerpted from the water (on the cavity’s ceiling) will be reduced.  This increases the size of the cavity, until the roof can no longer support its own weight and collapses during a period of heavy rain or vibration.

The image below helps to describe how sinkholes work: 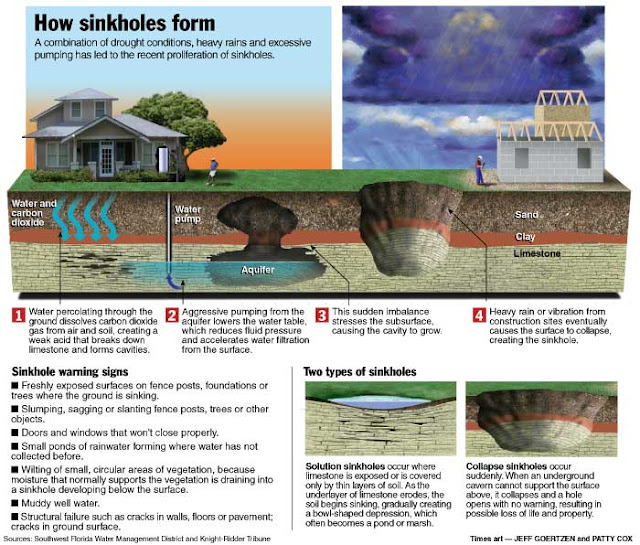 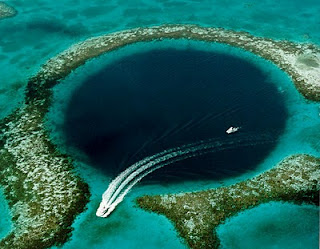 While the Guatemalan sinkhole has received the most press recently (upper right-most image at the top of this article), there are a number of other sinkholes that are equally spectacular.

Sima Humboldt (Sima Major) is another massive sinkhole located on the summit of the plateau of Sarisariñama tepui, in Bolívar, Venezuela. Its maximum width at its upper rim is 352 metres, below it is 502 metres. 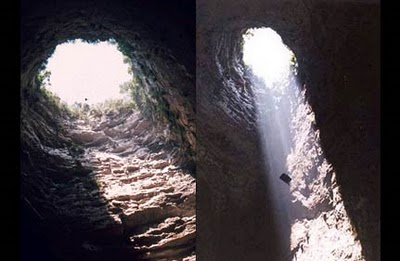 The Cave of Swallows also cave situated in San Luis Potosí, Mexico. The entrance lies along a sloped section of karst, and measures approximately 49 by 62 m). The pit opens up to a room that measures approximately 303m by 134m. The low point of the entrance provides a 333m freefall drop to the bottom of the cave while the high point provides a 372m freefall drop. This makes the Cave of Swallows the largest cave shaft in the world.

The Kravice waterfall on the Trebižat river in Bosnia and Herzegovina demonstrates Karst geology and landscape. The image, bottom right, demonstrates a karst landscape in Minerve, Hérault,France.

In both cases, the landscape is formed by the dissolution of layers of soluble bedrock, providing the landscape with sinkholes and caves scattered throughout.

The next time you hear of sinkhole opening up in the Earth, you will now have the basics of how they work.