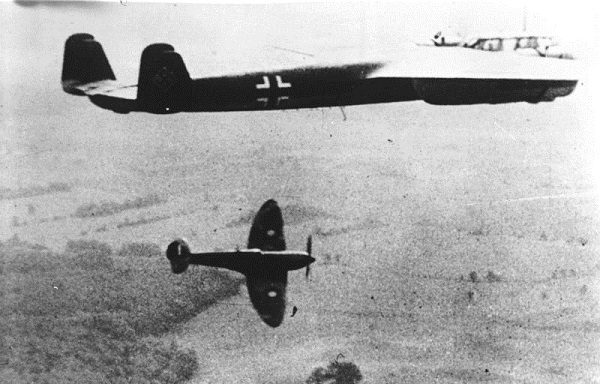 It may have taken place 75 years ago, but the Battle of Britain remains one of the United Kingdom’s proudest and arguably most important military achievements. In helping to prevent a German invasion of Britain during World War II, it played a crucial role in thwarting the Nazi war machine.

Three-quarters of a century on, the nation is taking the time to remember this crucial battle. From dedicatory air shows to the release of a new 50p coin in memory, there is plenty going on to bring people’s minds back to this important time in our country’s history. The Battle of Britain Hall at the RAF Museum has recently been refurbished in time for the anniversary and the RAF Museum shop is stocking 75th anniversary mementos, including books and special edition model sets to help people remember or learn about this tense period of fighting between mid-July and late October 1940. For some background on what this time meant to Britain and the world as whole, keep reading.

Hitler had intended to invade Britain in an operation he code-named Sealion. For his plan to work though, he needed his air force, the Luftwaffe, to gain control of the skies over the south of England. This was why, on July 10th 1940, he ordered his military to begin an aerial assault on Britain. German planes inflicted major damage on British planes and infrastructure, and on the country more generally. However, with its Hawker Hurricanes and Supermarine Spitfires, the  RAF ultimately succeeded in seeing off this challenge in the skies, meaning Hitler’s invasion plot was thwarted.

This was widely considered to be a turning point in the war. Although the conflict in Europe was to continue for several more years, victory in the Battle of Britain meant the UK could serve as a launch pad for forces from allied countries including the United States and Canada. Four years later, the Allies used Britain as a base for their invasion of Nazi-occupied Europe. Dubbed operation Overlord, this campaign proved crucial in bringing the conflict with Germany to an end.

The Battle of Britain was an international effort. Men from Commonwealth nations such as Australia, New Zealand, South Africa and Canada played important roles in the British Fighter Command. Military personnel from European countries including Poland, France, Belgium and Czechoslovakia also served in the campaign. For example, the War Cabinet created two Polish fighter squadrons, while the highest scoring pilot of the battle was a Czech man named Josef František.

As well as the fighters, a huge support crew helped lead the RAF to triumph. Maintenance engineers, fitters, riggers and armorers serviced the planes, while factory workers helped to produce the aircraft and munitions. In addition, thousands of volunteers manned observation posts and members of the Women’s Auxiliary Air Force operated radars and helped to track raids.

Given the importance of this battle and the large number of people involved in it from Britain and across the globe, it’s not hard to see why it means so much to so many individuals. Without the hard work, skill and bravery of those who took part in the RAF’s campaign, World War II may have had a very different outcome.