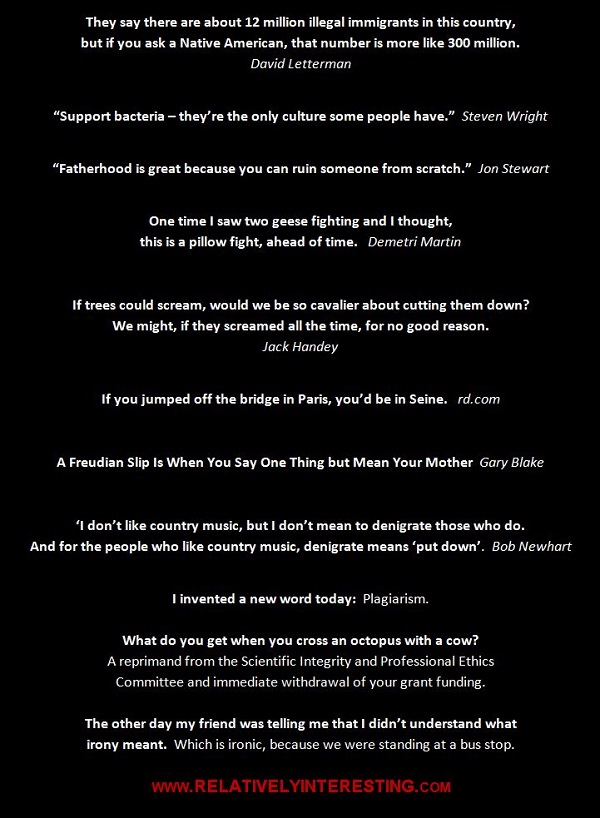 Yes, these are some pretty clever jokes, but they’re not just for the intellectually elite.  We’re sure that some undergrads, a few people with a Masters degree, and a handful of Ph.D candidates might get them too.

You know, the common folk.

For the rest of us – the intellectually elite – please enjoy.

They say there are about 12 million illegal immigrants in this country,
but if you ask a Native American, that number is more like 300 million.
David Letterman

“Support bacteria – they’re the only culture some people have.”
Steven Wright

“Fatherhood is great because you can ruin someone from scratch.”
Jon Stewart

One time I saw two geese fighting and I thought,
this is a pillow fight, ahead of time.
Demetri Martin

If trees could scream, would we be so cavalier about cutting them down?
We might, if they screamed all the time, for no good reason.
Jack Handey

If you jumped off the bridge in Paris, you’d be in Seine.
rd.com

What do you get when you cross an octopus with a cow?
A reprimand from the Scientific Integrity and Professional Ethics
Committee and immediate withdrawal of your grant funding.

The other day my friend was telling me that I didn’t
understand what irony meant.
Which is ironic, because we were standing at a bus stop.