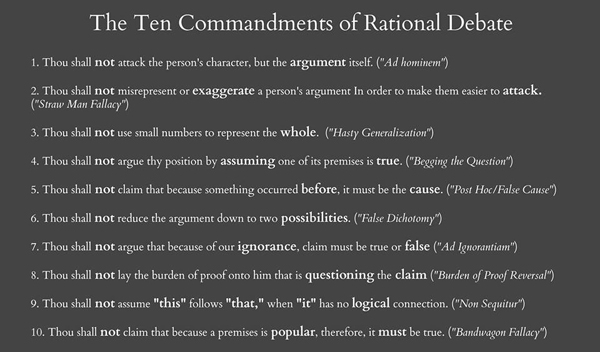 Looking for an edge so you can win your next big argument?

Learn the 10 Commandments of Rational Debate and use them against your enemy as you obliterate their argument point by point (rationally, of course).  Knowing your logical fallacies and how the brain can deceive even the brightest of minds is the first step towards winning an argument.

These are 10 of the more popular logical fallacies, but there are many others you need to learn in order to master the art of debate…

The 10 Commandments of Rational Debate

1. Though shall not attack the person’s character, but the argument itself. (“Ad hominem”)

Example:  Dave listens to Marilyn Manson, therefore his arguments against certain parts of religion are worthless. After all, would you trust someone who listens to that devil worshiper?

2. Though shall not misrepresent or exaggerate a person’s argument in order to make them easier to attack. (“Straw Man Fallacy”)

Example:  After Jimmy said that we should put more money into health and education, Steve responded by saying that he was surprised that Jimmy hates our country so much that he wants to leave it defenceless by cutting military spending.

3. Though shall not use small numbers to represent the whole. (“Hasty Generalization”)

Example:  Climate Change Deniers take a small sample set of data to demonstrate that the Earth is cooling, not warming. They do this by zooming in on 10 years of data, ignoring the trend that is present in the entire data set which spans a century.

4. Though shall not argue thy position by assuming one of its premises is true. (“Begging the Question”)

Here, Sheldon is making the assumption that the Bible is true, therefore his premise – that God exists – is also true.

5. Though shall not claim that because something occurred before, but must be the cause. (“Post Hoc/False Cause”).

This can also be read as “correlation does not imply causation”.

Example:  There were 3 murders in Dallas this week and on each day, it was raining. Therefore, murders occur on rainy days.

6. Though shall not reduce the argument down to only two possibilities when there is a clear middle ground. (“False Dichotomy”)

Example:  You’re either with me, or against me. Being neutral is not an option.

7. Though shall not argue that because of our ignorance, the claim must be true or false. (“Ad Ignorantiam”).

Example:  95% of unidentified flying objects have been explained. 5% have not. Therefore, the 5% that are unexplained prove that aliens exist.

8. Though shall not lay the burn of proof onto him that is questioning the claim. (“Burden of Proof Reversal”).

Example:  Marcy claims she sees the ghosts of dead people, then challenges you to prove her wrong. The burden of proof is on Marcy, not you, since Marcy made the extraordinary claim.

9. Though shall not assume that “this” follows “that”, when “it” has no logical connection. (“Non Sequitur”).

Example: If you do not buy this Vitamin X supplements for your infant, you are neglecting your her.

10. Though shall not claim that because a premise is popular, therefore, it must be true. (“Bandwagon Fallacy”).

Example: Just because a celebrity like Dr. Oz endorses a product, it doesn’t make it any more legitimate.